When I Tried to Help a Blind Man, He (Rightfully) Put Me in My Place

On a cold day in late December, I was in an unusually good mood; I had woken up on the right side of the bed, my coffee was strong, and Spotify’s “Have a Great Day” playlist blasted through my headphones sending my brain messages to be positive and stay cool! HECK YES! THIS WEDNESDAY IS GOING TO R-O-C-K!

As I strutted through the streets of New York, I couldn’t help but compliment the surrounding strangers. Internally compliment them, of course; I’m not crazy, I was just cheerful.

Fierce hat, Lady With the Hat!

Hey, Kid! Those braces really bring out your eyes!

Mr. Man was on the shorter side; he wore a long, brown coat, dapper-looking shoes, and sunglasses that implied he was a fashionista of sorts.

“Excuse me, sir?” I began, beaming with charitable thoughts and selfless intentions. “Can I help you get to where you need to go?” The man smiled, and raised his hand to politely refuse.

“No, thank you, dear. I’m just trying to get to the bus stop, and I have a feeling it’s just up the next block.”

I wasn’t going to let Mr. Man get off that easily.

“Please, it’s no bother! I can walk you there!” I insisted.

“Well… okay,” Mr. Man reluctantly agreed, and with that I looped my stupid arm through his, and we walked.

We talked as we walked. And by “we talked,” I mean I talked at him. I wouldn’t shut up. I told him about my schooling (“I graduated from the University of Michigan — GO BLUE!”), why I moved to the city (“to be an actor, or well, really, I just want to make a living by making people laugh!”), and where I lived (“the east side of Manhattan, but it’s too expensive, so I have a feeling I’ll be in Brooklyn by the spring”). I told him about how being single and 25 in New York was nothing like Sex and the City made it out to be, and that my survival job was really bringing me down.

“It’s just… life should be about happiness, you know? Not serving douche bags from the tristate area overpriced popcorn shrimp.” Short of giving Mr. Man my social security number, I really opened up.

As I was midway through telling him the story of my parents’ separation, Mr. Man stopped me.

“Sweetheart, have we passed the 68th Street bus stop?” We had because we were now on 75th.

“Uh… we…” I panicked slightly. Darn! This is not how I wanted my philanthropic efforts to go! “Yes, yes we have. But that’s okay because I can take you to the next one!”

Mr. Man exhaled. “Okay, just look for the nearest lamp post that has the MTA bus logo on it, okay?”

I cheerfully agreed as I kept my eyes out for the “lamp post.”

Now, unfortunately the lamp post I was imagining was something à la The Lion, the Witch and the Wardrobe. You know, an English-looking device with a glowing white bulb and a Mr. Tumnus character playing the lute trying to coax Lucy into eating more Turkish delight. So it makes sense that I completely passed three (four) more bus stops.

I was wildly embarrassed. “82nd Street,” I whispered.

“Where is the nearest bus stop from here?” he demanded. “I’m going to find out RIGHT now!”

I pulled out my smartphone to ask Siri where the next nearest station was. To my dismay, my phone was dead. Not cool, Spotify and your battery-drowning ways!

Mr. Man came to a full stop, turned his face to mine and said, “You’ve got to be kidding me.”

“And you thought you would just help me because I’m blind and you think I need help?”

“Well, you’re not being very helpful.”

So I did the next most helpful thing I could think of: I started asking other New York City strangers if they knew where the closest bus stop was.

Eventually, a nice Older Woman told us we were a half a block away from the nearest uptown stop. “I’m headed there now, do you want me to take the two of you there?” Older Woman looked me and Mr. Man up and down; I think she thought I was trying to abduct him.

“Are you sure?” I asked hopefully.

“One-hundred-percent positive. Let me tell you something, young lady.” Mr. Man lowered his voice and spoke with a seriousness only young children being reprimanded can truly empathize with: “I have been blind my whole life. And at times, I do need help, but when I need it, I ask for it. Don’t assume that just because you can see and I can’t that you know where you’re going. Maybe before you help other people you should help yourself first.”

My intentions were pure, but the execution was desperately pathetic and extremely inconvenient for the innocent man.

As I watched Mr. Man and Older Woman walk away, I just sort of stood there. Ouch, that was… rude. And actually very honest and truthful. You know those moments in your life where the universe tells you to shut up? Well, this was my moment. 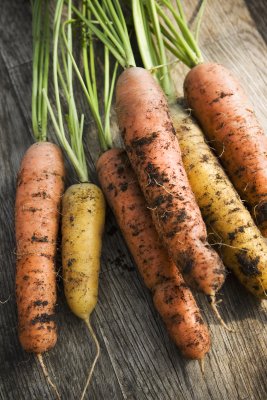 How Growing Carrots Almost Got Me Arrested
Next Up: Editor's Pick