In 1978, Rolling Stone magazine gave me my first overseas assignment–in Lebanon, covering the first Israeli military incursion. I got press credentials from the Palestine Liberation Organization in Beirut, then jumped into a taxi with three other journalists and headed for the front. It was a wild drive that culminated at the Litani River, where we were stopped at a PLO checkpoint and asked for our credentials.

Two teenagers guarded the checkpoint and they were a sight to behold: They were wearing platform shoes, love beads, U.S. college t-shirts–one was Texas Tech; I don’t recall the other–and brandishing Kalashnikovs. One brandished his Kalashnikov right on through the open window and into my chest and started screaming something. “He wants your credentials,” the taxi driver said.

I fished out the credentials, handed them to the kid, who read them intently, then showed them to his friend, nudging him in the ribs. “You mean like,” he said to me and the two of them began to sing, “My papa was a rollin’ stone…”

Great story. And that’s how I remember it. But is it true? Yes, I’d swear it…but maybe not on my life. Did the kid jam that Kalashnikov in my chest or did he just point it at me? Did the two kids begin to sing? I’d love to think so.

I do remember being scared witless. And it may–or may not–be that I’ve exaggerated those aspects of the story as an ego gratifying thing or, maybe, to convey the terror and relief I felt at the time. Or maybe not. It may just be true.

All of which is to say: I understand Brian Williams’ predicament. Our memories are not very reliable, especially in life-and-death situations. Part of it is, yes, our need to aggrandize the risks we take; part of it is our minds’ reaction to fear. Part of it is that journalism involves story-telling and sometimes the story gets carried away with itself. Mistakes are made. My story may be minor compared to the one Brian Williams told–but that one story should not imperil his distinguished career. His apology was not elegant, but it should be accepted.

In the end, I find the phenomenon of the schadenfreude circus that has erupted–yet again–to be overwrought and unnecessarily brutal. And the sudden reports, from unnamed NBC staffers, that nobody ever liked Williams anyway, to be too convenient to be credible. And the judgments about whether Williams should be fired, from pundits who never saw the inside of a chinook helicopter, self-righteous and gagging.

The next time Williams finds himself in a war or storm zone, I’ll be watching with appreciation, with the absolute conviction that, after this sad moment, his reporting will be impeccable. 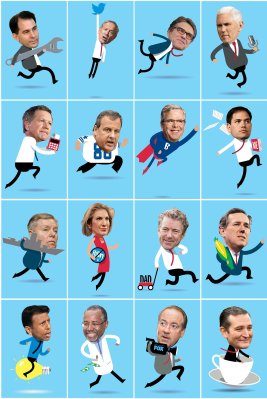 See How 16 Republican Presidential Hopefuls Are Running Now
Next Up: Editor's Pick