Why the Founding Fathers Wouldn’t Have Been Anti-Vaxxers

Postcard of 'The Signing of the Declaration of Independence', painted by John Trumbull
Hulton Archive / Getty Images
By Michael Shermer

Are you a vaccination skeptic? Or are you skeptical of the vaccination skeptics? Your answer will most likely depend less on science and more on political ideology. The science jury is in when it comes to vaccinations, as it is for climate change and evolution. Vaccinations work, climate change is real and evolution happened. But, though skepticism in all three cases tends to be the product of politics, to doubt science is to run up against the very heart of America’s political framework.

The founding principles of America were the product of 18th century Enlightenment thinkers who were inspired by 17th century scientists such as Galileo and Newton. (This is an argument I make in my new book, The Moral Arc: How Science and Reason Lead Humanity Toward Truth, Justice, and Freedom.) The experimental methods and analytical reasoning of science that these Enlightenment thinkers consciously applied to solve social, political and economic problems created the modern world of liberal democracies, civil rights and civil liberties, equal justice under the law, free minds and free markets, and prosperity the likes of which no human society in history has ever enjoyed.

The founding fathers of the United States often referred to the “American experiment” and to democracy as an “experiment” because democratic elections are analogous to scientific experiments: every couple of years you carefully alter the variables with an election and observe the results. If you want different results, change the variables. Part of the reason that democracies systematically replaced autocracies was because of the scientific appeal of empowering individuals with a methodology to solve problems instead of an ideology to obey.

Many of the Founding Fathers were, in fact, scientists who deliberately adapted the method of data gathering, hypothesis testing and theory formation to the construction of a nation. They understood that no one knows how to govern a nation in all it’s complexities, and so they constructed a system that would allow constant tinkering to adjust for unforeseen circumstances. Instead of thinking about government as a place where power is up for the taking, they saw it as a social technology for solving problems. Their conception of democracy was not dissimilar to their vision of science, as Thomas Jefferson articulated it in 1804: “No experiment can be more interesting than that we are now trying, and which we trust will end in establishing the fact, that man may be governed by reason and truth.”

Consider the principles underlying the Declaration of Independence. We usually think of this great document as a statement of political philosophy, but it was, in fact, a type of scientific argument. Consider this sentence, one of the most famous in all political philosophy: “We hold these truths to be self-evident, that all men are created equal….” In Thomas Jefferson’s first draft he penned “We hold these truths to be sacred and undeniable.” Why did he change it? He didn’t. Benjamin Franklin did. Here is what happened, as described by Walter Isaacson in his biography Benjamin Franklin: An American Life, in a passage that reveals the scientific foundation of one of the greatest political tracts ever published:

Sticking with science paid off. Where people embraced the Enlightenment worldview that morals and values must be grounded in reason and science, it was no longer acceptable to merely assert that your beliefs, morals and ways of life are better than others. After the Enlightenment it was necessary to provide reasons for your beliefs and values, and those reasons had better be grounded in rational arguments and empirical evidence or else they could be ignored or rejected.

By contrast, countries that quash free inquiry, distrust reason and practice pseudoscience, such as Revolutionary France, Nazi Germany, Stalinist Russia, Maoist China and, more recently, fundamentalist Islamist states, have historically tended to stagnate, regress and often collapse. Theists and post-modernist critics of science and reason often label the disastrous Soviet and Nazi utopias as “scientific,” but their science was a thin patina covering a deep layer of counter-Enlightenment, pastoral, paradisiacal fantasies of racial ideology grounded in ethnicity and geography.

This idea of equal rights for individuals is the product of the Enlightenment, as is the principle of free speech and the use of reason in an open dialogue that forces us to consider the merit of what the other person is saying. And if the other person makes sense, their superior ideas gradually chip away at our prejudices. Reason alone may not get us there. We need legislation and laws to enforce civil rights. But these institutions are premised on law being grounded in reason, and the legislation being backed by rational arguments. Without that, there is no long-term sustainability to moral progress, as it is just a matter of might makes right. To make morals stick you have to change people’s thinking. And more than any other it is the Classical Liberal worldview grounded in reason and science that is bringing about moral progress—even when politics get in the way.

Michael Shermer is the Publisher of Skeptic magazine, a monthly columnist for Scientific American, the host of the Skeptics Distinguished Science Lecture Series at Caltech, and a Presidential Fellow at Chapman University. His latest book is The Moral Arc: How Science and Reason Lead Humanity Toward Truth, Justice, and Freedom (Henry Holt, 2015). 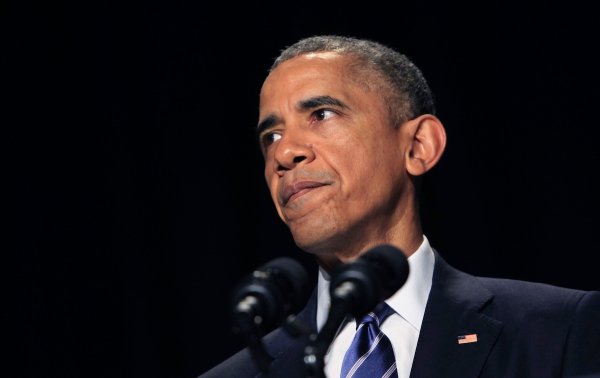 Why Obama Was Only Half Right to Call Out Christianity Over Jim Crow
Next Up: Editor's Pick