By Cubie King and Olivier Laurent

“I would never think of myself as a role model,” says Lynsey Addario. The 41-year-old, twice-kidnapped, mother-of-one, award-winning photojournalist has released, this month, her first book: an autobiography of her life as a Connecticut-born photographer who has spent the last 15 years witnessing the true human cost of war, particularly for women across the world.

And yet, even if Addario declines to be defined as a role model, with It’s What I Do, she hopes that her own experience, fraught with doubts about her intertwined professional and personal lives, will encourage other women to define their own paths. “[This book is the continuation of my work] as a messenger of experiences,” she tells TIME. “In this case, they are my own experiences.”

Addario didn’t set out to write an autobiography. Her goal, at first, was to produce a monograph of her work. “I’ve always wanted to do a photo book but I’ve never done one because I’ve never felt ready, I just didn’t feel my work was good enough,” she says. “I’ve seen so many photographers rush to do books the minute they start shooting but one great thing about photography is that the images don’t go away, so the more I sit with these images, the more I learn which ones have had the most impact.”

In a career that spanned two wars in Afghanistan and Iraq, and saw Addario travel to Cuba, India, Pakistan, Israel and Libya, the photographer has had many close calls. She was briefly abducted in Iraq in 2004, and was injured in a car accident in Pakistan in 2009. But, it’s her second abduction, in Libya in 2011 that has come to define, for better or worse, her career as a woman photographer – bringing with it worldwide attention to Addario’s work and the impetus for her memoir.

When Addario was released after five days in captivity, she took a step back from the frontlines, she says, and started contemplating the idea of producing her first monograph. “I was having conversations with Aperture about trying to do a photo book [until] I found out [the photojournalists] Tim Hetherington and Chris Hondros had been killed in Libya. It threw me for a loop,” she says. “I had survivor’s guilt. It sort of brought back the trauma of my own experience in Libya in a way that was even exacerbated. I didn’t shun photography, but I felt I needed to tap in into something different.”

The thought of writing a book was, at first, daunting “but it wasn’t as daunting as doing a photo book,” she says. “With photography, I always think that it’s not good enough,” while writing simply involved getting the facts down on paper. “I kept journals for many years,” Addario tells TIME. “I also relied pretty heavily on email correspondence between my family, my friends and myself. So it was more of a matter of pulling all of it together.”

The result is a series of vignettes and moments that “really struck in my mind,” she says. From her first trips in Afghanistan and Pakistan, where she had to play a game of cat-and-mouse with a clerk at an Islamabad embassy in order to get a visa, to her delicate relationships with men over the years, It’s What I Do, is about the difficult, and often unattainable, balance that most photographers struggle with in their professional and personal lives.

But, it’s also a book about a photographer’s commitment to her subjects, especially women, who, as Addario says, are victims of their birthplace.

“As a photographer and as a journalist, I am privy to people’s most intimate moments and it’s always been surprising by how much people open up to me,” she says. “All of these moments – women giving birth, women talking about rape – are incredibly personal and incredibly private.”

Being afforded this kind of access, Addario feels she has a responsibility to show the world what she’s seen. “I feel a huge pressure to be successful in communicating their trauma. I have to make sure that I take this information and disseminate it in a way that’s useful to them in the long term; that will prevent other women from going through what they went through. I can’t imagine not dedicating my life to trying to stop those things from happening.”

But Addario also feels guilt, she says. “Why was I so lucky to be born in Connecticut and to be offered this privileged life when so many people around the world are born into lives of extreme labor and hardship. I constantly struggle with this. Why are some people luckier than others?”

Luck almost ran out for the photographer when she was abducted, alongside her colleagues Anthony Shadid, Stephen Farrell and Tyler Hicks in Libya on March 16, 2011. But, the experience, recounted in great details in It’s What I Do, only reinforced Addario’s commitment. “It actually gave me strength to realize that I’m not a victim,” she tells TIME. “I am a woman who makes these decisions to go to war zones. I know what the risks are. I know it’s possible that I could to get kidnapped. I know it’s possible that I could get assaulted. Those are the risks I take in order to tell these stories.”

She continues: “When I was in Libya, there are distinct moments and images that are seared in my brain that I’ll never forget: being tied up, blindfolded and groped, begging for my life, and begging for someone not to rape me. In these moments, I’ve thought so much about all the women I photographed over the years and how unbelievably strong they were. That was such a source of strength because I thought that if they could get through it when they’ve gone through so much worse, [I could get through it too].”

After her kidnapping, Addario developed a more comprehensive understanding of the people she had been covering all these years. Similarly, she says, becoming a mother was also a defining moment in her life as a photographer. “When I became a mother, I realized so much more about the mothers I’ve photographed and that love that is inexplicable for someone that doesn’t have a child.”

But Addario was ambivalent about becoming a mother, she tells TIME. “I just thought that my life was going to end and I would never be able to photograph again. I couldn’t figure it out because I didn’t have any role models, I didn’t know a single woman conflict photographer who had children.”

This lack of female role models, which has constantly plagued the male-dominated world of photojournalism, is best exemplified in the comments Addario has received over the years from readers. “Everyone is having a field day judging what a horrible woman I am, what a bad mother I am,” she says. “I find it fascinating that anyone feel like they have the right to tell me how to live my life.”

“All of these people,” she adds, “seem to forget that the places I’m photographing are rife with women and mothers. Why are they not up in arms about those women and how they have to live? I think it’s very easy to judge.”

Before writing this book, Addario knew she’d become, once again, the target of such commentary. “I knew every single person would come out of the woods and feel they have a right to judge a pregnant woman, a mother,” she says. “But where are all the people screaming at all the men who leave their pregnant wives at home and go off to a war zone? Why is there no uproar about that?”

And while Addario hopes her book will foster a dialogue, for her, the most important goal was to be honest and open about her life and her struggles. “Sometimes I’ve made mistakes,” she says, “and sometimes I haven’t, but I’ve always learned something, and that’s what I want to teach my son.”

Lynsey Addario is a photojournalist represented by Getty Images Reportage. Her memoir, It’s What I do: A Photographer’s Life of Love and War, is published by Penguin Press.

Cubie King, who produced this video interview, is a senior producer at TIME. 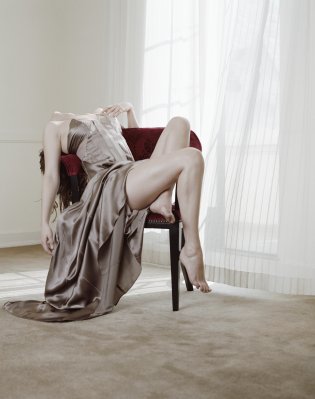 Go Behind the Scenes of TIME's Fifty Shades of Grey Photo Shoot
Next Up: Editor's Pick