Houthi Shiite Yemenis hold their weapons during a rally to show support for their comrades in Sanaa, Yemen, Feb. 4, 2015.
Hani Mohammed—AP
By Noah Rayman

The Shi’ite rebel group that controls the Yemeni capital dissolved parliament on Wednesday, bringing to an abrupt and potentially explosive end the political deadlock among rival factions.

The Houthi movement, which overran Sana’a in September, had been overseeing talks to form a new government since the group’s aggression prompted President Abd-Rabbu Mansour Hadi to resign last month. But with the lapse of a Wednesday deadline, the Houthis moved to act on their own terms.

In a televised statement, the rebels said they would form a five-member presidential council to lead the country during a transitional period of up to two years, proclaiming the developments marked “a new era that will take Yemen to safe shores,” according to the Associated Press.

But the move threatens to plunge the fractured nation deeper into sectarian turmoil. While the Houthis, members of a minority group of Shi‘ite Muslims from the north, have seen a recent surge in support, their power grab risks further alienating Sunni tribesman and empowering al-Qaeda in the Arabian Peninsula, the powerful affiliate of al-Qaeda that controls swathes of the country’s south.

As TIME reported when tensions spilled over in Sana’a last month, the rise of the Houthi movement and the removal of a key ally in Hadi has posed a particularly acute problem for the U.S. in its fight against al-Qaeda:

So far, Washington appears to be adapting to developments in Sana’a. A drone strike on Jan. 31 killed a top al-Qaeda cleric, and a senior U.S. official indicated the U.S. maintains intelligence ties with the Houthis. But whether the Houthis can maintain stability and prevent a prolonged sectarian conflict remains to be seen. 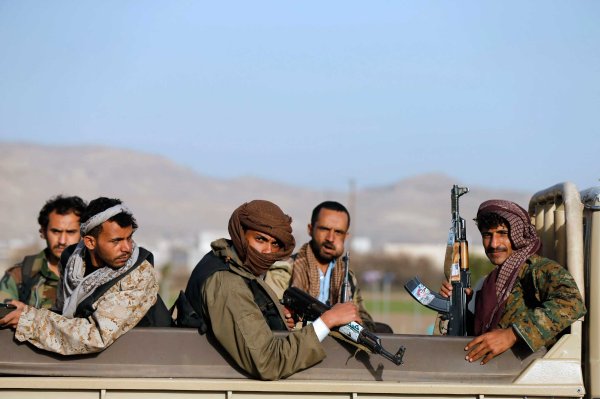