A polio vaccinator administers oral drops to a child in the Dawanau district of Kano, northern Nigeria in 2013.
Aminu Abubakar—AFP/Getty Images
By Aryn Baker

For all that ails Nigeria —Boko Haram jihadists rampaging across the country’s northeast, record unemployment and the plummeting price of crude for an oil-dependent government — one thing has been going very right. Nigeria has not seen a case of polio since July 24, 2014. If it can stay that way another six months it will be removed from the World Health Organization’s (WHO) polio-endemic list, leaving just Pakistan and Afghanistan behind. But the general election, on February 14, has global public health officials worried that Nigeria might yet backslide: every election since 2003 has been followed by a surge in polio cases.

A quarter of a century after it was eradicated in the United States, polio is poised to become the second disease since smallpox to be wiped out in the wild. That progress has been achieved through a concerted effort by UNICEF, WHO and Rotary International to establish strict vaccination protocols for governments in affected countries. All it takes is two drops of the vaccine, administered three different times, to render a child immune. In order to achieve that, governments usually hold vaccination drives in affected areas every six weeks. In 1988 there were 350,000 cases of polio in 125 countries; in 2014 that number went down to 339 cases. Which is why this year is such a nail biter for Africa. When Nigeria is declared polio-free, after three years without a case, the rest of the continent can start to breathe a little easier.

Up until now, the greatest concern for public health officials has been Nigeria’s insurgency, which has prevented vaccinators from reaching children in violence prone areas. The upcoming poll has added another layer of worry, says Carol Pandak, Rotary International’s PolioPlus program director. “Elections always pose a threat of hindering polio eradication efforts,” she says via email. “Not only in that government officials are distracted leading up the elections, but possible violence and instability following the elections can have a significantly negative impact on polio eradication efforts.” The post-election surge in cases was most apparent following Nigeria’s 2011 Presidential elections, says Dr. Tunji Funsho, head of Rotary International’s Nigeria program. Election results were met with three days of rioting that killed 800 in the worst outbreak of violence since the 1967-70 civil war. The protests “compromised the security situation and prevented vaccinators from reaching a large cohort of children.”

Elections in India, which was declared polio-free last year, were largely spared the post-polling polio surge because of the country’s relative stability, notes Pandak. Recent Pakistani and Afghan elections saw similar case surges, and Nigeria is not likely to be any different this time around, especially since the two contenders, incumbent Goodluck Jonathan, and former general Muhammadu Buhari, are neck and neck according to a recent poll. These elections “have the potential to be much more disruptive given the political divisions in the country,” says Pandak.

There is also the uncertainty of how the newly elected government will or will not prioritize polio eradication. Funsho notes that in the past, Nigeria’s newly elected officials at the state and government levels were reluctant to fund immunization. As a result, coverage and quality of vaccination services declined. “It takes a strong effort to educate the new political leaders on the value of supporting polio eradication and making it a national priority,” says Pandak.

A surge of cases now would be a serious setback. Nigeria had only six cases last year, down from 53 in 2013. The rapid decline is a serious achievement, considering that in 2003 vaccinations all but stopped in the north of the country when religious leaders declared that the vaccines were part of a plot to sterilize Muslim girls. By the end of the year, 447 children in Africa had been paralyzed by the Nigerian strain of the virus. Within two years it had spread to across 16 countries, reaching as far away as Indonesia.

This year, Funsho is determined to keep Nigeria’s number at zero this year, setting up what he calls a “war room” for polio eradication. He knows that all it takes for those efforts to be undone is an interruption of regular vaccinations and a decline in vigilance. If he succeeds, the world will be one country closer to totally eradicating the disease. 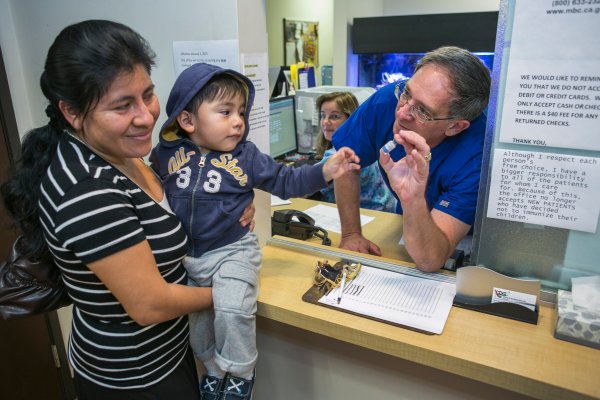