American Sniper and Our Problem With Military Mistakes

Recent controversy over Clint Eastwood’s film American Sniper echoes the aftermath of the Vietnam War. Once again, observers on both the right and the left suggest that one’s attitude towards our soldiers must mirror our attitude towards the war in which they fought, and vice versa. Actually Eastwood managed to walk a very fine line in his film in an effort to avoid such controversy. The film’s hero, Chris Kyle, does at least once speak of having to kill terrorists in Iraq so as not to face them in the United States, but this is tossed off too quickly, it seemed to me, to take very seriously. Eastwood also seems to have sanitized Chris Kyle slightly as well, not with respect to what he did in Iraq, but by omitting some of the boasting he did about killing people within the United States which no one has been able to confirm. Bradley Cooper’s Kyle is evidently designed to stand for all our soldiers. For me the film raises the issue that has caused my own generation so much trouble for five decades: how to separate a mistaken war from the dilemmas of the men and women who have to fight it.

The month to come, as I noted when considering the movie Selma, is the 50th anniversary not only of the Selma March, but of the beginning of the American combat role in the Vietnam War. In fact, it was on this day 50 years ago—Feb. 9, 1965—that a U.S. Air defense battalion was sent to Vietnam. Today’s Americans must be reminded of the enormity of the scale of that effort. Our commitment to Iraq never reached 200,000 men; the commitment to Vietnam reached half a million by early 1968 and stayed there for two years. A draft filled the ranks of our huge Army, either by conscripting men or inducing others, like myself, to enlist either for active duty, or in the Navy or Air Force, or in the reserves.

When it became clear in 1968-9 that ever-increasing casualties were not bringing us closer to victory, the Boom generation largely turned against it, including many of those drawn into the Army. Feeling against the military became very strong, although there was much less resentment of the soldiers themselves than is often misremembered today. President Nixon introduced a draft lottery in the fall of 1969 and began significantly to reduce our forces in South Vietnam in 1970. In 1973, he brought the draft to an end. Not only did the Vietnam experience end the draft, but it kept the United States out of any similar wars for the last 15 years of the Cold War, mainly because the military knew that another such catastrophe could mean the end of the military as they had known it.

MORE Why The Americans Still Resonates Decades After the Cold War

More recent wars have used different strategies. When George H. W. Bush decided to expel Saddam Hussein from Kuwait in 1990, Colin Powell, then Chairman of the Joint Chiefs of Staff, insisted on an overwhelming force, including many units from the reserves and National Guard, which had largely stayed out of Vietnam. That was quick and successful. When George W. Bush went into Iraq in 2003 with a much larger objective than had been the goal during the Gulf War, Donald Rumsfeld insisted that the military try to achieve it without about half the forces, and far fewer allied troops, than Bush Sr. had used to liberate Kuwait. Until 2007, Rumsfeld insisted, in effect, that he had been right, and the military focused upon getting out of Iraq as soon as possible. But the situation was obviously deteriorating, and General Petraeus and the surge managed to stabilize it. President Obama came into office promising to end American participation in the conflict—which is what the Iraqi government wanted as well. In 2010, he did so.

But there were also similarities between Vietnam and the occupation of Iraq. In Vietnam, the South Vietnamese government could remain in power in Saigon as long as American troops remained in the country and American air power was available against North Vietnamese offensives, but Americans could not secure the allegiance of the South Vietnamese people for that government. The problem in Iraq was remarkably similar. Petraeus proved that a mixture of force and blandishments could bring the Sunni areas of Iraq under control, but their future depended on their relations with the new Shi’ite led government. Nuri Al-Maliki, whom the US hand-picked and stuck with until he faced complete disaster just a few months ago, refused to give the Sunnis any real autonomy, and after his government tried to crush their resistance, they were easily won over by ISIS, a direct descendant of Al-Queda in Iraq. Now American air power has been brought back to contain further ISIS advances, but it cannot create a political alternative.

That is the broader context within which Chris Kyle spent several tours in Iraq. As a veteran and a military historian myself, I am rather surprised by the opinion that there is something dishonorable about being a sniper.

The point of battle is to kill the enemy before he kills you, and concealing yourself and firing from a distance is an excellent way to do that. A sniper rifle is a much more discriminating weapon than an artillery shell or an airborne bomb. American Sniper did make the Iraq war look somewhat more traditional than it was. A viewer would never guess that Improvised Explosive Devices were the biggest threat to American troops, and I would be very surprised if an American unit actually had to face the kind of assault that is the climax of the film. But the movie is a fairly realistic portrait of warfare, and it highlights the particular insanity of warfare in the digital age, complete with cell-phone calls from loved ones at home in the midst of battle. It is also in large part about PTSD, a big part of every war, and especially of this one. The American people do have to face what is involved for our soldiers in fighting this kind of war.

Yet it was extremely difficult to come away from the film feeling that Kyle and his fellow soldiers had accomplished anything meaningful. Yes, they killed Iraqis and foreign fighters who were trying to kill them—but only because the US government had decided to send them into Iraq. In an interesting omission, the film never shows American troops cooperating with friendly Iraqi forces. We now know, although not from the film, that the government we set up failed to pacify the Sunni population, and that the civil war our invasion unleashed in Iraq has become just one episode in a regional Shi’ite-Sunni struggle that threatens to become a new Thirty Years’ War. And we know that however many bad guys Kyle managed to kill, the supply of them still seems to be endless.

In every war, men (and now women) fight for many reasons, more or less effectively and more or less heroically. The experience, as so much literature has shown through the ages, brings out the best and the worst of humanity. But in the modern age at least, meaningful war requires meaningful and achievable objectives. Those were lacking in both Vietnam and Iraq. And that, not the portrayal of a single soldier in a film, is what we must focus upon—all the more so since the war in the Middle East still continues.

Read next: The True Heroism of American Sniper 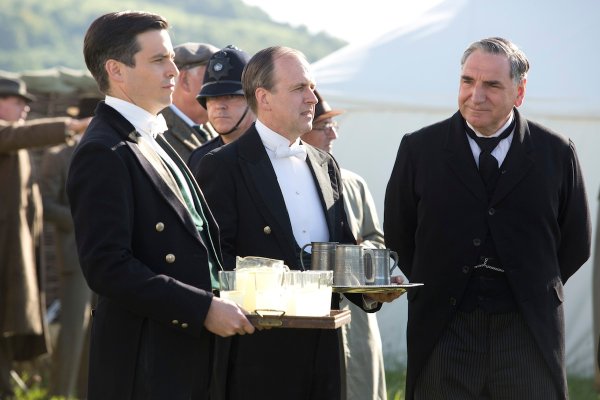 The Historical Truth Behind Thomas' Tragic Revelation on Downton Abbey
Next Up: Editor's Pick