Fresh Off the Boat Star: I Don't Need to Represent Every Asian Mom Ever

ABC’s new sitcom Fresh Off the Boat — the first Asian-American family sitcom in 20 years — is a loose adaptation of the memoir by restaurateur Eddie Huang, who’s profiled in the new issue of TIME. But while the TV show may draw from Huang’s life story, its real star is actress Constance Wu, who plays Huang’s mother, Jessica — and nearly steals the show with her deft comic delivery, according to TIME television critic James Poniewozik.

TIME spoke to Wu about accents, avoiding stereotypes and the importance of Asian-American visibility on television.

TIME: Given how historic the show is, how do you make sure that Jessica is portrayed responsibly and doesn’t become a stereotype?

Constance Wu: Stereotypes are only dangerous when they are used as the butt of the joke, and our writers have taken great care to never write a single joke that is based upon a stereotype. The fact that this is the first show in 20 years that has Asian leads— carrying a story instead of supporting a white person’s story — takes away that burden of stereotypes. What makes a stereotype harmful is when it’s a one-dimensional person.

I think the reason people have been quick to throw the stereotype criticism on us is because there will always be people who are laughing at the wrong thing. Some people are like, “Oh, stereotypical accent!” An accent is an accent. If there were jokes written about the accent, then that would certainly be harmful. But there aren’t jokes written about it. It’s not even talked about. It’s just a fact of life: immigrants have accents. Making the choice to have that is a way of not watering down the character and making it politically correct. It’s choosing authenticity over safety, and I think that’s bold. The people who are going to laugh at the alleged stereotypes are the same people who are going to laugh at their Chinese waiter in the restaurant next door for very coarse, uneducated reasons.

We’re not writing the show to placate the idiots. So to anybody who accuses us of utilizing stereotypes, I would challenge them to point them out when they’re used as humor tools, because they aren’t. And I would challenge people to see if those alleged “stereotypes” are really there, or if they’re just the truth of the actual Jessica Huang, who is a real living and breathing woman in Orlando.

Did you not want to do an accent originally?

No, that was Randall [Park, who plays Huang’s father]. Randall actually wrote an article in which he was like, “If it were up to me, I’d never have to do an accent.” Not only am I okay with doing an accent, I actually think, as an actor, character work is one of the most fun parts. It’s my privilege to be able to play somebody not myself. I’m an actor who creates characters based in voice, movement, emotional quality, speech.

Fresh Off the Boat Has the Makings of an American Original

Eddie Huang on Why Fresh Off the Boat Uses Racial Slurs

And you worked with accent coaches, right? I know Eddie has taken issue with the accents and the ways they don’t resemble those of his parents.

We had two different dialect coaches. I break my accent work down like a drama student does, in a phonetic and rhythmic way. It’s very apparent that Randall and I are attempting to do the same accent, but we’re doing it differently — like if I tried to do a New York accent and you tried to do a New York accent. There’s no such thing as like carbon-copy accents. And I hear that, that he doesn’t hear his mother’s accent the way I heard it. Nothing’s perfect on its first try. I can see why that’s annoying to him, but it was the network’s effort to at least try to make it as authentic as possible. Maybe he doesn’t think it helped, or maybe he thinks it hurt, but the awareness and the concern to get it right was there.

One of my favorite scenes is when Jessica’s neighbors try and explain the rules of the Daytona 500 to her. The joke isn’t that she doesn’t understand because she’s an immigrant — it’s that the familiar things we take for granted aren’t any “stranger” than the things that strike us as foreign.

Totally. I don’t think her foreignness is ever the butt of the joke. She’s aware of her difference, yet she doesn’t think that’s any reason for her to not have a voice. It doesn’t elicit shame in her. She doesn’t become a shrinking violet. And instead of that being something that Asians should be embarrassed of, I think that’s something that we should be proud of — the types of characters who know they don’t speak perfect English, who know they have different customs, who don’t think that that’s any reason for them to not have a voice.

That’s what makes Eddie special: he’s not a placater. He doesn’t always say things that are smooth and easygoing. In fact, he rarely does. But he’s not afraid to say them, and he’s actually acutely aware of the fact that that is what makes him special. I think he gets a lot of that from his mom. She’s not afraid to have her voice. She even said to me at dinner, “My sons always told me that I’m too loud and I need to not be so loud. I told them they just have to get used to it because that’s who I am!” That’s something to be admired.

How much time did you spend with her?

I spent a weekend with her and the whole family, including the other kids, in Orlando. Both [of Eddie’s parents] were nice enough to videotape themselves speaking all of our lines. I phonetically studied it ad nauseum, little mannerisms she had. There was one line in the script that she did not like. She kind of made this stinky face after she said it, and you could tell her opinion of that line. The little mannerisms like that were real gems for me to help build my character. And that line actually did not end up making it into the cut. It was a line about the next door neighbor and her very tight pants, so it wasn’t like an Asian line. It was just commentary on fashion, but she didn’t like it.

What would you tell someone who doesn’t understand why the kind of visibility Fresh Off the Boat offers matters?

I wouldn’t say that just visibility is important. I would say visibility as the stars of a show is important. That says that our stories matter. We’re not here to do the taxes of the white person, or to be the chipper best friend to the white person. It’s important to see Asians in those leading roles because it changes what I’m calling the anglo-heteronormative status of TV. [Imagine] that a producer says, “Guy and girl meet-cute at an ice skating rink. They fall in love, but then she has to move away.” If you say that to anyone, including an Asian person, you picture a white person because that’s what’s become normative to us. If it’s “Asian-American meet in a Chinese restaurant in Chinatown,” that’s the only time you picture it. We need to have a picture of Asian Americans. We have a unique experience that has myriad opportunities for storytelling, if other people are willing to tell those stories.

Could you talk about the show’s balance of relatability and specificity?

Eddie’s definitely trying to push the show to be more specific. I do think, because it’s network TV and they want to appeal to a broad audience and get their corporate sponsors and all that, they’re seeking a more universal, everybody-is-pleased type of stance. That’s the genesis of the conflict, I think, between Eddie and the network process. I really want to make sure that people understand that I do not stigmatize conflict. I think a lot of people read his [New York magazine] article and were like, “Ooh, drama on the set!” That should not be seen as bad, or as an indicator of anything remiss. I think it’s actually an indicator of strength and of commitment to excellence.

We shouldn’t be a voice for all Asians. We are such a varied group that there’s no one show that can be like, “This is what Asian America looks like!” But we’re given that burden because we’re so rarely represented. If you see Tina Fey on television, you’re not like, “All white women are like Tina Fey.” Yet people are like, “Oh, Jessica Huang’s not like my mother, but this show is supposed to be about Asians, so shouldn’t she be like my mother?”

I understand the burden, because the history of our representation on TV is very sparse. But we’d be doing a disservice to the people who are worried about that by watering it down instead of trying to be specific. Specificity is what makes good storytelling, and good storytelling is what makes money, and making money is then what encourages new producers to invest in different stories about Asians.

In the more immediate, “How is my next-door neighbor going to see me after this show?” I get the anxiety. But we’re trying to be a little more far-sighted in this mission. We were featured at the SAG Awards in a little diversity clip, which is great, but the fact that in order to feature Asian leads in a montage about diversity, they have to show a clip from a show that hadn’t even aired yet? That just goes to show we don’t have Asian leads! We just don’t. Hopefully this will get the ball rolling in terms of other people telling other stories that are completely different and totally unique.

Read next: Review: Fresh Off the Boat Has the Makings of an American Original 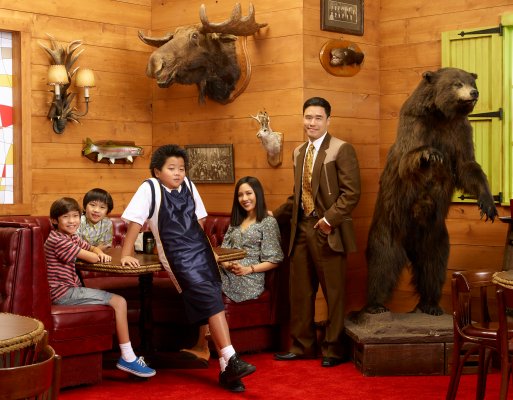