Remember when people seriously talked about their eBay addictions? You might not, because you’d have to go back a dozen years or more. And anyway, it was really more of a compulsion, the way mobile games or chat apps have more recently become. Still, if you look you can still find multiple confessions of self-described eBay addicts.

“Hard to believe it’s only been six months since I met my great love,” began one addict’s confession in the heady days of 1999. “I refer, of course, to eBay.” Of course. The site’s manic youthfulness was captured back then in a TV ad where a pudgy Bezos-ish man danced and sang how “I did it eBay!”. Quirky, yes, but eBayers got it. eBay was the “it” company, the rare dot-com that saw its stock surge after the tech bust, fueled in large part by the compulsions of its buyers.

No fad lasts, though, and eBay had to weather a rough transition as our online addictions moved to MySpace, then to Facebook, then to Angry Birds and beyond. Its stock peaked at $59.21 a share in late 2004 before entering into a tailspin after it became clear the broad enthusiasm for online auctions was fading. Within five years, the share price had fallen below $10 a share.

In the rare turnaround for an Internet company, eBay came back–reaching as high as $59.70 a year ago–because of two key factors. The first was PayPal, which eBay bought for $1.5 billion in 2002. The second was CEO John Donahoe, who realigned the company at great effort to not only keep PayPal ascendant but also to revive eBay’s original marketplace.

Today, the stock is still performing well, trading around $55 a share. But don’t read too much optimism into that. Shareholders aren’t bailing because the company has worked so hard to please them. Stock buybacks trimmed eBay’s share count by 5% in 2014–enough, its CFO reckons, to add 8 cents a share to the bottom line this year. And eBay is ready with another $3 billion to spend on repurchasing more shares if necessary. Meanwhile, 2,400 workers are being laid off this week.

Beneath such investor-pleasing maneuvers, there remains a renewed and growing conviction that the decline of eBay’s core operations is starting all over again. It’s not at all uncommon for Internet companies to see a meteoric rise and fall (it’s practically become the rule), but eBay seems to be charting a different narrative: The rise and fall. And rise. And fall.

eBay’s decline this time is happening differently. The company is literally splintering apart in the form of corporate spinoffs. Last September, under pressure from boardroom bully Carl Icahn, eBay unveiled a plan to break off PayPal into a separate company later this year. Last week, after the company reported earnings, eBay announced another surprise spinoff: its Enterprise business, which will either launch an IPO or be partially sold to another company.

PayPal is also thriving, growing steadily at around 19% for the past couple of years. And so the weak part of the post-spinoff trio will clearly be eBay itself, the lean marketplace rump that will be left once the choicer meat is sliced away. Its revenue grew by 6% in all of 2014 and only 1% in the fourth quarter–the big quarter for retailers because it includes the holiday shopping season.

Excluding volatile foreign exchange rates, eBay’s marketplace rose 5% last quarter, but even that is disappointing considering the performance of other online retailers. ChannelAdvisor, which has long tracked sales on e-commerce sites, estimated that eBay’s sales during the holiday season–basically, November and December–rose 7.3%, well below the mean growth of 16% for all sites it tracks. Amazon’s grew 27% in the period. But what ChannelAdvisor calls “third party” retailers, everything from BestBuy to NewEgg to Tesco to Rakuten, rose 34%.

Parsing e-commerce sales is still a matter of guessing at a fragmented market, but here’s the bottom line for eBay: It’s not just that auctions aren’t popular now, it’s more that eBay’s transition to regular e-commerce has hit a wall. Its Web site redesign is already dated. It’s struggling to stay high in Google searches. Many of its most trusted sellers can also be found on other sites, like Amazon. eBay is just one of many shingles they hang out these days.

Which is too bad for online shoppers because often the prices and shipping charges on eBay make for cheaper than Amazon and elsewhere. But shoppers are often too harried to compare prices these days. Sites like Etsy and Alibaba seem to have more momentum, while Pinterest and Zulilly are where many go to impulse buy online. Meanwhile, Best Buy and others are doing better at reaching out to their customers online.

The result is that there’s little momentum left for eBay, once the champion of e-commerce momentum. No one dances around and sings “I did it eBay!” anymore. Even Donahoe & Co. are throwing in the towel to a certain extent. The site remains a very nice place to buy—rather useful if you bother to figure it out—but at the end of the day just one of many online marketplaces. The addiction that made eBay a star has left eBay behind.

So, it seems, have PayPal as well as the Enterprise business that Donahoe built. That’s okay with shareholders because they now have a chance to invest in PayPal and the non-consumer ecommerce business, while selling their shares in the good old eBay that once ruled our online shopping impulses. The legendary auction site will soon become the auctioned goods, only with fewer and fewer bids as the clock ticks away. 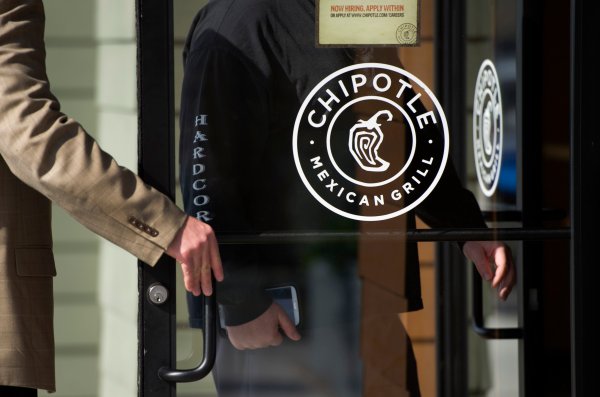 Why Chipotle's CEO Is So Obsessed With Talking About Pigs
Next Up: Editor's Pick