Former Florida Governor Jeb Bush offered a glimpse Wednesday of the economic message at the core of his likely presidential bid, using the maiden policy speech of his unofficial 2016 campaign to sketch out how conservative policies can restore the prospect of upward mobility for the struggling American middle class.

“Far too many Americans live on the edge of economic ruin. And many more feel like they’re stuck in place, working longer and harder, even as they’re losing ground,” Bush said in Detroit. “Tens of millions of Americans no longer see a clear path to rise above their challenges. The opportunity gap is the defining issue of our time.

“I will offer a new vision. A plan of action that is different than what we have been hearing in Washington, D.C.,” Bush said. “It is a vision rooted in conservative principles and tethered to our shared belief in opportunity and the unknown possibilities of a nation given the freedom to act, to create, to dream and to rise.”

The address marks a new phase of campaign preparations for Bush, an early front-runner for the Republican nomination. Since announcing in mid-December that he would explore the possibility of a run for the White House, Bush has focused aggressively on locking up institutional support among the party’s elite donors and operatives. And while he has enjoyed swift success courting party bigwigs in private, the breadth of his public appeal is a question mark eight years after he left the governor’s mansion in Tallahassee.

Unlike the rest of the still gelling Republican field, Bush has eschewed candidate cattle calls in early primary states like Iowa. So his appearance here Wednesday, before more than 500 people at the Detroit Economic Club, was the first major showcase of the themes that would underpin his campaign. Standing at the front of a full ballroom nestled against the Detroit River, Bush laid out the broad strokes of a policy agenda that he argued would promote economic growth, lift the middle class and trim the size of the federal government while shifting power to the states.

“In the coming months, I intend to detail how we can get there,” he said, “with a mix of smart policies and reforms to tap our resources and capacity to innovate, whether in energy, manufacturing, health care or technology.”

Income inequality has become one of the 2016 race’s signature issues for both parties, and several of Bush’s competitors have made the theme a pillar of their pitches to voters. But the decision to road-test the message of economic mobility in the Democratic stronghold of Detroit was a signal that Bush intends to compete in the urban areas the GOP has largely ceded in recent decades as a lost cause. The Motor City has been battered in recent years by depopulation, bad governance and the cratering auto industry. “Look around this city,” Bush said. “In its history is a warning to all of us.”

“I know some in the media think conservatives don’t care about the cities. But they’re wrong,” Bush said. “We believe that every American in every community has a right to pursue happiness. They have a right to rise. So I say let’s go where our ideas can matter most. Where the failures of liberal government policies are the most obvious. Let’s deliver real conservative success.

“And you know what will happen?” he added. “We’ll create a whole lot of new conservatives.”

That word conservative was on his lips a lot during a 22-minute speech and a subsequent question-and-answer session. The label looms large over Bush’s efforts to reintroduce himself to voters as the Republican primary field takes shape. Though he compiled a staunchly conservative record as governor, Bush’s support for immigration reform and the Common Core education standards — both anathema to swaths of the party’s hard-right grassroots — have led conservative critics and many pundits to argue he is too moderate for a party that has drifted right in the years since he left office.

Bush mixed in jabs at liberal mismanagement and took a whack at the”reckless” cronyism of Washington. He also took a series of shots at President Obama, including criticism of his recent proposal to tax 529 college-savings plans. But the optimistic speech — “this is the greatest time to be alive as Americans,” Bush said — was aimed at center-right and swing voters rather than the fervent conservatives who are a fixture of the GOP nominating process.

A senior adviser said Bush would not pander in an attempt to appeal to narrow segments of the base, nor pull punches on issues, like his belief in immigration reform, where his views are controversial within the party. During the question-and-answer session, Bush laid out his thinking on immigration reform in greater detail than most of the rest of his prepared speech, and drew a round of applause.

He made a tentative pledge to rise above the fray when the primary campaign season turns combative. “As the old order has been disrupted, it’s been replaced by a little more of a Wild West process,” he said, adding that he hoped he had the discipline not to “get into the food fights.”

The former governor also offered a preview of his thinking about how his family’s political legacy would figure into the campaign. “My dad is the greatest man alive,” Bush said, “and I love my brother.”

Being the son and brother of Presidents is an “interesting challenge,” Bush said, noting that if he decides to run, “I would have to deal this, and turn this fact into an opportunity, to share who I am, to connect on a human level.” 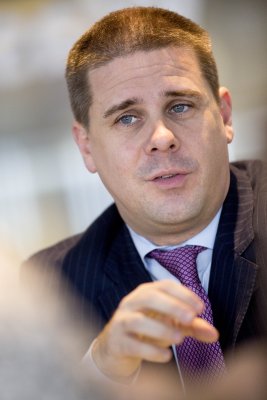