It was March 2001, and I was a 19-year-old focused on winning and being the best I could be, both for me and for the kids who looked up to me. I had spent tens of thousands of hours—most of my ­adolescence—­serving, running, practicing, training day in and day out in pursuit of a dream. And it had started to become a reality. As a black tennis player, I looked different. I sounded different. I dressed differently. I served differently. But when I stepped onto the court, I could compete with anyone.

The tournament in Indian Wells, Calif., held a special place in my heart. I won my first pro match there in 1997, alongside my sister in doubles. I then sat and watched Venus qualify for the singles event and make a magical run all the way to the quarterfinals. It was a giant win not only for her but also for our whole family, and it marked the beginning of a new era that we were unknowingly writing. My first big tournament win also happened there, when I beat Steffi Graf in the ’99 final.

When I arrived at Indian Wells in 2001, I was looking to take another title. I was ready. But however ready I was, nothing could have prepared me for what happened in the final. As I walked out onto the court, the crowd immediately started jeering and booing. In my last match, the semifinals, I was set to play my sister, but Venus had tendinitis and had to pull out. Apparently that angered many fans. Throughout my whole career, integrity has been everything to me. It is also everything and more to Venus. The false allegations that our matches were fixed hurt, cut and ripped into us deeply. The under­current of racism was painful, confusing and unfair. In a game I loved with all my heart, at one of my most cherished tournaments, I suddenly felt unwelcome, alone and afraid.

For all their practice, preparation and confidence, even the best competitors in every sport have a voice of doubt inside them that says they are not good enough. I am lucky that whatever fear I have inside me, my desire to win is always stronger.

When I was booed at Indian Wells—by what seemed like the whole world—my voice of doubt became real. I didn’t understand what was going on in that moment. But worse, I had no desire to even win. It happened very quickly.

This haunted me for a long time. It haunted Venus and our family as well. But most of all, it angered and saddened my father. He dedicated his whole life to prepping us for this incredible journey, and there he had to sit and watch his daughter being taunted, sparking cold memories of his experiences growing up in the South.

Thirteen years and a lifetime in tennis later, things feel different. A few months ago, when Russian official Shamil Tarpischev made racist and sexist remarks about Venus and me, the WTA and USTA immediately condemned him. It reminded me how far the sport has come, and how far I’ve come too.

I have thought about going back to Indian Wells many times over my career. I said a few times that I would never play there again. And believe me, I meant it. I admit it scared me. What if I walked onto the court and the entire crowd booed me? The nightmare would start all over.

It has been difficult for me to forget spending hours crying in the Indian Wells locker room after winning in 2001, driving back to Los Angeles feeling as if I had lost the biggest game ever—not a mere tennis game but a bigger fight for equality. Emotionally it seemed easier to stay away. There are some who say I should never go back. There are others who say I should’ve returned years ago. I understand both perspectives very well and wrestled with them for a long time. I’m just following my heart on this one.

I’m fortunate to be at a point in my career where I have nothing to prove. I’m still as driven as ever, but the ride is a little easier. I play for the love of the game. And it is with that love in mind, and a new understanding of the true meaning of forgiveness, that I will proudly return to Indian Wells in 2015.

I was raised by my mom to love and forgive freely. “When you stand praying, forgive whatever you have against anyone, so that your Father who is in the heavens may also forgive you” (Mark 11:25). I have faith that fans at Indian Wells have grown with the game and know me better than they did in 2001.

Indian Wells was a pivotal moment of my story, and I am a part of the tournament’s story as well. Together we have a chance to write a different ­ending. 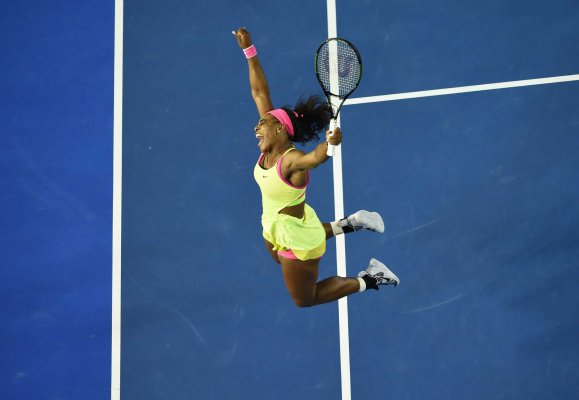