With the deadly attacks on Charlie Hebdo’s office in Paris earlier this month, pundits are again questioning a commonly-cited motive for radicalization. Media leaders are outright dismissing the possible role poverty plays in terrorism. On Hardball, Chris Matthews stated, “The world is filled with hundreds and hundreds of millions of poor people who have no prospects at all, but they don’t go around killing people. India is packed with poor people and they don’t go around killing people. Africa the same. These are killers.” The Wall Street Journal opined, “Wednesday’s attack also demonstrates again that violent Islam isn’t a reaction to poverty or Western policies in the Middle East. It is an ideological challenge to Western civilization and principles, including a free press and religious pluralism.”

Are the commentators right to dismiss poverty as a cause of terrorism? Policymakers, for their part, have shown a consistent tendency to name poverty as a primary motivation for terrorist acts. For example, in remarks made after a meeting with the Vatican’s Secretary of State in 2014, John Kerry declared, “We have a huge common interest in dealing with this issue of poverty, which in many cases is the root cause of terrorism or even the root cause of the disenfranchisement of millions of people on this planet.”

Scholars, however, have often come to opposite conclusions. A 2006 study on terrorism for 96 countries between 1986 and 2002 found no link between its economic measures and terrorism. In 2002, Alan Krueger, a professor of economics and public affairs at Princeton, and Jitka Malecková, an associate professor at the Institute for Middle Eastern and African Studies at Charles University, made the argument in The New Republic against poverty’s role in terrorism with a wide-ranging presentation of evidence including evidence gathered from Hezbollah and Hamas suggesting that upper class and more educated individuals are slightly over-represented in among terrorists because terror groups actively select for those individuals from large populations of potential recruits.’

This wealth of scholarly evidence is certainly daunting for those who argue that poverty is a cause of terrorism. However, before dismissing poverty out of hand, the pundits ought to show restraint and scholars should continue to update and reanalyze the data.

Why should media critics and academics alike avoid a rush to judgment on poverty and terrorism? For one thing, some scholarly literature documents a relationship though not necessarily a causal one—between poverty and some terrorism. A 2011 study (notably disputed by Krueger and Malecková, among others) found a positive relationship between unemployment and right wing extremist crimes committed in Germany. A 1977 study of terrorist profiles which supported the conclusion that terrorists are generally middle or upper class noted that the Provisional Irish Republican Army constituted an exception both in terms of social class and educational attainment. The Basque terrorist group ETA provides another interesting example: Goldie Shabad and Francisco Ramo point out in the edited anthology Terrorism in Context that over time, membership in ETA grew among working class individuals while it declined among the upper classes.

These examples demonstrate a fundamental structural problem in method and approach. By treating terrorism as a single category that can be examined across multiple countries and decades rather than focusing on particular groups or individuals, we overlook patterns that exist in some but not all cases.

Indeed, it is quite likely there are multiple routes into terrorism, some of which might involve poverty and some of which might not. When this data is aggregated, the poverty-related routes become less visible, but that does not mean they don’t exist. Where scholars are often careful to acknowledge this limitation, pundits have sidelined it in grand pronouncements that poverty does not cause terrorism.

Shifting our thinking on methods used to evaluate relationships between terrorism and poverty may well reveal new dimensions other potential explanations for terrorism, such as mental illness. Recent studies have found that while terrorists involved in terrorist groups are not particularly likely to be mentally ill, those who act alone are far more likely than the general population to be mentally ill. One study found 40% of the 98 lone wolves it examined to have identifiable mental health issues compared to only 1.5% of the general population.

One size will never fit all. Searching for single-category, causal explanations for terrorism and dismissing correlated elements like poverty and mental illness as irrelevant is likely to obscure other patterns that could shed light on extremist behavior. Some Americans involved in terrorism have come from affluent backgrounds: Anwar Awlaki, the American cleric who took on a leadership role in Al Qaeda in the Arabian Peninsula, was the son of a major Yemeni political figure and Zachary Chesser, who was sentenced to 25 years in prison for trying to join Al Shabaab and threatening the creators of South Park over their depiction of Mohammed, was born to a well off family in the Virginia suburbs. On the other hand, American Somalis—82 percent of whom live near or below the poverty line according to a 2008 Census Bureau study—are the source of the largest groups travelling to fight with jihadist groups abroad. The New York Times referred to the group of Minnesotans—most of whom were of Somali descent—that travelled to fight for Al Shabaab as “the largest group of American citizens suspected of joining an extremist movement affiliated with Al Qaeda.” Since that report, the same communities have wrestled with a new wave of individuals travelling to fight in Syria.

Community members on the ground contend that the economic situation explains the persistence of jihadist recruitment among Minnesota’s Somali community. Fartun Weli, a founder of a nonprofit helping Somali women, told Voice of America that “Kids are being recruited. Yes, this is a fact. What are we going to do about it? We have to talk about the root causes that make Somali kids vulnerable … we have to make sure there are opportunities created for our community to exit poverty.”

This case calls for more study and disaggregation when looking at the potential role of poverty in causing terrorism. It is also important to consider that the argument that terrorists are often middle class and well educated because terrorist groups are capable of selecting their preferred operatives from a large pool of recruits depends on the context. Some groups, particularly well-developed groups have name recognition and screening mechanisms in place, but newer, less well-known outfits usually do not. Others may simply not be interested in screening their recruits or consider it a priority compared to gaining more manpower or the propaganda edge of a large and diverse fighting force.

Indeed, one of the primary characteristics of ISIS’ use of foreign fighters today is that they are not particularly selective about who they accept into their ranks. As Peter Neumann, the director of the International Centre for the Study of Political Violence put it, “The Islamic State is also less selective than a lot of other groups. If you come from the West, don’t speak Arabic, you’re not a particularly good fighter and don’t have a particular skill, IS will probably still accept you.”

Some groups, for example Al Qaeda in the Arabian Peninsula, have even adopted open source methods publishing bombmaking instructions online to encourage attacks where they have difficulty inserting operatives with close ties to the organization. But in adopting such an open source leaderless strategy they surrender any ability to conduct screening.

None of this is to say that an affirmative case for the role of poverty in causing terrorism is clear. However, it is time for new studies on the subject and a move towards examinations of more specific threat actors using within-case variation and other methods capable of revealing how poverty might have different effects in different contexts. Assuming previous studies still explain the dynamics in the cases we face today could lead to blind spots allowing threats to mature unhindered.

David Sterman is a research associate for New America’s International Security Program and a graduate of Georgetown’s Center for Security Studies. This piece was originally published in New America’s digital magazine, The Weekly Wonk. Sign up to get it delivered to your inbox each Thursday here, and follow @New America on Twitter. 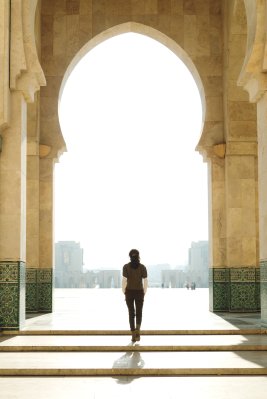 Why Will No One Let the Muslim World Be Secular?
Next Up: Editor's Pick