Christopher Furlong—etty Images
Ideas
By Chris Ferguson
Christopher J. Ferguson is associate professor and department chair of psychology at Stetson University. He has published numerous scientific articles on the topic of video games and mental health and recently served as guest editor for an American Psychological Association’s special journal issue on the topic. Ferguson is also the editor of Violent Crime: Clinical and Social Implications and the author of The Suicide Kings.

Parents of infants face hard choices about how to raise their children, and sometimes misleading information can get in the way of their decisions. Take screen time: readers of the Guardian were recently treated to the claim that allowing toddlers to play with iPads or other small screens could damage their brains. It turned out, however, that the story (since corrected) was not based on an actual research study, but a press release regarding a commentary in the journal Pediatrics. The story was one in a series of claims in recent years that tablet use hurts infants’ development—scary headlines that too often mislead readers about research that is much less clear or consistent than claimed.

Both journalists and scholars are responsible for needlessly scaring parents. For instance, the American Academy of Pediatrics (AAP) has long called for complete avoidance of screen time in infancy. Yet a number of scholars and commenters have criticized the AAP for being both unrealistic and ignoring data that doesn’t fit their scarier message. One of the top experts in this area, Deborah Linebarger has said that the AAP should present all data on screen time rather than ignoring data that suggest positive benefits of media while sensationalizing flawed studies that find negative relations. So what does the research really say on screen time for infants?

Well, it’s complicated. First, claims that exposure to screens (including television) is associated with reduced cognitive development in childhood are controversial. In one of my own recent studies with coauthor M. Brent Donnellan, we found that total abstinence, that is to say families following the AAP’s recommendations, was actually associated with lower cognitive development, not higher. But this doesn’t mean that anything goes—no one is suggesting that we sit baby down for a Terminator marathon.

The non-profit group Zero to Three recently released screen time recommendations for infants. As they note, it really is not so simple as to say that screens are or aren’t good for infants. Nor is abstinence the answer. It’s more about using screens in a quality way, as when caregivers engage with infants while they watch and explain what they are seeing. Screens such as iPads or smartphones can actually be used in ways that promote babies’ cognitive and social development. But as they write, moderation is key: “the need for limits is still important because research clearly shows that it is active exploration of the real, 3-D world with loving, trusting caregivers that is most critical for healthy early development.”

In another recent study, presented by Deborah Linebarger at the American Psychological Association conference in 2014, researchers found that parent-toddler interactions around media were most crucial for toddlers’ language development and that media that shows real characters in real situations is associated with better language development. Too often newspaper headlines and the AAP present media and parenting as a kind of zero-sum game. But media can be intelligently incorporated into smart parenting.

So, given that the data is often complex and contradictory and even scholars debate these issues, what should parents do? Is it ok to let the little ones have a bit of screen time? Probably, so long as it’s not replacing interactions with parents and it’s using media that is educational or geared toward children and shows real characters in real situations. Don’t think of media as an either/or but something you can use with children and talk to them about. Sure, if you’re letting your infant watch CNN alone for hours on end, you’ve probably got media wrong. But total abstinence for toddlers isn’t necessary. Pressuring parents with total media abstinence, particularly with nonsense claims of damaged brains isn’t good science. It’s just frightening and shaming parents. 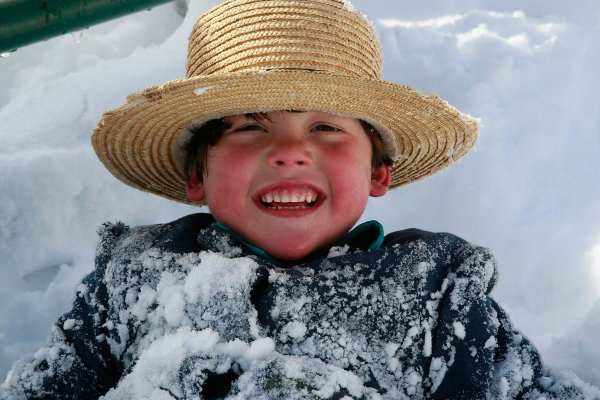 Why Amish Kids Are Happier than Yours
Next Up: Editor's Pick