9 Ways Advertisers Think We Could Convince Parents to Vaccinate

For decades, science has proven that vaccines work, but they still have a messaging problem among some parents. There are now 102 cases of measles confirmed in 14 states, many of them among people who are unvaccinated.

We asked advertising and marketing executives to share how they would choose to market vaccines, if the struggling medicines were their client.

1. Market them to kids. There’s a reason Saturday morning ads are all about food, toys and games. Getting kids to ask their parents for a product—a strategy called “pester power”—works. And it could work for vaccines too, says Bill Wright, global executive creative director for McCann Worldgroup (the firm behind ads for Verizon FiOS, General Mills and Mucinex).

Wright suggests an ad that says to kids: “Get vaccinated and you won’t get measles. Measles are horrible and hurt. And by the way, when you get a shot it’s customary to eat ice cream and get a small toy.”

2. Make it funny. Imagine an ad with a celebrity cage fight: on one side, anti-vaxxer Jenny McCarthy, and on the other, pro-vaccine Amanda Peet. That’s the advertising fantasy of Robin Fitzgerald, VP/creative director at CP+B LA, the firm behind ads for Netflix and Burger King. “We have it at Caesar’s Palace and Hillary Clinton and Bill O’Reilly are in front row seats cheering on Peet,” she says. “Just so people really feel the hyperbolic ridiculousness and the level the debate has gone to.”

Humor is the way to go, agreed folks at The Martin Agency, the company behind the GEICO ads. “A campaign using humor makes the situation much more approachable,” says CCO Joe Alexander. Funny ads appeal to millennials, Alexander says, which is an age demographic more likely to think parents should have a choice when it comes to vaccinating their kids.

One of the most successful campaigns to try this approach was “Dumb Ways to Die,” by Metro Trains in Melbourne, Australia. In the video (below), animated characters die in “dumb” ways like lighting themselves on fire and poking a grizzly bear with a stick. The goal was to promote train safety, and the campaign went viral. Alexander says the same approach could be used for measles.

3. Try sarcasm. Imagine a somber ad thanking anti-vaxxers for the measles outbreak. Wright says a message like this could work: “We would like to thank you for bringing back archaic diseases like measles, mumps and whooping cough. Yay, it’s like 1800 all over again, way to go!”

4. Get personal. We need stories that combat the narrative from loud voices like Jenny McCarthy, says Elizabeth Cleveland, vice president/planning director of The Martin Agency. But instead of hearing from doctors, she says, moms with kids who contracted measles should have the voice. Cleveland asked her own pediatrician for some stories, who supplied the perfect one-liner from a mom: “If my son can’t bring a peanut butter sandwich to school, then you can’t bring your unvaccinated child.”

5. Talk about measles, not vaccines. Go after the disease itself, rather than the vaccine debate, says Pete Harvey, creative director/partner at advertising agency barrettSF. (Harvey worked previously on highly successful “Truth” campaign against tobacco.) His idea? An ad with one simple message: “The measles are back.”

“That way, there is a common enemy that isn’t the person you are trying to convince,” says Harvey. “Everyone will say we have to fight this—no parent would say no to that.”

6. Launch a social media campaign. Find a way for everyone who gets vaccines to raise their hand and say so. Wright suggests creating a shareable graphic on Twitter and Facebook that says: “I got my kids vaccinated, did you?”

The idea is similar to the Human Rights Campaign’s viral campaign that got millions to change their profile pictures to a red equal sign for same sex marriage (see below). “It needs to be a coordinated effort, not a series of biting tweets,” says Patrick Godfrey, managing partner and president of the firm Godfrey Q. “Move [the anti-vaxxers] into a corner.”

7. Add a little fear. Create a film chronicling the measles outbreak, suggests Fitzgerald, who notes that she’d recruit Danny Boyle, the director behind the post-apocalyptic film 28 Days Later. “We open in Disneyland, we see someone cough, and it takes off from there,” she says. “We market the movie by having big groups of red dotted men, women and children appear flash-mob style in public places dancing to Desmond Dekker’s You Can Get it If You Really Want.”

8. Make it a game. Create an app calculating your risk of getting measles, similar to the app “Am I Going Down?” which determines the chance that your plane is going to crash, suggests Tiffany Coletti Titolo, president of cummins & partners, the firm behind Jeep ads. Parents would input demographic data and get stats about the likelihood of getting measles, plus the unlikelihood that someone has an adverse event from the vaccine. For example, you’re 100 times more likely to be struck by lightning than to have a serious allergic reaction to the vaccine.

9. Whatever you do, don’t preach. The Internet has chastised anti-vaxxers, but simply yelling at them isn’t going to change a parent’s mind. In highly emotional debates, some people get very stuck in their ways—but it’s not impossible to change their minds, says Wright, who also worked on the “Truth” campaign against tobacco. “Before, anti-tobacco was very preachy—we just wanted to present the facts,” he says. “We found that the fact that resonated the most [with teens] was that Big Tobacco was just another preachy adult telling them what to do.”

“It’s all about parents wanting to feel like they have a say in the matter,” Harvey agrees. “If you say they shouldn’t, they dig their heels further.” 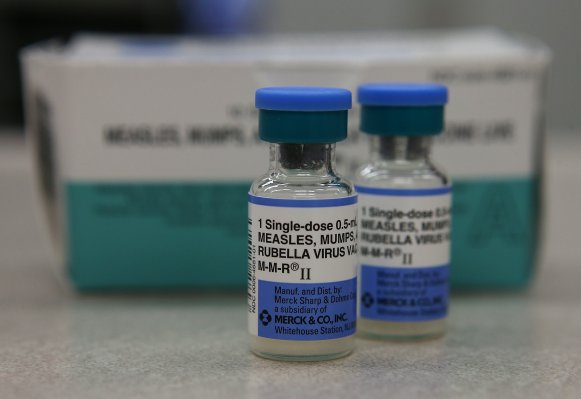 5 Chicago Babies Have Measles
Next Up: Editor's Pick