In a tweet, Clinton dismissed those who believe that vaccinations are linked to autism, hours after New Jersey Governor Chris Christie and Kentucky Senator Rand Paul suggested that parents be granted some element of control over what inoculations their children receive. Her public comments follow a period of relative quiet from Clintonland as she gears up for an all-but-certain presidential campaign in 2016.

On Monday morning, Christie said parents should have “some measure of choice” over how their children are vaccinated, when asked about an outbreak of measles in the U.S. His office later backtracked, saying the dad of four believes “with a disease like measles there is no question kids should be vaccinated. At the same time different states require different degrees of vaccination, which is why he was calling for balance in which ones government should mandate.”

In a contentious interview with CNBC on Monday afternoon, Paul said he didn’t see why his position that most vaccines should be voluntary would be controversial. “For most of our history, they have been voluntary. So I don’t think I’m arguing for anything out of the ordinary,” he said.

“I have heard of many tragic cases of walking, talking normal children who wound up with profound mental disorders after vaccines,” Paul added, repeating claims that have extremely dubious scientific grounds.

Clinton’s statement follows something of a change of heart from 2008 when she filled out a survey from a group known as the Autism Action Network, saying, “I am committed to make investments to find the causes of autism, including possible environmental causes like vaccines.” 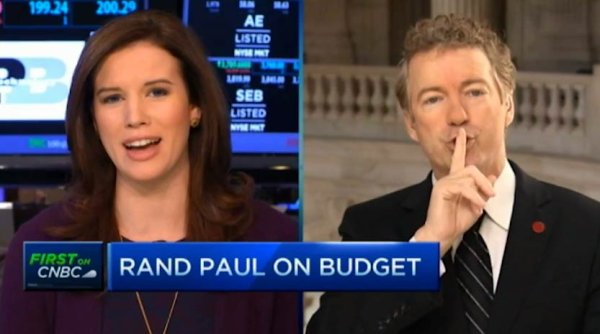 Watch Rand Paul Shush a Reporter During an Interview
Next Up: Editor's Pick