“George Osborne chats to random clubber on the street after a night out. Oh no wait, it’s the Greek finance minister.” It was one of the cleverer tweets to issue from the visit to London on Monday of Yanis Varoufakis, the man who was last week appointed to one of the toughest jobs in the world. In the accompanying photograph, the two men pose in front of 11 Downing Street — Osborne in a dark suit and tie, his Greek counterpart in a leather jacket over an untucked bright blue shirt, trousers and boots.

As Minister of Finance in Greece’s radical new coalition, Varoufakis was bound to attract attention. After all, the new government, made up of the of the hard-left Syriza party, which nearly won an outright majority in the January 25th election, and the right-wing nationalist Independent Greeks, has made it clear it has no interest in completing the stabilization program overseen by the troika (the European Commission, the European Central Bank and the IMF). Instead, it is keen to renegotiate the conditions of its bailout, in the direction of greater debt relief, less austerity and a repeal of what it deems destructive neoliberal reforms. Germany, the main author of the spirit of that programme, is in no mood for such a negotiation especially if it means losses for German taxpayers.

So Varoufakis, who is touring European capitals this week to drum up support for Greece’s quest for a new deal, has his work cut out for him. But despite the size of the challenge and his lack of policy or executive experience, not to mention his infelicitous debut alongside Eurogroup head and Dutch Finance minister Jeroen Dijsselbloem in Athens last Friday, the 53-year old economist seems undaunted.

He has also shown himself unwilling to alter his idiosyncratic ways to conform to what the world has come to expect of finance ministers. His casual style, as much as the substance of his proposals, has led to an explosion of media interest in his person, which he seems to revel in. He attracts passionate support and intense dislike in equal measure. The cause can be trifling — the fact that he deviates from traditional spelling to spell his first name with one “n”, for example — or serious, like when he was fired from his job on Australian public radio for what was deemed excessively strident criticism of Israel.

The man in charge of ending Greece’s Depression has spent most of his academic life in Australia (he holds dual Hellenic-Australian citizenship) and the UK, before returning to Greece to teach at the University of Athens in 2000. During the last few years, he became widely known in Greece and acquired a measure of international fame for his analyses of the causes of the euro crisis, in books and TV appearances.

In 2013, he took up a teaching post at the University of Texas in Austin. A year earlier, he had become the in-house economist of the Valve corporation, a Seattle-based video game development company. Yet in this period, as Greece kept struggling and the star of Alexis Tsipras, leader of Syriza, started rising, Varoufakis remained deeply involved in the policy discussion about the future of the Eurozone. His “Modest Proposal” for the solution of the euro crisis, co-written with professor and former MP of the U.K. Labour Party Stuart Holland (and also, in its later incarnation, with James K. Galbraith), argues that it consists of four “sub-crises” – of the banking sector, public debt, under-investment and social dislocation. It is a much more nuanced interpretation of what has gone wrong than the German-led account, which heaps all the blame on uncompetitive, spendthrift debtor nations.

His emphasis on the role of banks and on the self-defeating nature of harsh austerity, the lynchpin of the bailout programmes imposed on Greece by its official creditors, made him Tsipras’ favourite economist. There was talk of him being a candidate with Syriza in the European elections last May. It didn’t happen then, but when snap elections were called on December 29, he took the plunge, and emerged triumphant: he got 135,638 votes, by far the most out of any candidate in the country. The way was now open for the Finance Ministry, and his biggest audience yet.

This is where the tricky part begins, of course. No longer a commentator — a part he has difficulty letting go of —, Varoufakis must now craft the mother of all compromises. He must assuage Europe’s fears that the new government plans to unilaterally go back to the bad old ways of the pre-crisis period, while staying true to the democratic mandate to end austerity. His knowledge of game theory should stand him in good stead in the coming negotiation. Above all, he should recall that in the event of a non-cooperative outcome, the losses for his side will be much greater, and that, therefore, he has to avoid it at all costs.

Yannis Palaiologos is the author of “The Thirteenth Labour of Hercules”

Read next: France Offers Support for Greece Amid Bailout Tensions 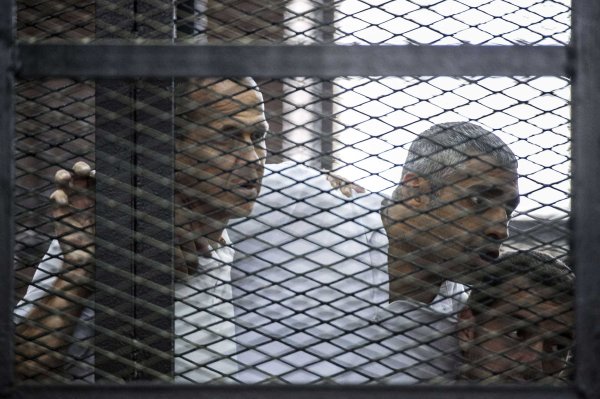 Egypt Frees Journalist But Leaves Many More Jailed
Next Up: Editor's Pick