Review: The Surge Is the Most Powerful Fitbit Ever

On first look, it’s easy to mistake Fitbit’s new feature-packed Fitness Surge for a smartwatch. But don’t be fooled. Fitbit calls it a “Super Watch,” and for good distinction: This is a tool for performance-obsessed athletes, not an Apple Watch competitor.

The new $249 Fitbit Surge is the company’s most powerful fitness tracker to date. It packs in GPS positioning, constant heart rate monitoring, distance tracking and more into a 1.34 inch-wide body. The Surge’s rectangular monochrome LCD display, unique among Fitbit’s offerings, is touch enabled and shows you text notifications, control your phone’s music or start tracking a specific workout, like cycling or lifting weights. As with other Fitbit devices, the Surge syncs to a mobile and desktop app that tracks your health data over the long-term.

As a high-end fitness tracker, the Surge excels. Upgrading from the lower-end Fitbit Flex, I found the Surge’s heart rate monitoring especially useful. Seeing that my resting heart rate is a little higher than it should be motivated me to focus more on my cardio, for example, while checking that number during workouts lets me better tell how hard I was really pushing myself. The Surge’s text and call notifications were also particularly handy at the gym. No more interrupting my workout and fiddling around for my phone just to see that vibration was a text I could’ve answered later. These functions also use Bluetooth 4.0, which uses less energy than the Bluetooth standards of old.

While it’s been too cold and wet out in New York for a proper hike since I’ve had the Surge, I can imagine the GPS mapping feature will be useful the next time I’m out on the trails. While my phone can also map my route just fine, that’s a battery-intensive task. I’d rather eat into the Surge’s battery than risk draining my iPhone, which can make emergency calls or double as a decent flashlight if I get in a jam.

Having a decently-sized screen also solves one of my biggest gripes about my old Fitbit. With the screenless Flex, it was tough to tell when the thing needed to be charged—that info was hidden away in an app I didn’t check often enough and email notifications I rarely opened. That meant I often gave the Flex a double-tap to check my day’s progress towards my step goal only to find it died sometime between lunch and dinner. The Surge, which has given me five or so days of reliable battery life, has a phone-like battery icon that makes charging a far easier to remember task.

But Fitbit is right to call the Surge a “Super Watch,” not a smartwatch. While it has a Pebble-like screen and some useful phone-syncing capabilities, you won’t get the same level of customization or apps here that you’ll find on Android Wear devices or the upcoming Apple Watch.

The Surge’s user interface can be a little counterintuitive, too. Some functions are controlled via swiping the screen, while others are reserved for three hardware buttons, one on the left and two on the right. Switching between data readouts like time, step count and heart rate is done by swiping, for example, but getting into the menu options involves a press of the left button. Why not let me swipe up into the menus?

It’s also far too easy for the Surge to register a left or right swipe when you’re not actually using it. That sounds minor, but it means that when you look at your Surge for a quick glance at the time, instead you often get a look at how many floors you’ve climbed in the day. That’s fixable by making it so that the Surge defaults back to the time/date home screen after a certain amount of idle time.

The Surge didn’t win me over in the style department, either. It’s too sporty-looking for my tastes, though it’s probably fine for the target market—an athlete I am not—and it’s not a problem when I’m hitting the gym. But it’s not necessarily something I want to show off at the office all day.

It’s also worth noting here there have been early reports of the Surge causing skin irritation, an echo of a PR difficulty Fitbit had when its Force first hit the market in late 2013. (The company issued refunds to those who complained.) I haven’t had the same issue, but I’ve been following Fitbit’s advice by keeping the device clean. I also take it off every night, although that means I’ve sacrificed two of the Surge’s best features: 24/7 heart rate monitoring and sleep quality tracking.

All told, the Surge is one of the best devices out there for athletes looking for a feature-packed fitness tracker and who don’t mind the sporty stylings or the high price tag. For the rest of us, Fitbit’s new step-down offering, the Charge HR, offers almost all the Surge’s core features for $100 less. You won’t get the built-in GPS or smartwatch-like display, so that means no text message notifications or music control. But you’ll still get the Surge’s best feature—heart rate tracking—and the Charge HR’s $149 price tag is an easier hit on your wallet.

But as Fitbit readily admits, the Surge isn’t a proper smartwatch by any means—and that could be a problem for Fitbit. Lots of smartwatches already on the market are pretty good at fitness tracking, while Apple is heavily marketing its upcoming $350-and-up Apple Watch towards athletes. Should smartwatches take off as a category, they could do to dedicated fitness trackers what smartphones did to point-and-shoot cameras, voice recorders and Palm Pilots. If the Surge is Fitbit’s first attempt at heading off that potential threat at the pass, the company has a long road ahead to stay relevant in what could become the smartwatch age. 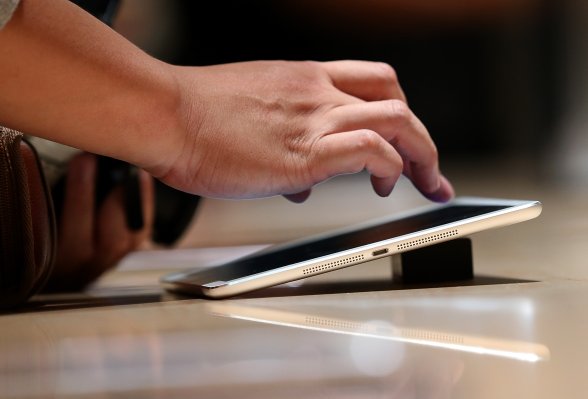 Tablet Shipments Are Officially In Decline
Next Up: Editor's Pick