Egypt Frees Australian Journalist But Leaves Many More in Jail

Egypt’s decision to release Australian journalist Peter Greste on Sunday was met with elation by his family and supporters but underscored the plight of thousands of Egyptians still jailed in an ongoing 19-month political clampdown.

Greste was one of three journalists working for Al- Jazeera English arrested 13 months ago and imprisoned on charges of “spreading false news” and collaborating with a terrorists after a lengthy trial regarded internationally as a farce.

Greste’s two colleagues, Canadian-Egyptian bureau chief Mohamed Fahmy and Egyptian producer Baher Mohamed, remain in prison. Like Greste, Fahmy is expected to be released under a decree issued in December by Egyptian President Abdel-Fattah el-Sisi granting him power to deport foreigners held in Egyptian jails. However, Mohamed, who holds no other citizenship, is not expected to be released.

In an interview on Al-Jazeera, Greste said: “I also feel incredible angst for my colleagues, leaving them behind. Amidst all of this relief I still feel a sense of concern … if it’s right for me to be free, then it’s right for all of us to be free.”

Greste’s release comes in the context of Egypt’s efforts to stabilize relations with other states and resolve the public crisis surrounding the plight of the three journalists. But that pressure is unlikely to alter the fates of the thousands of others, almost all Egyptian citizens, who have been detained, including dissidents, students, protesters, and other journalists.

“Peter Greste’s release is fantastic news for him and his family, but it does not fundamentally change the overall situation in Egypt which is one of a quite severe crackdown in the last year and a half, a crackdown that is probably the most widespread and severe in the history of modern Egypt,” said Issandr El Amrani, North Africa Project director at International Crisis Group.

El Amrani said Greste’s release was explained in part by the international pressure resulting from the Al-Jazeera case. “Even Egypt’s most stalwart supporters like the United Arab Emirates have pushed for something to be done,” said El Amrani. “They’ve been concerned that the imprisonment of these journalists has hurt Egypt’s image and just created a stumbling block, an obstacle to the full rehabilitation of Egypt on the international scene.”

Since Egypt’s military deposed elected President Mohamed Morsi in July 2013, the country’s judiciary and security forces have detained as many as 40,000 people in a campaign against political opponents, according to a database maintained by WikiThawra, an initiative of the Egyptian Center for Economic and Social Rights.

The prisoners include numerous members of Morsi’s Muslim Brotherhood which has been branded an illegal terrorist organization, as well as numerous non-Islamists dissidents, including the well-known faces of the 2011 popular uprising that overthrew Hosni Mubarak. According to the Committee to Protect Journalists, Egypt is also the sixth leading jailer of journalists in the world, with 12 journalists in prison at the end of 2014.

Separately on Monday, an Egyptian court sentenced 183 people to death on charges of killing 16 police officers in the town of Kerdasa, on the outskirts of Cairo, during violent unrest between supporters of deposed president Morsi and the security forces. The ruling was the latest in a series of mass death sentences issued by Egyptian courts over the last year. The mass trials of protesters and alleged insurgents have underscored the aggressive agency of Egypt’s judiciary in the political clampdown. Many Egyptian judges regard the Brotherhood with hostility, and reviled Morsi for threatening judicial independence. Others bring an ideological zeal to trials involving alleged Islamists.

Throughout the clampdown, the three Al-Jazeera journalists have been among the most visible detainees in the Egyptian prison system. Their arrest and trial garnered the attention of news organizations and foreign heads of state. But the divergent fates of the three underscored what the families of some journalists said was discrimination on the part of their government.

“The three of them were tried in one trial. How can two of them be released while the third is imprisoned?” said Jihan Rashed, the wife of producer Baher Mohamed. “I ask that they not discriminate between foreigner and Egyptian, from Arab, from any nationality.”

Another jailed journalist whose plight has received little attention is freelance photographer Mahmoud Abou Zeid, known by his nickname “Shawkan,” who has been held without trial since August 14, 2014. A contributor to TIME, Die Zeit, and the Demotix photo agency, Abou Zeid was initially detained while documenting the government’s deadly expulsion of protesters from Cairo’s Rabaa Al-Adawiya Square. His detention has been renewed by judicial order ever since.

“The Egyptian government ignored him, because he’s Egyptian, not Australian or any other nationality,” said Yehia El Sherbini, a close friend of Abou Zeid. “They took his camera and destroyed it. Why destroy his camera? Why kidnap him and put him in prison? Why? It’s not fair. He’s done nothing wrong. He was doing his job.”

While thousands remain in prison, it remains unclear what, if anything, foreign governments can do to change the overall behavior of Egypt’s institutions. “Clearly they don’t care as much as they used to care under Mubarak,” said El Amrani. “Mubarak was sensitive to some extent to the way Egypt’s image abroad and did make concessions, for example allowed a greater degree of media freedom than currently exists.”

Complicating matters is the ongoing interplay between the executive, the military, and the judiciary. “It’s not so much a question of this is the new normal,” said El Amrani. “We don’t know yet. The regime that followed the overthrow of Mohamed Morsi is still very much in formation.” 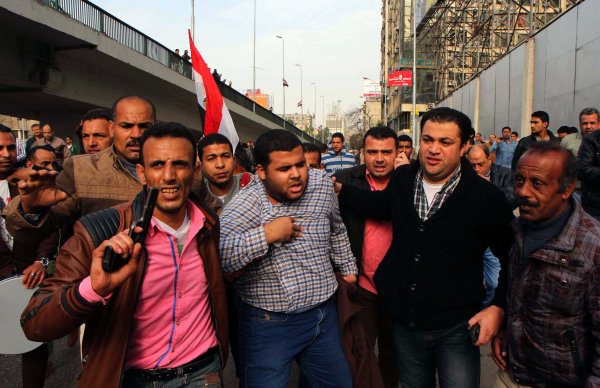