“Fatty, fatty, bom, bom!” I screamed, and the other 12-year-old girls around me laughed hysterically.

We pointed, laughed some more, shouted out similar chants, as we ran around our school’s racing track. There were five of us, and our energy was focused on one girl, running alone, tears welling up and nobody to help her. She was our victim; she was no match for the collective energy of a group of self-appointed “cool girls.”

We let the girl overtake us on the track while we ripped her apart in private conversation.

“Her boobs look so weird, she can’t even run with them.”

“She got her period so young, there must be something wrong with her.”

As the girl continued running, boys from our grade walked by on their way to soccer practice. Perfect timing for us, as we watched them shame her body too, echoing our sentiment, validating that we had a right to our behavior. The girl, named Felicity, nickname Flick, continued running.

A lot of people assume that when kids are mean, they don’t really know what they’re doing; that they’re harmless, really. I knew exactly what I was doing, and I knew how it would affect Flick, because I’d been a victim of it for years.

From when I was seven to 13, I had no friends. None, absolutely none. And I wasn’t just left alone to quietly get on with life; kids made fun of me constantly. I had headgear (followed by all other kinds of lisp-inducing braces), horrendous granny-floral glasses and, best of all, warts. A ton of warts on my hands and arms.

Not only was I visually destined to be an elementary school outcast, but pretty soon my personality changed to fit the profile, too. I wouldn’t understand for many years later that people, particularly kids, absorb the identities they are given by others.

I subconsciously developed nervous tics, including counting everything I did in eights, right down to the pieces of toilet paper I used. I obsessively repeated whatever people said to me under my breath, over and over again until someone else spoke to me and I’d change the sentence.

One afternoon, aged 10 in the girl’s locker room (a place designed for bad things to happen) I became so frustrated with the other girls sharing inside jokes I wasn’t a part of, and so paranoid they were talking about me, I slammed the hairbrush I was holding onto the floor. It terrified the girls, only making them more inclined to shout “freak.”

So it was pretty great for me when Flick showed up in school. Finally, I wasn’t the biggest weirdo in town. I was pretty relieved everyone seemed to be bored of picking on me, and had moved on to something else.

In my school, tormenting others was the top social currency. I soon realized that not only did I need Flick to distract people from my own inadequacies, but if I joined in with everyone else, maybe I’d finally be accepted.

So there I was, chasing her around the running track, making her sob, breaking her down mentally, like there was no tomorrow. Like I didn’t know what that felt like.

The irony was, of course, I didn’t really like the cool kids. I had nothing in common with them, and they with me. The person I liked the most, if I was honest with myself, was this girl I made cry every day.

When we first met, at the school’s “Welcome Day” for new students, Flick seemed so comfortable in her own skin, so at peace with herself that she gave off a magnetic energy. She wore one of those Lizzie McGuire-esque rainbow tie dye tops, and pink jelly sandals (which I was obsessed with, and my parents never let me get). I’d never met anyone my age like that, and I so desperately hoped that she would overlook my shortcomings, and just like me.

I only stopped bullying Flick when a teacher forced me. The teacher was cool, young, and most of the preteen girls saw her as an older cousin. It made it all the more humiliating when we were made to apologize to Flick and reprimanded for our shameful behavior. Later, we discussed how we couldn’t believe Flick lied and said we were bullying her. She obviously wanted attention.

Too scared of punishment to go near Flick, the girls soon turned their cruelty onto me. I was so, very livid—hadn’t I proved myself to be just like them by now? What had all that effort been for?

Everything came to a head the summer before eighth grade when I was invited to a sleepover party with just a few of the girls. I picked out my clothes and PJs meticulously. Maybe I’d fool them into thinking I’d gotten cool over the summer.

That night, the girls were unrelenting. It became very clear that I was simply there because they weren’t allowed to watch TV past 9 p.m.

They took chocolate cake and wiped it over my face, and I let them. We played one game, I can’t remember the rules for it, but I ended up naked and they laughed at how I had no breasts. I was confused—hadn’t we laughed at Flick for having breasts? I took my things into a corner and slept backward in my sleeping bag so the hood would cover my face and they wouldn’t be able to draw things on me while I slept. They put my hand in a bowl of hot water so I wet myself.

When my mother drove me home the next day, I cried hysterically and wouldn’t tell her what happened. When school started the next week, it was very clear to the class that I’d been demoted.

It didn’t take long for Flick to offer to be my friend. She’d gotten herself some of her own by that point — other girls who’d been bullied, they were sort of forming a club — and they took me in. There were no questions, no conditions; I wasn’t reverted to the bottom of a food chain because with them there wasn’t one.

It turned out that not only did Flick and I have a lot in common, we were pretty normal teenage girls; boy-obsessed, emotional, big on daydreaming. We shared secrets, we made each other scrapbooks.

Once we took the train from our suburb into London by ourselves, without permission, and way too young. As soon as we we frolicked out of the station, I remembered my mom would be picking me up in half an hour from her house, so we frolicked right back onto the train. I thought we were the coolest girls in the world.

Years later and eating dinner at Flick’s house, her kid sister burst out, “Didn’t you used to bully Flick?”

As I sat, frozen in shame, Flick replied, “Yeah… how embarrassing for her!” She winked at me, a familiar expression. That night, I gave her a long-overdue apology.

“When it happened to me, I wanted to die sometimes,” I said.

Fast-forward to today, and my best friend is essentially winning at life. She graduated from the University of Cambridge (yes, that Cambridge) after a year of volunteering in Uganda. She survived a motorcycle crashing into her in Kampala and now calls it a “funny story.” She was elected into a full-time job as the President of Cambridge’s Student’s Union. She got her nose pierced. She still loves rainbow-colored anything. She now works with a teenage girl with Asperger’s Syndrome as her classroom aid.

And last summer, I walked down the aisle as her maid of honor, and watched her marry a loving man who is her equal in kindness and strength.

I had boyfriends in school but I call Flick my “first love” because she was the first person in my life who chose to love me. I wasn’t her family; I was a girl who had made her life hell for a long time. Our lasting friendship continues to teach me the power women gain when we forgive and lift each other up.

In one of the scrapbooks Flick and my other first friends made me, I wrote a note in the back page to myself:

Read next: Bullying Is Good For Your Health 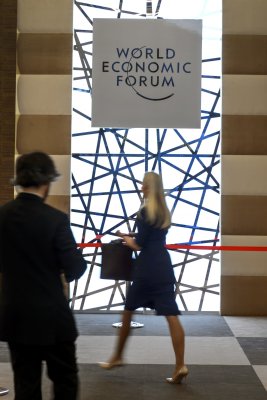 What Davos Is Like for a Female CEO
Next Up: Editor's Pick