Enjoy These Super Bowl Ads, for Tomorrow You Shall Die

Super Bowl XLIX was marked by agony, heartbreak, and the constant awareness of a clock ticking off the fleeting seconds until the end.

Oh, the game was really exciting too.

The tickingest secondhand of the night, however, was on the watch in the Grim Reaper’s breast pocket. The usual mix of talking animals and celebrity cameos among the big game ads had a distinctive theme of memento mori, with sentimental, even morbid ads reminding viewers that our time on this Earth is brief.

The most death-forward commercial of the night was, of course, the chilling Nationwide insurance ad featuring “The Boy Who Couldn’t Grow Up,” whose narrator said that he’d never be able to live a full life because he’d died in a preventable accident. A noble enough cause, obviously–not to mention resonant in the midst of a measles outbreak with parents opting out of vaccines for a preventable disease–but not the usual sort of thing people expect to hear over rounds of wings and guacamole. (If nothing else, maybe a few parents got up during the commercial break to make sure their flat-screens were secured.) Even in Budweiser’s most buzzed-about ad of the night, an adorable lost puppy nearly went to the big doghouse in the sky because of a run-in with a hungry wolf.

But the night was full of manipulative, tearjerking ads that played on the idea of the shortness and fragiity of life in less-direct ways. There were enough ads reminding fathers in the audience how short their time with their children is that the night felt like a stealth Oscar campaign for Boyhood.

In a Toyota ad, memories of a girl’s childhood play out on screen as her teary father drives his daughter to the airport to start a military deployment. For Nissan, a race-car driver misses much of his son’s childhood while off at the races, which he remedies in the end with… another car?

Even some of the night’s more uplifting ads had an undercurrent of melancholy, as if saying, “Tell somebody you love them today, because who knows how much time you have left!” Thus McDonald’s “Pay with Lovin'” spot, highlighting an unusual promotion in which random customers get free food in exchange for, say, calling up their mothers to say that they love them. (To all McDonald’s cashiers who are today witnessing unsolicited demonstrations of “Lovin'”–my sympathies, and tell that guy to put his clothes back on.)

What’s with all the sap? Has Madison Avenue just finally, collectively watched the Mad Men “Carousel” scene too many times? Part of what’s at work this year, it seems, is that eternal paradox of “socially conscious” advertising: the appeal to people’s sense that they need to refocus on less ephemeral, material things, in an effort to sell them ephemeral, material things.

That seems contradictory, even hypocritical, but not in any way that’s new to advertisers. Commercials often sell products by appealing to the consumer’s dissatisfaction–up to and including dissatisfaction with the modern consumer lifestyle that the ads help create. There was a theme in some of the ads that they needed to reach a consumer base that is, on some level, worn out by the very loud, crass media culture that advertising needs to reach them through.

So Coca-Cola, which last year aired the lovely, multicultural “America the Beautiful” in different languages, this year has a Super Bowl spot that played on exhaustion with online negativity, imagining a torrent on social-media hate being turned into love because someone, essentially, spilled Coke on the Internet. (PSA: I’ve done that to my laptop before. It does not have the same effect.)

Likewise, Always’ feminist “Like a Girl” ad sought to counter stereotypes that girls are bad at sports. The third in the troika of Dadvertising spots, from Dove, also subtly pushed at the social boundaries around men’s roles, arguing that strong men and fathers “care”–about their children and their skin moisturization. Presumably in that order.

It all made for a jarring combination of capitalism and philosophy, as when Jeep extolled the virtues of using its cars to travel the world’s wide-open spaces–to the tune of “This Land Is Your Land” by Woody Guthrie, an anticorporate folksinger who didn’t exactly write his communitarian anthem to sell off-road vehicles.

Sorry, Woody. But as this year’s ads reminded us, death comes to us all someday. And then your songs go into public domain. 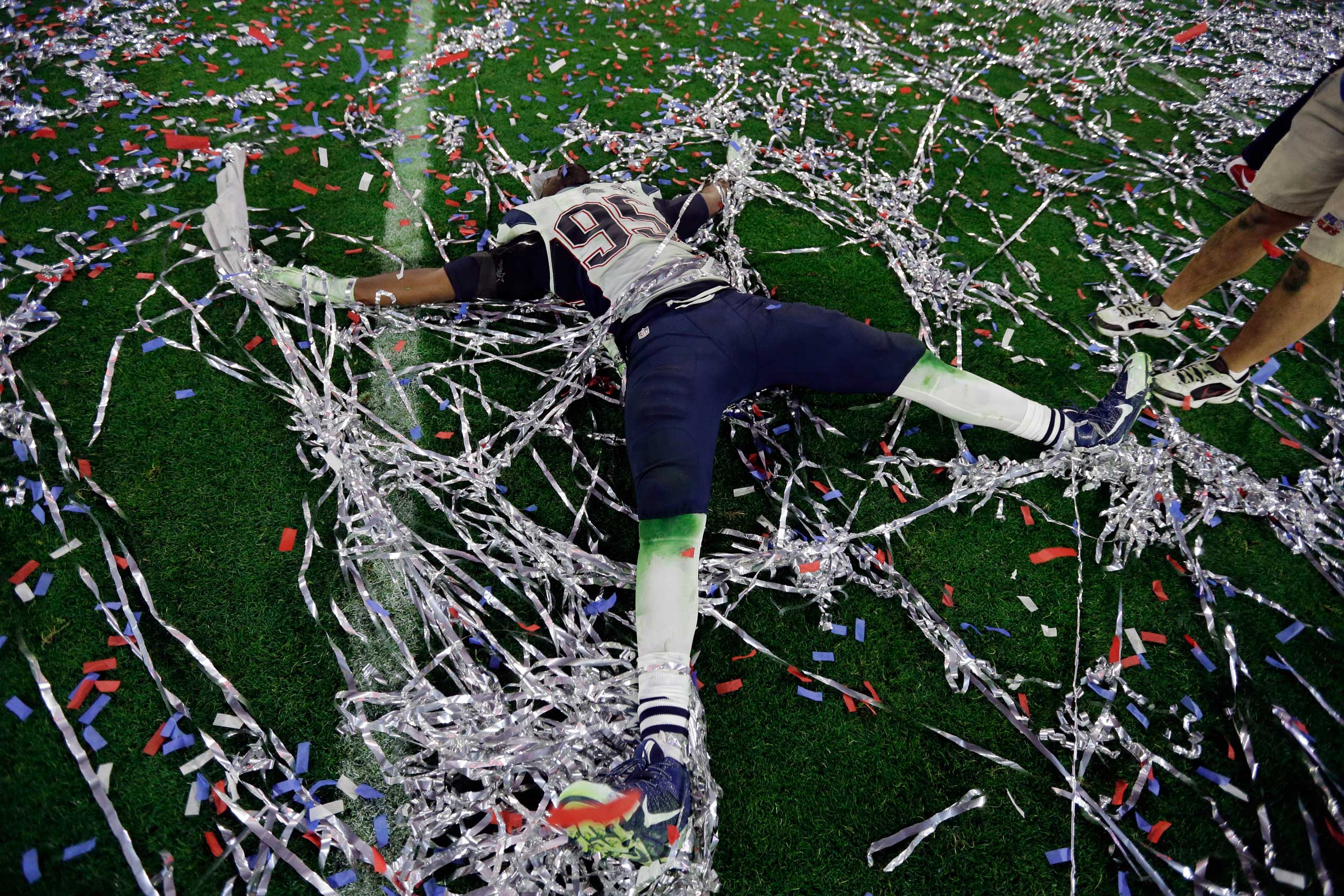 Chandler Jones of the New England Patriots celebrates after the Patriots defeated the Seattle Seahawks 28-24 in the Super Bowl XLIX on Feb. 1, 2015, in Glendale, Ariz.
Ben Margot—AP 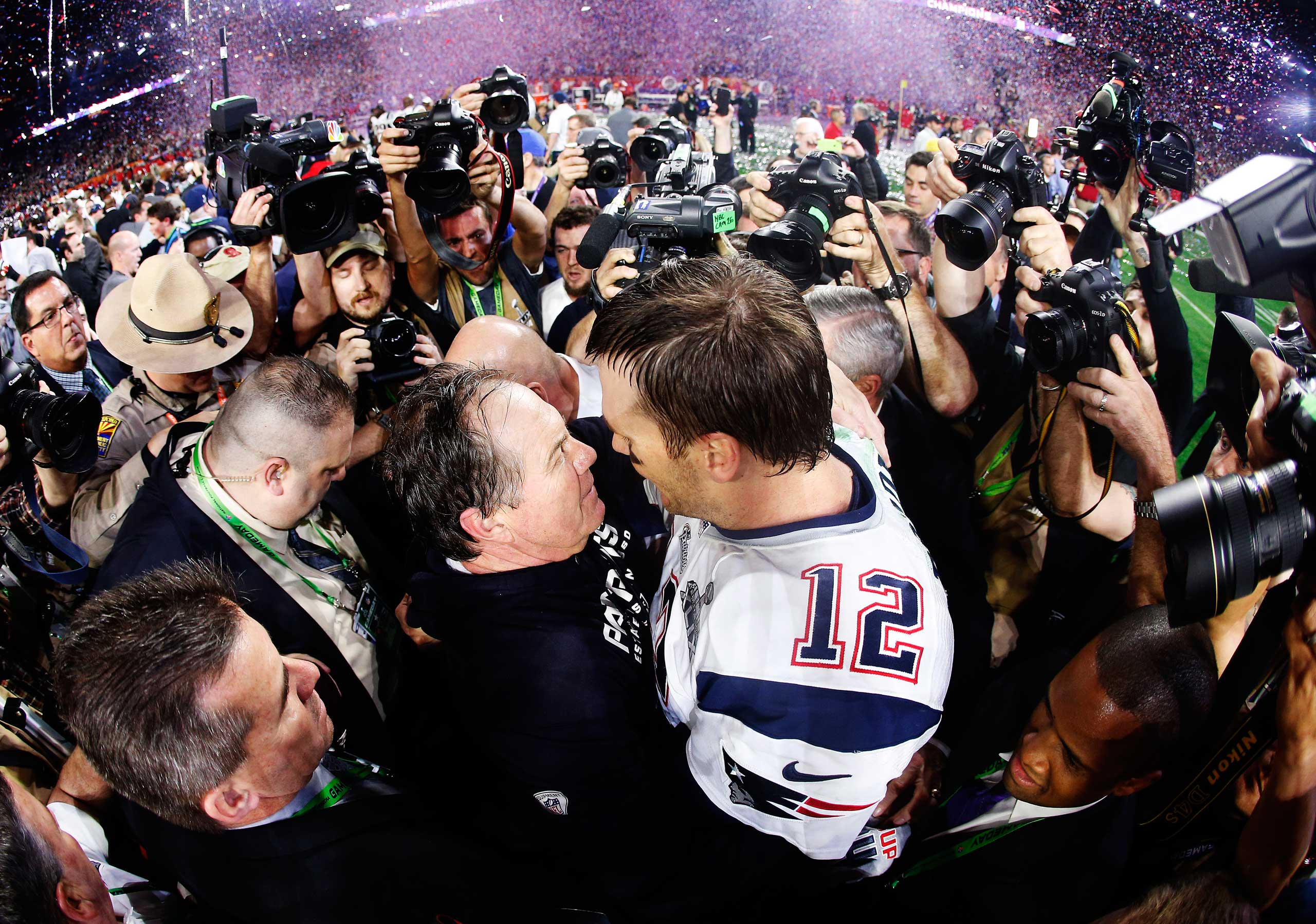 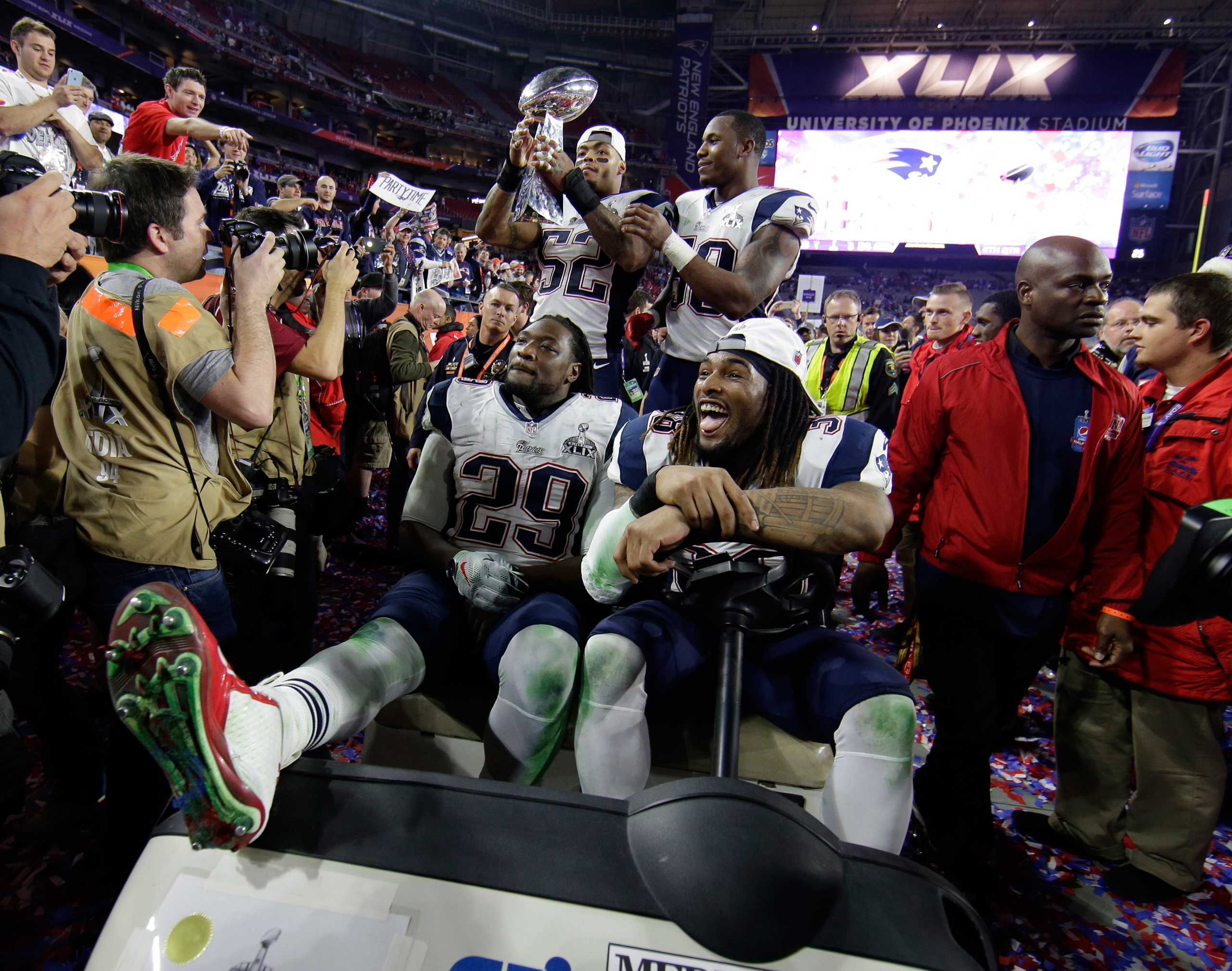 New England Patriots' Jonathan Casillas holds up the Vince Lombardi Trophy as he celebrates with his teammates after the NFL Super Bowl XLIX football game against the Seattle Seahawks on Feb. 1, 2015, in Glendale, Ariz.
Matt Slocum—AP 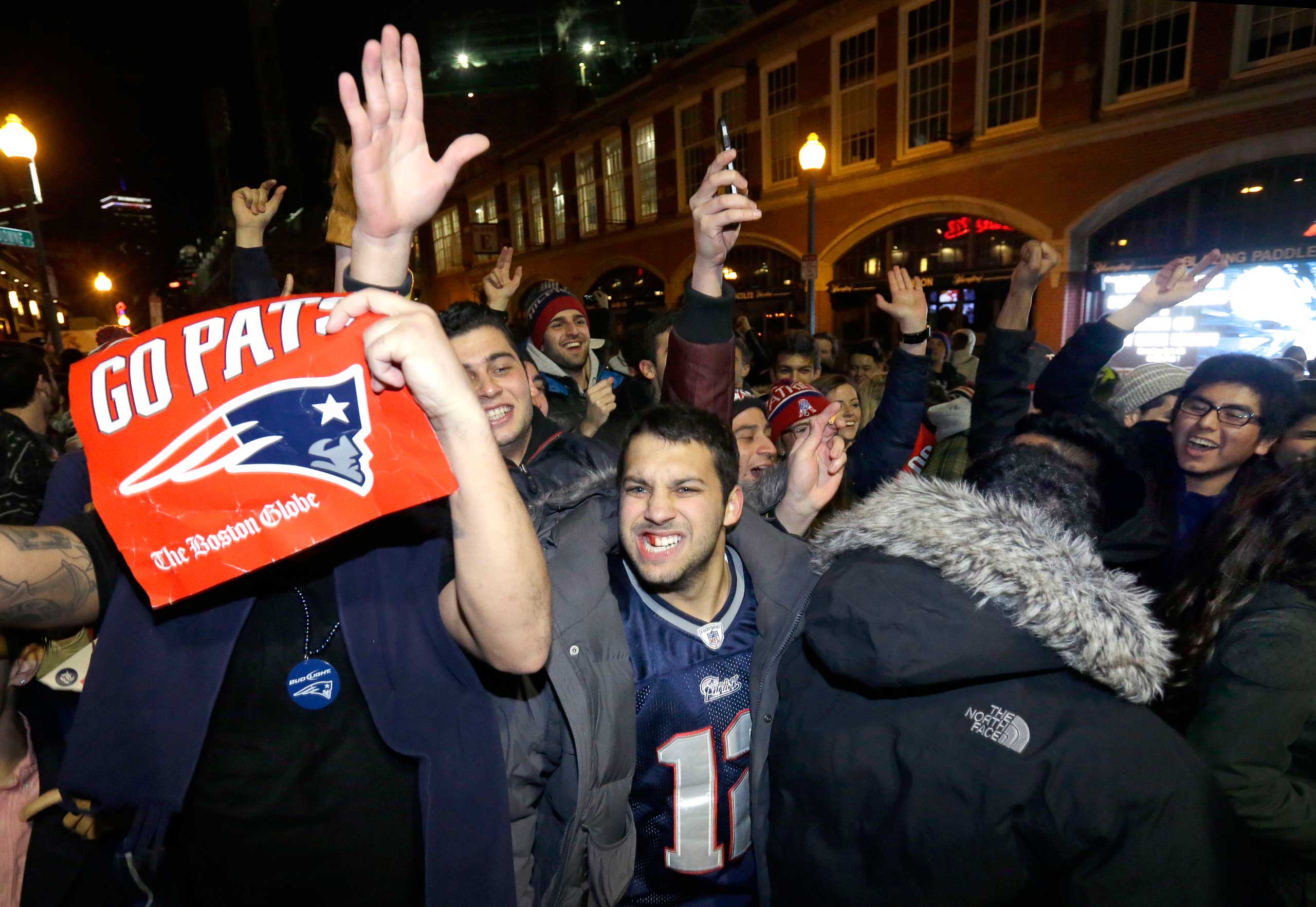 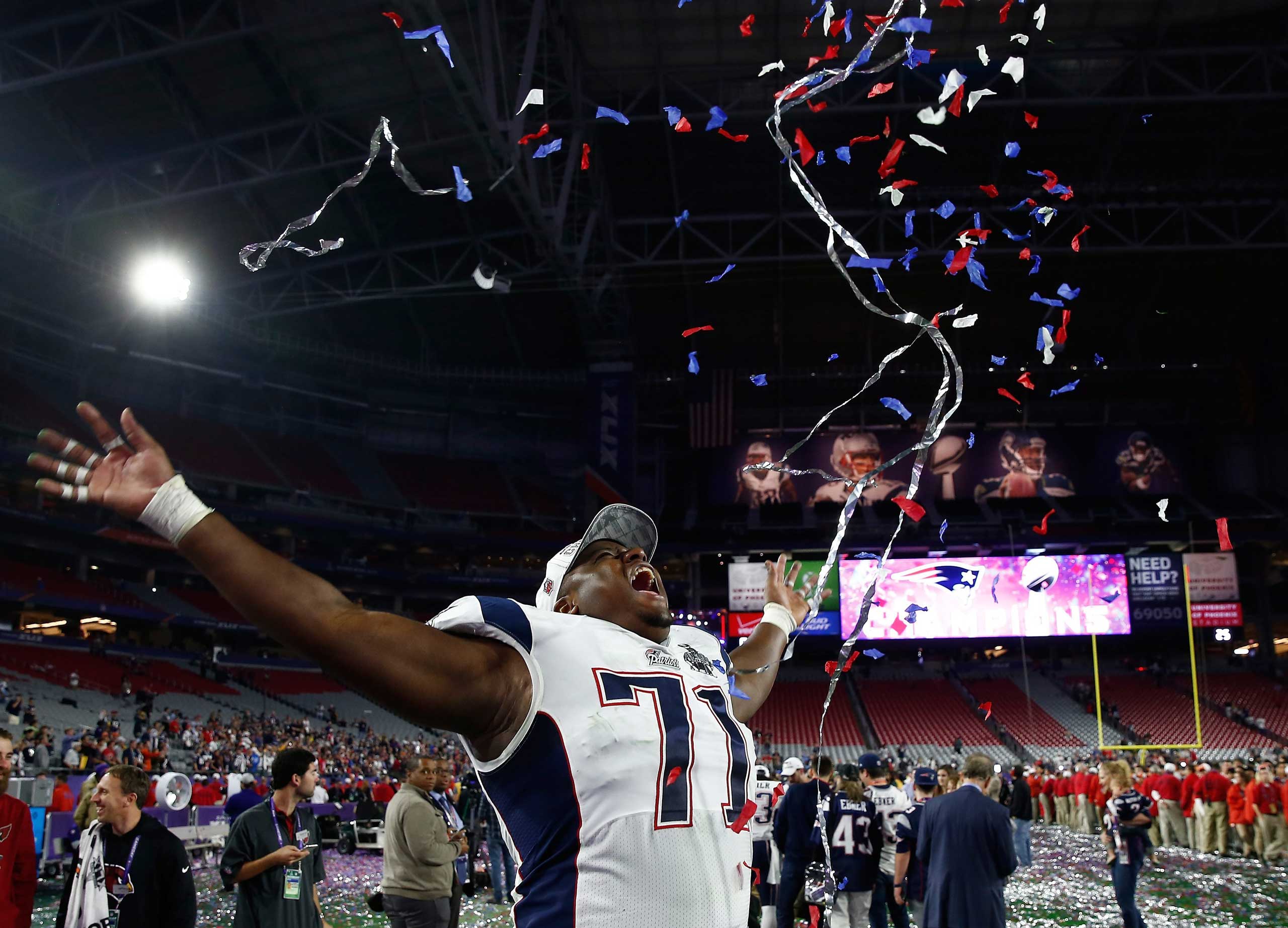 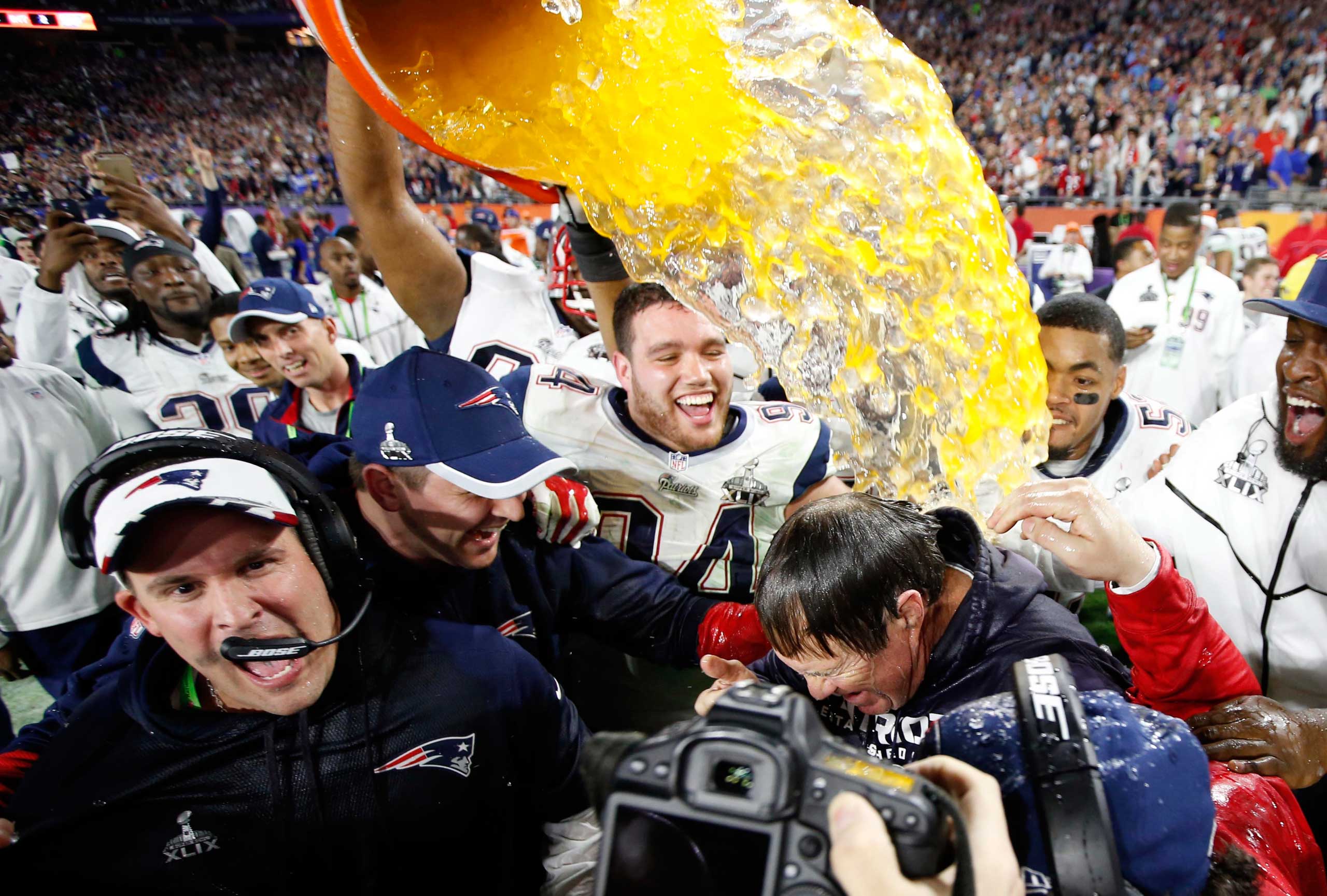 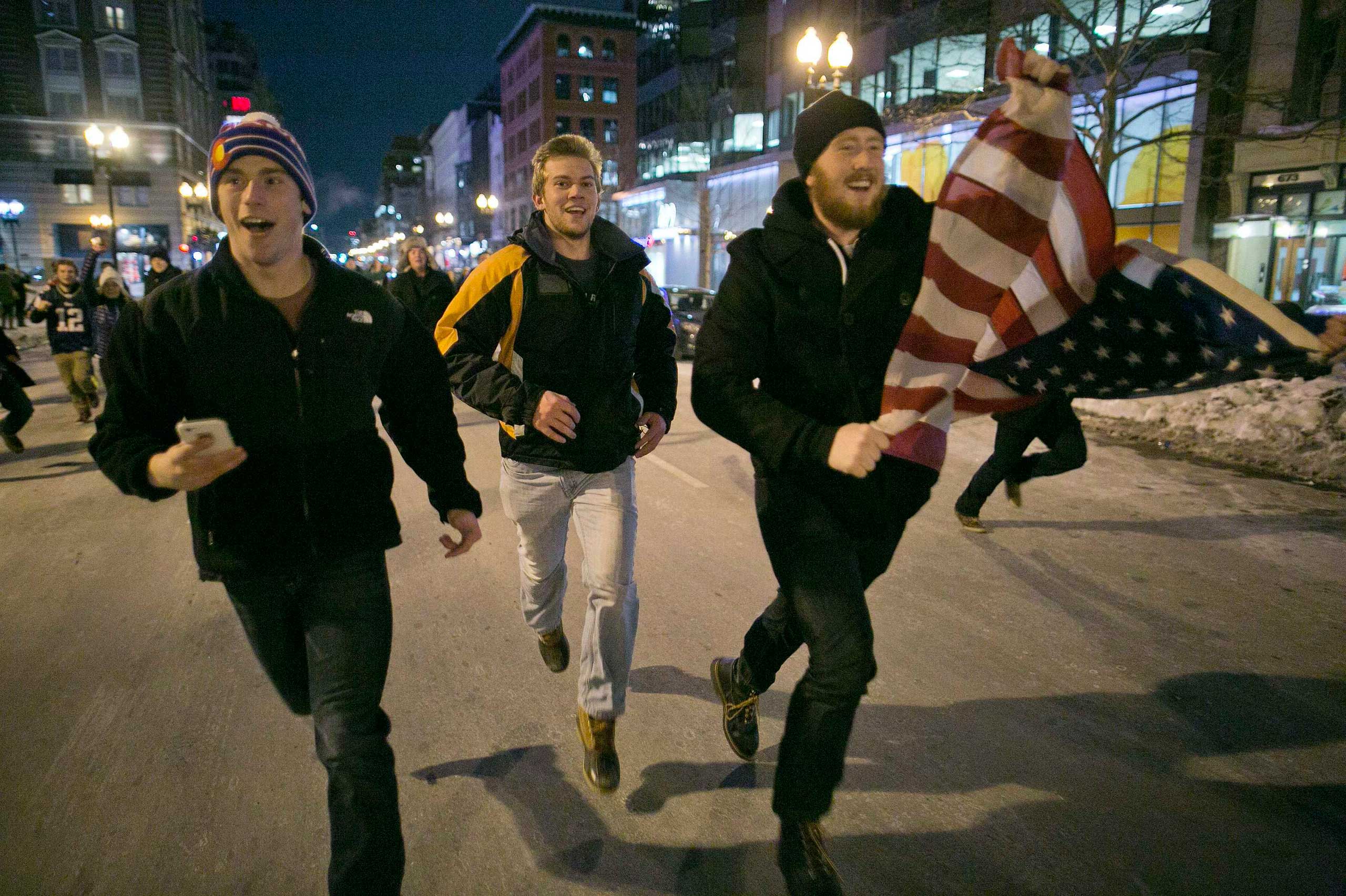 Fans celebrate in Boston after the New England Patriot won the Super Bowl XLIX against the Seattle Seahawks on Feb. 1, 2015.
Dominick Reuter—Reuters 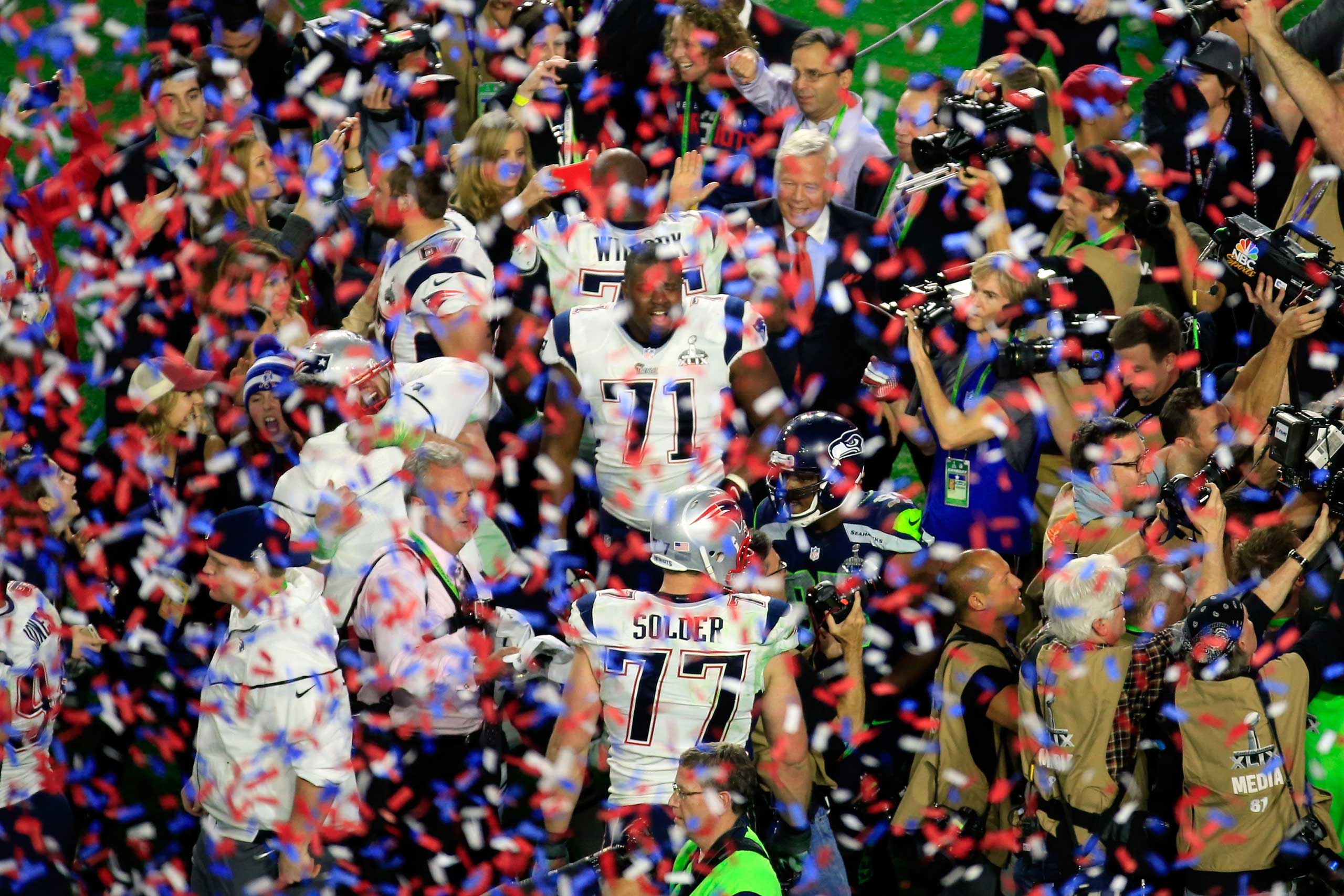 Cameron Fleming of the New England Patriots celebrates with teammates after defeating the Seattle Seahawks during Super Bowl XLIX on Feb. 1, 2015 in Glendale, Ariz.
Jamie Squire—Getty Images
1 of 8
Advertisement