The Wire, Serial and the Decline of the American Industrial Empire

Clarke Peters, left, and Dominic West in a scene from season five of "The Wire"
Paul Schiraldi—AP Photo/HBO
By Katrina Gulliver

When The Wire first aired on HBO, critics and fans swooned over the performances of Idris Elba, as drug pusher Stringer Bell, and Dominic West as the shambolic but determined detective Jimmy McNulty. But the often-overlooked star of the series was the city of Baltimore itself.

While ostensibly a dark police drama, The Wire is also a window into the history of Baltimore over the last 30 years, and what happens when sociological theories become public policy. The viewers hailing it as the best television show ever made were being shown a side of American urban history that is rarely explored in such detail.

The Wire is a story of systems, people’s role in them and resistance to them. The global capitalist system is the force that has built up and then abandoned Baltimore. In season 2, longshoremen are shown a promotional film of robotic cargo handling at Rotterdam, and realize that their jobs will be eradicated by this new technology. They are unable to resist this change.

The importance of “the system” extends to all of the characters. In 1938, Earl R. Moses conducted a study on the “Negro Delinquent in Baltimore” for the Works Progress Administration. This study was included in Clifford R. Shaw and Henry D. McKay’s influential 1942 book Juvenile Delinquency and Urban Areas, which promoted Social Disorganization theory to explain the phenomenon of juvenile crime. This book’s introduction endorsed the new federal housing projects that were then being proposed, and which later formed the main location for the start of The Wire. Social disorganization theory holds that location is the key factor for crime, not an individual’s race or personal tendencies: put very simply, people in rough neighborhoods are more likely to be rough. Paradoxically, while housing projects were meant to clean up crime-ridden areas, in many places they made it worse — for precisely the reasons the sociologists should have expected. Once criminal elements took over the projects, kids within them were more likely to be drawn to crime.

These projects — and the world they created — were partly responsible for how gang crime changed since the 1960s, when it was largely a juvenile phenomenon of petty delinquency, to a system of groups that include older members and more entrepreneurial activities. Changing attitudes in social control meant that, rather than seeing troublemaking youngsters in need of guidance, authorities saw organized crime in need of punishment.

And, though social disorganization theory fell out of favor after the 1960s, around the same time that the nature of gang crime changed — and when criminologists often turned to cultural explanations, for example the idea that young, black men are violent because of the legacy of slavery, or because of absent fathers — it has recently come back into vogue. The “broken windows” policing theory is related to social disorganization theory; both share the emphasis on place as a contributing factor in crime.

But what makes this scene distinctive to Baltimore as opposed to any other city plagued with gang crime? Why is this place special? It’s a matter of scale: The Wire depicts a world in which gang participation had reached a critical mass. The teenagers involved are not deviating but conforming. While these young men have been largely excluded from the legitimate economy, participation in a gang can offer a job, a sense of inclusion and also protection. (Even though it will never be lucrative for most participants. As Stephen Dubner and Steven Levitt showed us in Freakonomics, while the leaders may profit, the kind of money filtering down to the lowest level soldiers, or “hoppers,” is very small.)

Despite the numbers, members of the urban underclass are not empowered citizens. They are not citizens at all, in police parlance, a “citizen” being a law-abiding, presumably tax-paying, member of the community. Even the gang members on The Wire recognize and accept this classification themselves, distinguishing in their own victims between fellow criminals and “citizens,” and priding themselves on not harming the latter. So, in the context of this community, a large proportion of the black male population will never be regarded as “citizens.” Thus they are faced with resisting a system from which they are excluded, and which regards them as a problem to be managed.

Which brings us back to the housing project, one of the management systems used. We learn from the show that all residents of are photographed for identification and security. In addition, the police are often watching from rooftops, taking photos: making the housing projects a panopticon in which all are under scrutiny. Supposedly to “detect and punish deviance,” in the words of James C. Scott’s Domination and the Arts of Resistance, CCTV seems to be a punishment in itself, denying people privacy. In The Wire, the opening credit shot shows a more aggressive resistance to this oppression, as the view is shown through a CCTV camera that is hit with a rock, fracturing the lens.

In reality, the city has tried — as other post industrial cities have — to find ways to resist or accommodate an economy in which its old industries are no longer needed.

Anyone visiting Baltimore today can see its waterfront regeneration, which was depicted in The Wire from the perspective of political corruption and a working class forced out by gentrification, but this redevelopment doesn’t necessarily reach the average resident. And the city still feels awkward about its past. It lacks a city museum; H. L. Mencken’s house is no longer open to the public; Edgar Allen Poe’s house has also struggled despite the efforts of fundraisers, its ability to attract visitors no doubt impaired for many years by its proximity to the crime-ridden Poe Homes projects. The biggest tourist draw is Fort McHenry, just outside the city.

Baltimore’s murder rate went from 27.6 per 100,000 in 1985, to a peak of 48.2 in 1993. It remained close to that peak through the 1990s, and had dropped back to 37.3 in 2009 and remains there currently, according to FBI figures. This is better than it was, but still equates to over 230 homicides annually, and demonstrates that Baltimore has not seen the massive drop in violent crime experienced in other big cities. (New York’s murder rate is now 4, and Chicago’s 6.5.)

More recently, the podcast Serial drew the eye of crime watchers back to Baltimore, by investigating the 1999 murder of high schooler Hae Min Lee. Serial is not The Wire—it’s not fiction; it takes place in Baltimore County rather than the city; its focus is a single crime—but it touched on a number of elements of Baltimore’s crime narrative. Most disturbingly, one episode discussed Leakin Park, where Lee’s body was found. This wooded park has been notorious since the 1960s for the number of bodies dumped there. The same location was discussed in The Wire, where a detective talks of going to look for a body there, and being warned, “We’re looking for one body in particular—if you go grabbing every one you see, we’ll be here all day.” There’s even a website that keeps a ghoulish tally of the bodies found there, and it is assumed there are more than have been recorded — another example of the importance of place. Even as the city tries to rebound in reality, these two very different narratives keep bringing back the bad associations for Baltimore, which is even more unfortunate if one subscribes to theories about location.

By inviting us to witness those “sharing a dark corner of the American experiment,” as the show phrased it in Season 3, The Wire explains the recent history of Baltimore, a city that has been sidelined in American popular culture of the last generation. And though its story is specific, its broader message is the decline of the American Industrial Empire, and how one of the biggest cities in America became a byword for crime and decay: “Charm City” indeed. 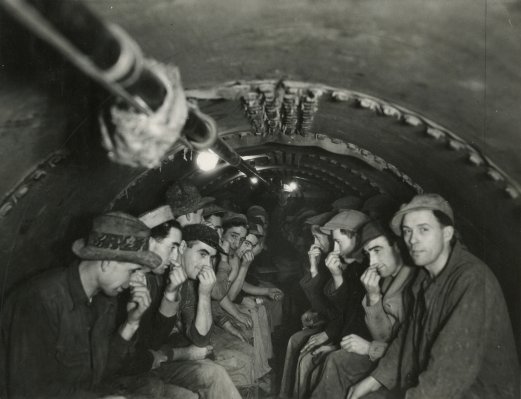 See How Subway Systems Have Evolved in the Last Century
Next Up: Editor's Pick