Behind the Scenes of the Puppy Bowl

Puppies tussle with a plush football at the "Puppy Bowl" in Phoenix, Jan. 29, 2015.
Daniel Wallis—Reuters
By Nicole Conlan / Sports Illustrated

There are many reasons to become a sports journalist. Maybe you want to expose corruption, or do the kind of deep statistical analysis you can’t find anywhere. Or maybe, like me, you just want to go to The Puppy Bowl.

If you’ve been living under a rock for the past decade, The Puppy Bowl is Animal Planet’s solution to every television network’s problem of what to broadcast against the nation’s top-viewed program of the year. Now in its 10th year, The Puppy Bowl is the second-highest rated broadcast on the day of the Super Bowl.

The old adage in showbiz says never to work with animals or children, so the logistics of working with animals who are also children can be tricky. The 3-yard by 10-yard field is manned not only by the referee you see on television, but also animal handlers for each animal, numerous producers, and about 10 cameras to catch all the action. Also numerous? Big jars of peanut butter, which producers put on the camera lenses to get the puppies to lick them. This year’s halftime performers will be Nigerian dwarf goats, who sources tell me “like to stand on boxes.”

This year’s roster is composed of 84 puppies from 37 shelters and private homes from around the country. These puppies are vetted (pun intended) by Animal Planet’s casting directors, who have the enviable job of looking at puppy audition tapes in the weeks leading up to filming. Marcia Mansell and Kathy Jung of the Nevada SPCA told us that these audition tapes consist of “five minutes of them playing.” The puppies were held in a large room adjacent to the studio in pens divided for different sizes of dogs. If you think this sounds like heaven, well, you’re right.

Many of these tapes are blind submissions from pet owners looking for a chance at the spotlight, but other puppies were actually scouted by Animal Planet. A puppy named Lorelai from Iowa was one such dog. “Someone from Animal Planet found us on Pet Finder and reached out to us,” said Amy Heinz of Iowa’s Heinz 57 Pet Rescue, who has brought puppies to the last three Puppy Bowls. “We brought a lot of dogs, so we rented a big SUV and drove about eighteen hours to get here. We have crates for half of them and a playpen for the rest.”

Some of the puppies provided by shelters have already been placed in new homes, but others haven’t. When I asked Heinz if she saw any boost in adoption rates after the broadcast, she said, “An enormous boost. We doubled our adoption rates after our first year appearing on the Puppy Bowl.”

Bronte, a pitbull from Healing Species shelter in South Carolina, was one such case. “We rescued his mother and a litter of puppies,” said Healing Species president and founder Cheri Brown. “We’re a shelter that specializes in abuse and cruelty, and this was one of the worst cases we’ve ever seen. The mother was dying, but she’s fine now. Bronte was covered in fleas and had intestinal parasites known as Coccidia. If we had found him a day later, I don’t think he would have made it.” Another puppy, Kino (a strong candidate for this year’s MVP), showed up to the Nevada SPCA in a cardboard box.

Has the Puppy Bowl convinced you to adopt a dog? Great! Amy Heinz, who does home visits for every dog before adopting them out, told me the three things you should consider before taking a furry friend home with you:

— Do you have the time? Puppies are a LOT of work, way more than you think. An older dog requires less time, but is still a commitment. If you don’t have time but still want to get in on that puppy action, consider volunteering at a shelter.

— How willing are you to train the dog? If you don’t know how to do it and don’t want to learn, consider an older dog or obedience school.

— The right size dog for the right space. If you live in a New York City studio apartment, maybe the St. Bernard you’ve had your eyes on is a bad fit. And if you live on an expansive ranch, an English Bulldog with breathing troubles might not be able to keep up with you.

After an eventful day of playing football (kind of), the puppies were all tuckered out and headed home for the day. I won’t spoil the results for you, but I think we can agree that the real winner here is all of us. We all win. 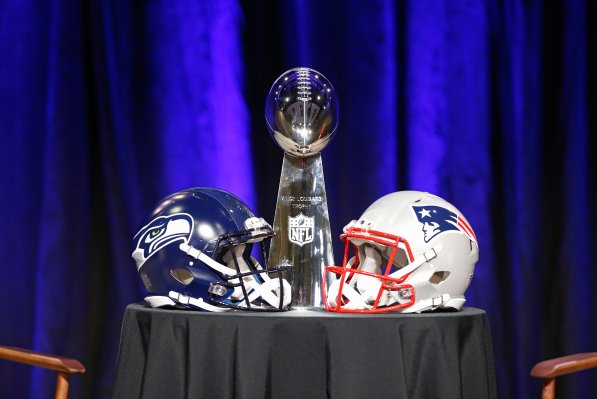 Why the Patriots Will Win the Super Bowl
Next Up: Editor's Pick