Rasheed Sulaimon of the Duke Blue Devils celebrates against the Louisville Cardinals in the first half of the game at KFC Yum! Center on Jan. 17, 2015 in Louisville, Kentucky.
Joe Robbins—Getty Images
By Sports Illustrated

Over 20 games this season, Sulaimon has averaged 7.5 points, 2.0 rebounds and 1.8 assists. The junior was shooting 41.3 percent from the field and 40.4 percent from three-point range.

His playing time has decreased since his freshman season, from 29.2 minutes per game to 19.3. Sulaimon had scored only seven points on 2-of-9 shooting combined over Duke’s last two games.

“Rasheed has been unable to consistently live up to the standards required to be a member of our program,” coach Mike Krzyzewski said in a news release. “It is a privilege to represent Duke University and with that privilege comes the responsibility to conduct oneself in a certain manner. After Rasheed repeatedly struggled to meet the necessary obligations, it became apparent that it was time to dismiss him from the program.”

The release notes that Sulaimon is in good academic standing, and is expected to finish the spring semester.

The No. 4 Blue Devils lost at No. 8 Notre Dame on Wednesday and will face No. 2 Virginia in Charlottesville, Va., on Saturday. 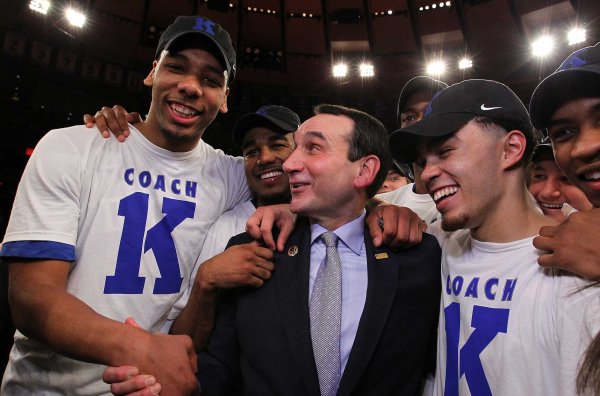 Duke Basketball Coach Is First to Get 1,000 Wins
Next Up: Editor's Pick