Russia Says It Would Consider Financial Help for Greece

Russia’s finance minister said his country would consider providing financial support to Greece, raising the stakes for the European Union as it confronts the new Euroskeptic reality in Athens.

Anton Siluanov told CNBC that Russia has not received a request from Greece for assistance, but his comments come days after the anti-E.U. party Syriza won parliamentary elections, vowing to renegotiate aid packages from the bloc that are tied to strict austerity measures.

“We can imagine any situation, so if such petition is submitted to the Russian government, we will definitely consider it,” he said, “but will take into account all the factors of our bilateral relationships between Russia and Greece, so that is all I can say.”

The Greek government’s clash with the E.U. over its debt risks cutting the country off from euro zone lenders and private investors. That could create an opening for Russia to expand its influence in Greece—an ugly prospect for the E.U. as it engages in a sanctions battle with Russia over the conflict in Ukraine.

E.U. foreign ministers agreed on Thursday to impose a new round of sanctions, according to the Associated Press, apparently overcoming for now concerns from the new Greek government about expanding the rift between the EU and Russia. 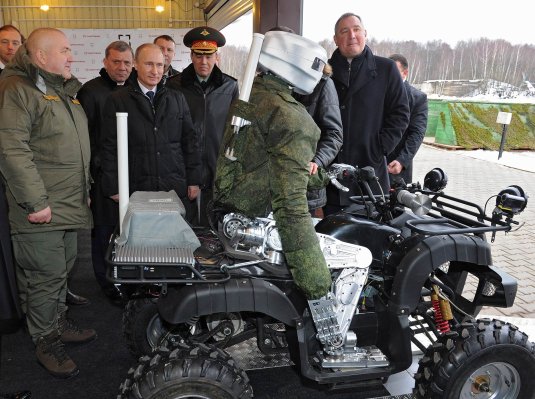 Watch the Russian Military Present Putin With a Cyborg Biker
Next Up: Editor's Pick