Thursday nights are finally fun again. After several weeks of winter hiatus, the Shonda Rhimes trifecta—How to Get Away With Murder, Scandal and Grey’s Anatomy—returns tonight with brand new episodes, and a little extra bling. For actress Viola Davis, the latest How to Get Away With Murder will be the first episode to air since she won the SAG Award for Outstanding Performance by a Female Actor in a Drama Series earlier this week.

TIME spoke with Davis earlier this year about her hacker-thriller Blackhat, but we couldn’t get away with not asking her about what makes her hit TV show so groundbreaking.

TIME: This show has been praised for changing the way we see sex on television. How does that feel?
Viola Davis: Oh, I love it! As an actor, I try to draw from life because life is my biggest inspiration. It’s so full of contradictions. When you draw from life, that’s when you get the biggest a-ha moments, because who people are in their private lives are sometimes not ever reflected on TV and film. The biggest a-ha moment was when I was given a role that’s described as sexy, strong, and I decided to look like a real woman—not kind of the prototypical sexy woman that you usually see on television. I wanted to be that sexy woman who took her mask off at night, the sexy woman who was not a size two, the sexy woman who looked like me and walked like me and had my skin tone. I thought that’s probably the most progressive decision that I’ve made, and I’m so happy that people have acknowledged it and are tuning in.

What do viewers not understand about what it’s like actually filming those scenes?
The fact that they’re uncomfortable—and they should be uncomfortable. Ultimately, you’re being private in public. How many people have a camera in their bedroom at night? The reason that we can do what we do in private is because we know we’re not being watched. On TV, you’re being watched. It’s one of the biggest lessons you learn when you are in acting school: how to be uninhibited. That’s what people don’t understand, and that’s why I wanted to take my wig off, my makeup off. I felt like that would be the ultimate courageous thing that I could possibly do. Most of the time when I’m watching TV, I feel there’s some awareness by the artist and the people making TV that they’re being watched. I wanted to do it with the understanding that I’m not being watched. I felt that would be the most progressive decision I could make, and obviously it was.

Empire drew almost 10 million viewers when it premiered, a number that both How to Get Away With Murder and Black-ish previously hit. With black actors leading so many breakouts shows, is this the tipping point for minority casting opportunities?
I hope so. I’m going to believe that it is because America is changing. I don’t think you can even look at a bus stop nowadays without seeing a caucasian blond woman with her afro’d brown-skinned baby. Art needs to begin to reflect life. It can no longer be homogenized. We are now in the 21st century. I’m going to believe this is the landscape of television now. I’m going to believe that people are going to be tuned into it. It’s just not just black actors or black-themed storylines, it’s just human-being storylines with people of color in them. I think it’s here to stay.

What’s the most surprising thing you’ve learned about the law after working on this show?
That it’s not just black and white and right or wrong. It’s something that I think my character says at one point: “You have to defend people who you know are guilty.” That’s the surprising thing about criminal defense attorneys. You have to lie to yourself. That’s the justice system. That’s the bottom line. I understand that when people tune in they want to see characters that are likeable, they want to see right or wrong, they want to see black or white, but life in the law is very, very, very grey. Everybody deserves a fair and equal trial, even the people who are on the wrong side. That’s the system that we’ve created. That’s the most surprising element—the real complexities of it. And the real complexities of people within the justice system and people who are in life, too. At the end of the day, the lawyer hangs up the lawyer hat and they become a person. And they’re messy!

Do you think you would have been a good lawyer if you hadn’t become an actress?
No, I would have made a horrific lawyer.

Why?
I’m way too sensitive!

So you’re saying you can’t get away with murder now?
Definitely not. I’m one of those people that has a really horrific poker face. I’m a person who, if I find $5 on the street, I’m going to run around for the next 20 minutes trying to find the person who owns the five dollars—and I’ll keep it for the next two years to see if anyone shows up to claim it. That’s me!

What can you tease about the show’s return?
I think that it will surprise you in simple ways. I think it will be touching in unusual ways. And I think it will still be salacious and intriguing. And look out for Miss Tyson—look out for the force that is Miss Cecily Tyson. 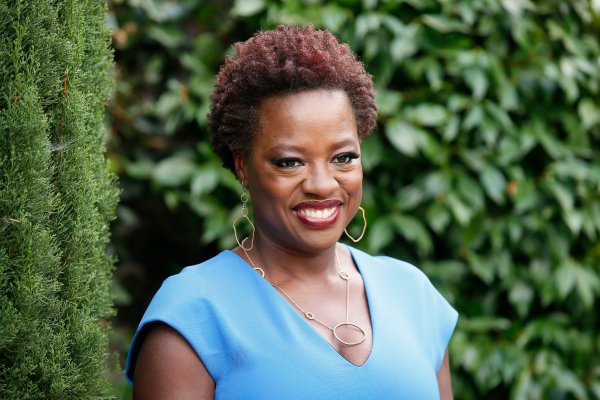 Viola Davis: 'The Opportunities in Film are Still Few and Far Between'
Next Up: Editor's Pick