Three Sundays ago in Franklin, Tenn., twenty minutes south of Nashville and in the heart of the country’s contemporary Christian music industry, pastor Stan Mitchell of GracePointe Church preached what was perhaps the most important sermon of his life. You can watch it above–start around 44:40 if you are short on time.

For the past three years, GracePointe has engaged itself in a time of listening on the topic of sexual orientation and identity. It began around the time that the country star Carrie Underwood, who goes to GracePointe, spoke out in favor of marriage equality in 2012, and the Westboro Baptist picketers showed up the church.

That was a time when, as Mitchell, 46, explains, the position of the church on marriage was classically evangelical. People who were not heterosexual could be members, but they could not serve on the board, lead worship or other church groups. They could be baptized and receive communion, but they could not be married or have their children dedicated.

For congregants on all sides of the debate, the conversation over the past three years has been at times painful, even devastating. For Mitchell, it has been a deeply personal as well as a spiritual journey, especially as he has seen it divide friends and family. And on Sunday, Jan. 11, the church reached a conclusion, as Mitchell shared:

“Our position that these siblings of ours, other than heterosexual, our position that these our siblings cannot have the full privileges of membership, but only partial membership, has changed,” he said, as many in the congregation stood to their feet in applause, and other sat in silence. “Full privileges are extended now to you with the same expectations of faithfulness, sobriety, holiness, wholeness, fidelity, godliness, skill, and willingness. That is expected of all. Full membership means being able to serve in leadership and give all of your gifts and to receive all the sacraments; not only communion and baptism, but child dedication and marriage.”

With those words, GracePointe became one of the first evangelical megachurches in the country to openly stand for full equality and inclusion of the LGBTQ community, along with EastLake Community Church near Seattle. The results of the conversation, he told his congregation, were not unanimous or exhaustive, but they were sufficient.

“I implore you, whether you ever worship here again, or whether you come back next week happier than you’ve ever been, when all else fails, and love never fails, you are mine and I am yours, and inclusion means that we can live together in agreement and disagreement,” he said. “But if this stretches you to the point of having to compromise your soul, and you do need to separate, I would be a hypocrite to say I do not understand that, because conversely, my soul has been stretched to the point that if I do not say what I say today, I cannot be here any longer.”

The way that Mitchell explains the shift is almost as significant as the move itself. Marriage equality was not the starting point of his sermon. For 45 minutes, the pastor explored a story from the gospel of Luke when, after Jesus’ death, two of his disciples are traveling on the road to Emmaus and meet a resurrected Jesus, but do not realize it is him. The disciples then tell Jesus the story of Jesus’ own crucifixion. Jesus responds by telling them the entire Scriptures, but even then they still don’t realize who he is. The story climaxes when the disciples finally have a moment of Epiphany, a term for divine revelation, when they are breaking bread with Jesus.

Mitchell used this story in his sermon to point out that faithful people can know Scripture deeply, and even be staring at Jesus, and still not understand what the word of God is saying. “Even the presence of God and a Bible in your lap doesn’t give an epiphany,” he told his congregation. “You do not look full in the face of Jesus when you are reading the text or looking at the sunrise, but if though the sunrise and through the text you are compelled to read and look up, see and look up, … if you don’t look up, even Jesus can read the Bible to you and you won’t see him.”

This passage from Luke is not the typical Biblical text that evangelicals use when talking about understanding sexuality. Usually the Apostle Paul’s condemnation of homosexuality, not the gospel stories of Jesus himself, are the trump card. But Mitchell’s is a Biblical argument, one that seeks to take seriously the meaning of Jesus’ message and understand it as a living, dynamic way.

Evangelical opponents of marriage equality don’t see it this way. After TIME published a feature on the national scope of this evangelical shift, some opponents claimed that evangelicals who are now openly welcoming to LGBTQ congregants no longer uphold the Bible’s teachings. The Family Research Council’s vice president Rob Schwarzwalder wrote, “Those professed Evangelicals who are willing to jettison the Bible’s teaching regarding homosexuality can no longer claim to be persons of the Gospel–Evangelicals.” Boyce College Biblical Studies professor Denny Burk blogged, “Can they in any meaningful sense be considered bellwethers for a movement defined by convictions that they have largely abandoned? I don’t think so.”

But churches that are shifting, like GracePointe and EastLake, are not only retaining their faith, they are also using their very evangelical roots to come to these new decisions. There are four hallmarks of evangelicalism, according to the historian David Bebbington–Biblicism, a high view of Scriptural authority; crucicentrism, a focus on the sacrifice of Jesus; activism, living out this gospel message; and conversionism, transforming their own lives.

Mitchell’s sermon pays tribute to all four of these, especially in his very high view of Scripture. It’s clear that GracePointe’s shift rests on study of and belief in the Bible. Mitchell’s interpretive methods rely heavily on textual analysis and even ancient word translation, two traditional elements of evangelical preaching. It may be a different reading of Scripture than evangelicals like Burk or Schwarzwalder or even Southern Baptists like Russell Moore use to shape their ethical outlook, but its evangelical core is hard to ignore. “Who has the copyright on the word evangelical?” Mitchell tells TIME. “I didn’t know there was a papacy on this.”

GracePointe’s move is not without concrete consequences. January giving usually is about $100,000–so far this month the church has brought in an estimated $52,000. When GracePointe began the listening process in 2012, Sunday attendance averaged 800-1000. The Sunday he preached the inclusion sermon, attendance was 673, and two weeks later, it was down to 482. “It’s a gut punch,” Mitchell says. “I know a year from now, I’m going to feel a whole lot better, but right now it is just hard.”

For now, spiritual and Biblical convictions are pushing GracePointe and its pastor forward. Pastors are coming to him quietly and undercover from all over town, he says, to talk with him about how to have this conversion in their own evangelical churches. And, while a three-year conversation is ending, another one is just beginning. “Could you be a church in Selma and not march, just handle your own community?” Mitchell asks. “I don’t think I can do that. We are on the front edge of a movement that means so much.”

Read next: How Evangelicals Are Changing Their Minds on Gay Marriage 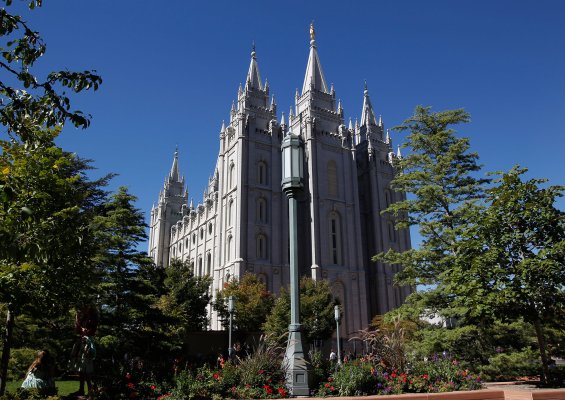