Menopause, like puberty, is a reproductive rite of passage, and marks for women the end of their fertility and child-bearing years. But studies show that it’s not just age that can determine when menopause starts — exposure to certain chemicals and pollutants can also play a role.

In one of the most comprehensive looks at possible menopause-disruptors to date, researchers led by Dr. Amber Cooper, from the department of obstetrics and gynecology at Washington University in St. Louis, report in the journal PLOS ONE that such exposure can push menopause up by as much as four years.

Cooper and her team studied 31,575 women enrolled in the National Health and Nutrition Examination Survey conducted by the government. Every two years, the women were surveyed about various health and nutrition issues, including whether they had begun menopause. At some point between 1999 and 2008, each of the participants also provided at least one blood and urine sample which the scientists analyzed for the presence of various chemicals, including dioxins contained in pesticides, phthalates found in fragrance, plastics, cosmetics and hair spray, plant-derived estrogens, and polychlorinated biphenyls, among others. The researchers found that women with the highest levels of 111 of these chemicals on average had menopause anywhere from 1.9 years to 3.8 years earlier than those with lower levels.

How could Cooper be so certain that the exposure was linked to the early menopause? She and her team conducted other analyses, including one of women closer to menopause, between the ages of 45 and 55 years, and found a similar association. They also found that it wasn’t just exposure, but increasing exposure over time that was also connected to problems with ovarian function, another potential consequence of the chemicals on reproductive health. And when they looked at all of the women in the survey from age 30 years on, those with the highest blood and urine measurements were six times more likely to be menopausal than women with lower readings.

“This is the tip of the iceberg,” says Cooper, who stresses that the results don’t prove that exposure to these chemicals causes early menopause, only that the two might be connected somehow. ”We need more longitudinal studies to better understand each of these chemicals.”

Previous studies have linked certain chemicals to disruptions in the reproductive hormones, including estrogen, which can then have unhealthy effects on the heart and bone.

What’s concerning is the fact that with the majority of the chemicals, there isn’t much women can do to reduce their exposure. That’s because each of the compounds have different half lives, or time in which they can linger before completely breaking down. While PCBs have been banned in the U.S. since the 1970s, for example, their long half lives mean people may still be exposed to them in the soil, air and water, and in through animals or other things that have contact with them. Women can try to reduce their exposure to some of these chemicals by using products that do not contain synthetic fragrance—which is listed as “fragrance” or “parfum” and which contains phthalates. Women can also opt for organic beauty products, which would not contain pesticide residues and a number of other chemicals.

Cooper advises her patients to be more aware of their potential sources of exposure, including plastics in food packaging, and perhaps try microwaving only in glass and paper containers. “My goal is not to scare women, but raise awareness and promote future research,” she says. 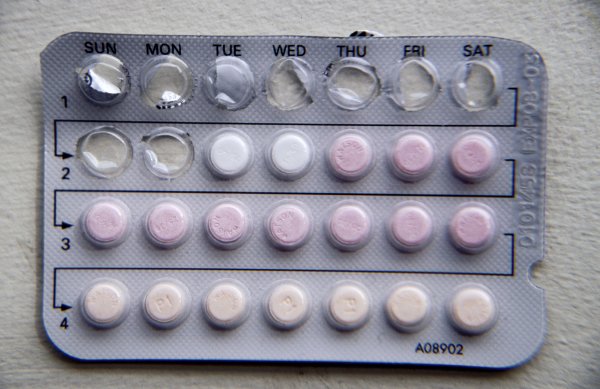 Birth Control Pill Risks May Now Include Brain Cancer
Next Up: Editor's Pick