According to his prepared remarks, Romney, who said earlier this month he is “seriously considering” another White House bid, will seek to tie the former Secretary of State’s record to that of President Barack Obama, who defeated him in the 2012 election. Romney laid out a three-pronged message for a potential candidacy in an address to the Republican National Committee in San Diego, but it largely focused on Obama, not his would-be Democratic rival.

“Secretary of State Hillary Clinton cluelessly pressed a reset button for Russia, which smiled and then invaded Ukraine, a sovereign nation,” Romney is to say. “The Middle East and much of North Africa is in chaos. China grows more assertive and builds a navy that will be larger than ours in five years. We shrink our nuclear capabilities as Russia upgrades theirs.”

Romney will also reference Clinton’s comments last year in a stump speech for Democratic Massachusetts gubernatorial candidate Martha Coakley that “don’t let anybody tell you that it’s corporations and businesses that create jobs.”

“How can Secretary Clinton provide opportunity for all if she doesn’t know where jobs come from in the first place?” Romney will say.

Clinton aides later said she had misspoken and meant to refer to tax breaks for businesses, but the line is sure to be a potent GOP attack in the coming campaign.

Romney is also set to restate his new focus on raising people out of poverty, a policy area on which his 2008 and 2012 campaigns were largely silent.

The former Massachusetts governor has been calling donors as he works to retain his political network should he decide to mount a third White House bid. But he faces new challenges this cycle, including a crowded field of qualified candidates and his self-inflicted wounds from the 2012 cycle. Many Republicans have openly expressed their preference that Romney step aside to allow a new generation of leaders to step up.

Democratic National Committee Communications Director Mo Elleithee responded to Romney’s attack on Clinton Wednesday afternoon in a statement. “We don’t really need to hear a lecture on ‘where jobs come from’ from a guy who’s best known for bankrupting companies and profiting off of outsourcing,” he said. “Under this Administration, we just saw the strongest year for job growth since the 1990s, and we’ve created 11 million private sector jobs. I don’t know if Mitt Romney thinks 47% of those folks are ‘takers,’ but I am sure he’s not the right guy to talk about expanding opportunity.”

Excerpts of Romney’s remarks as prepared for delivery are below: 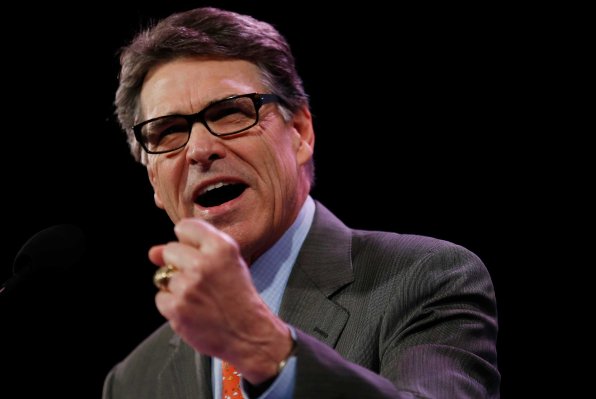 Perry Forges Ahead Despite Indictment
Next Up: Editor's Pick