When Princess Elizabeth Became Queen, She Didn't Even Know

Being crowned Queen of England may have been one of the most thrilling moments of Elizabeth II’s life, but at the exact moment of her accession, she was unaware that her royal status had changed. She was, as TIME reported shortly after the event, in a Kenyan tree hut, experiencing another thrilling moment: watching a herd of elephants gather at a watering hole.

Although King George VI died in his sleep sometime during the night of Feb. 5, 1952, the remoteness of her tree house lodgings meant that Elizabeth didn’t learn until relatively late the next day that she had become Queen of the United Kingdom, Canada, Australia, New Zealand, South Africa, Pakistan and what was then called Ceylon (today’s Sri Lanka).

George’s failing health over the previous year — he had recently undergone surgery to remove a malignant tumor in his lung — had meant delegating more and more of his royal duties to Elizabeth. When he died, she was on her way to represent him on a diplomatic visit to Australia and New Zealand, stopping first in Kenya to stay in the lodge that had been a wedding present from the Kenyan people when she married Prince Philip five years earlier.

She and Philip spent a night away from the lodge at the Treetops Hotel in Kenya’s Aberdare National Park, where, after seeing the elephants, she was too excited to sleep, as TIME reported, and “kept leaving her cot to watch other nocturnal visitors at the waterhole.”

In the morning, per TIME, “she breakfasted on bacon and eggs, and tossed bananas to baboons below.” It wasn’t until early afternoon that a reporter from a local newspaper called and told Philip that King George had died.

Back in London, church bells tolled, Union Jacks flew at half-staff, shops and factories closed for the day, and the BBC stopped broadcasting after airing an announcement of the King’s death. Crowds of people stood in the cold rain for hours outside Buckingham Palace. Meanwhile, Philip led Elizabeth on a walk along the river, in the shadow of Mount Kenya, and broke the news of her father’s death.

It was an immense personal tragedy for the 25-year-old, but it required her to step immediately into a demanding political role, filling the void her father had left. She cut her trip short and spent the rest of the day planning her return to London and sending letters of apology to the dignitaries who were expecting to host her in Australia and New Zealand.

Although she knew what was expected of her as England’s new ruler, she was clearly caught off guard by the timing. Just that morning, she’d been “talking about her father, and proudly describing how bravely he’d stood up to his illness,” according to a BBC reporter.

She’d left the treetop hut “in high spirits over her ‘tremendous experience,’ and vowed to come again soon with her father,” according to TIME, “‘He’d love it,’ she said.”

Read the full cover story about from 1952, here in the TIME Vault: Elizabeth II 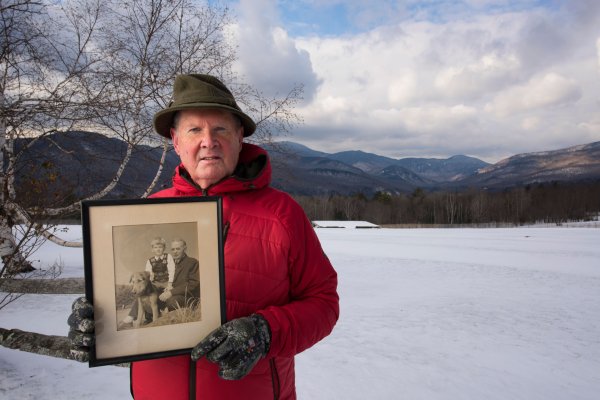 Revisiting the Real von Trapps as 'The Sound of Music' Turns 50
Next Up: Editor's Pick