Why the Big Blizzard Fizzled in New York

Mother Nature took a huge swing at New York City and missed by miles. And while the Blizzard of 2015 turned into the Fizzard of 2015 for the Big Apple, just up the coast, Providence and Boston got walloped as scheduled. Beantown conspiracy theorists are wondering: Did this blizzard get bribed?

Not quite, it just got shoved a few miles to the east at the last minute, which changes everything as storms move up the Atlantic coast. That more easterly track is exactly what computer models had been predicting until three days before storm hit—but a critical shift by one model moved the storm track a little more to the west, which triggered the snowpocalyptic forecast. “Before that, the models all took the storm out to sea,” says Joel Gratz, a meteorologist and CEO of Open Snow, which makes detailed snow forecasts for skiers. “That is a something to be cautious about when they pick something out so late in the game.”

The National Weather Service (NWS), on the other hand, kept jacking up the forecast totals even as the models were giving a broad range of snowfall, from six inches to three feet. “NWS’s adjustments were all in the ‘more severe’ category, says Ryan Maue, a research meteorologist at the private firm WeatherBEL. “That’s an ominous signal that suggested NWS had a high-level of confidence in their forecast. However, it was clear at the time that the exact opposite was true—this was a low-confidence solution, meaning the chance of a 30-inch snowfall occurring in NYC required everything to ‘go right’ for the blizzard’s track, intensity, and motion.” Private forecasters, including the Weather Channel, might have been skeptical about the 30-inch forecast, says Maue, but they don’t want to risk sending a mixed message that confuses the public about what to do.

There was never any doubt that New England was going to get nailed, but that was the easier part of the forecast—a lock, says Gratz. It’s the back edge of a storm that carries the most uncertainty. That left forecasters with a bit of a conundrum: follow the models and predict a dire and dangerous storm, or back off a bit, which might lead both officials and civilians to let down their guard at the wrong time.

Officials reacted to the fear factor. And, as Maue points out, the NWS absolutely nailed the last catastrophic storm, Hurricane Sandy, which caught some government agencies off guard. So in New York, hundreds of flights were canceled, mass transit shut down, stores closed and people loaded up on necessities, some in a panic state, in anticipation of not going anywhere for a couple of days. But the snow machine turned off at about 10 p.m. Monday night. Central Park ended up with about six inches of snow by Tuesday morning. The NWS’s Gary Szatkoski felt compelled to tweet an apology. “My deepest apologies to many key decision makers and so many members of the general public,” he said. “You made a lot of tough decisions expecting us to get it right, and we didn’t. Once again, I’m sorry.”

If weather is difficult to predict, precipitation is harder and snow even more difficult. The reason is that forecasters not only have to get the storm track right, they also have to nail the temperature, since the temperature influences how snow crystals form, which in turn determines how much snow falls. It’s compounding complexity and Atlantic winter storms have shown no discernible pattern over the decades.

Gratz does admit that there’s another possible reason behind the blown forecasts. When meteorologists see a big storm brewing they get a little too excited about it and want to share their knowledge and forecasting chops. 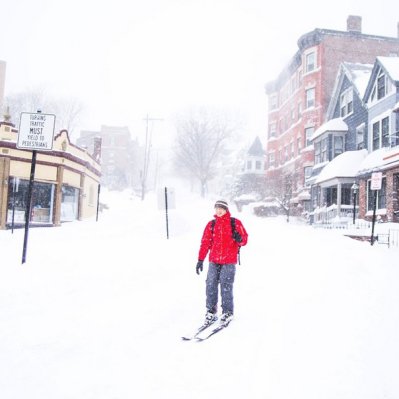