The Salt Lake Temple is seen during the 184th Semiannual General Conference of the Church of Jesus Christ of Latter-Day Saints on Oct. 4, 2014 in Salt Lake City, Utah.
George Frey—Getty Images
By Elizabeth Dias

The Mormon church is revving up its efforts to protect both religious freedom and LGBT rights in the United States.

The Church of Jesus Christ of Latter-day Saints announced Tuesday that it would support legislation to provide LGBT protections in housing, employment and other policy areas, as long as it also protects religious freedom. The move is a proactive step on the part of the Church to address the growing polarization and competing interests between religious freedom advocates and LGBT advocates.

It is unusual for Church leaders to make so public a statement, especially with so strong a lineup of speakers. Three members of the leadership group The Quorum of the Twelve Apostles spoke at Tuesday’s news conference—Elders Dallin H. Oaks, Jeffrey R. Holland, and D. Todd Christofferson—as well as Sister Neill F. Marriott of the Church’s Young Women general presidency.

“This nation is engaged in a great debate about marriage, family, individual conscience and collective rights and the place of religious freedom in our society,” Marriott said. “The debate we speak of today is about how to affirm rights for some without taking away from the rights of others.”

While the announcement is rare, it is not surprising. Mormon leaders have had dozens of conversations over the past few years on this topic, according to a Church spokesperson—with LGBT advocates, government officials, and other religious leaders. Those conversations have continued since 2009, when the Church came out in favor of Salt Lake City ordinances that aimed to protect LGBT residents from housing and employment discrimination.

Tuesday’s announcement comes as the Utah Legislature is considering competing bills on this very divide. One measure would bar housing and employment discrimination against LGBT people in Utah. The other would protect an individual’s right to deny services, including performing marriages, based on religious beliefs. Legislatures around the country are also beginning new sessions, and religious freedom bills have been cropping up across the country, from Michigan to Texas to North Carolina.

Looming over the entire debate is the reality that the U.S. Supreme Court will hear landmark marriage equality cases in April, to be decided upon in June. Marriage was not on the table in the Church’s announcement Tuesday—and no church doctrine or teaching is changing—but the move instead signals a new strategy amid the heated national debate over when religious freedom becomes the right to discriminate, especially in matters of human sexuality.

The big question for many religious conservatives is where that line will be drawn, and ensuring that they can continue to practice their religious convictions as laws to protect LGBT rights expand. The practicalities of that debate are on Mormon leaders’ minds.

“For example, a Latter-day Saint physician who objects to performing abortions or artificial insemination for a lesbian couple should not be forced against his or her conscience to do so, especially when others are readily available to perform that function,” Elder Holland said. “As another example, a neighborhood Catholic pharmacist, who declines to carry the ‘morning after’ pill when large pharmacy chains readily offer that item, should likewise not be pressured into violating his or her conscience by bullying or boycotting.”

Ensuring such religious freedom protections in the midst of increasing laws to protect LGBT rights is a growing concern not just for the LDS Church, but for many other Christian communities. It is prompting increased collaboration between Catholics, evangelicals, and Mormons to stand for religious freedom. Last week, Archbishop Charles Chaput of Philadelphia, who is hosting Pope Francis for the World Meeting of Families in September, spoke about the urgency of this new partnership at Brigham Young University. “The differences in our doctrine and practice are obvious,” Chaput said. “But that doesn’t preclude friendship. … And it doesn’t obscure the fact that we face many of the same problems and share many of the same convictions about marriage and family, the nature of our sexuality, the sanctity of human life and the urgency of religious freedom.”

Accommodating the rights of all citizens, the Mormon leaders said, means taking seriously the rights of religious minorities. In the United States, less than 2% of the population is Mormon, according to the Pew Research Center.

“When religious people are publicly intimidated, retaliated against, forced from employment or made to suffer personal loss because they have raised their voice in the public square, donated to a cause or participated in an election, our democracy is the loser,” Oaks said. “Such tactics are every bit as wrong as denying access to employment, housing or public services because of race or gender. … It is one of today’s great ironies that some people who have fought so hard for LGBT rights now try to deny the rights of others to disagree with their public policy proposals.” 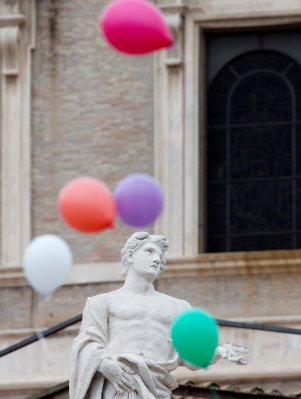 Pope Francis Trades Doves for Balloons
Next Up: Editor's Pick