Ready for its close-up: Ceres as you never saw it
JPL/NASA
By Michael D. Lemonick

NASA’s Dawn space probe, which dazzled scientists with its astonishing views of the asteroid Vesta back in 2012, is about to do it again. A little over five weeks from now, the 2.7 ton probe will go into orbit around Ceres—another asteroid-belt object that is so huge, at 590 miles (940 km) across, it was promoted from asteroid to “dwarf planet” at the same time Pluto was being demoted into the same category.

Ceres is also among the strangest objects in the Solar System: unlike most asteroids, which are largely made of rock, this one contains at least 20 percent water, and may even feature geysers, like Saturn’s moon Enceladus. It is, says, Michael Küppers, of the European Space Agency “a very peculiar beast of an asteroid.”

What that beast looks like in detail will have to wait, but with Dawn just 147,000 miles (274,000 km) away from its target—closer than the Moon is to the Earth—NASA has just released the best image of Ceres ever seen. It’s 30 percent sharper than what Hubble can do, even though the Dawn cameras aren’t designed to do their best imaging from this far away.

“We’re seeing things that look like they could be craters,” says Mark Sykes, a Dawn co-investigator from the nonprofit Planetary Science Institute, “We’re also seeing these extended, kind of ribbonlike structures, which could be evidence of the kinds of internal processes you see on larger planets.”

The new images also confirm the existence of a mysterious white spot in the north that was seen in earlier images. (It’s actually very dark—nearly as black as coal, says Sykes, although not as dark as the rest of Ceres; the images are deliberately optically stretched to enhance contrast so surface features will show up). It’s almost certainly not ice, Sykes says: even dirty ice would have vaporized over the ten years since the spot first showed up in Hubble images.

But it could in theory be mineral deposits from under the surface. “If water is gushing out at times, it should leave a signature behind,” Sykes says. Light-colored deposits would darken over time, though, so if that’s what it is, it has to be relatively recent. The answer to this and other questions about Ceres’ structure, surface features and composition won’t come until after Dawn goes into orbit to begin its mission in earnest on March 6.

Astute space cadets might wonder how it could possibly take Dawn five more weeks to travel less than 150,000 miles to its rendezvous with Ceres; after all, the Apollo astronauts rocketed all the way to the Moon, 239,000 miles (384,000 km) from Earth in just three days. The answer is that Dawn was designed from the start to be a super slow spacecraft. Rather than relying on traditional chemical rockets once in space, it uses ion propulsion. The technology is well known to sci-fi fans. In fact, says Marc Rayman, Dawn’s mission director and chief engineer, “I first heard of it on Star Trek, when Captain Kirk says ‘advanced ion propulsion is even beyond our capabilities.'”

Evidently not, though. The idea, first tested on the Deep Space 1 mission back in the 1990’s, is to use electromagnetic fields to shoot charged particles out the back of a spacecraft (in this case, ionized xenon atoms), thrusting the craft itself forward. The acceleration, is much more modest than with a rocket engine. “It’s very gentle,” says Rayman. “It pushes on the spacecraft as hard as a sheet of paper you’re holding pushes down on your hand.” But because ion engines are so efficient, it can maintain that acceleration for far longer.

Once Dawn arrives at Ceres, it will orbit the dwarf planet at an altitude of about 8,000 miles (12,900 km) to start with, then descend to under 3,000 (4,800 km). Ultimately, the probe will image Ceres from less than 250 miles (402 km) up, taking not only photos but also scientific measurements that should finally lay bare the secrets of this most un-asteroidlike body.

Unlike other orbiting probes, however, including Deep Impact, LCROSS and MESSENGER, which visited a comet, the Moon and Mercury, respectively, Dawn won’t be sent in for a crash landing when the mission is over in 2016. “We know Ceres has water,” says Christopher Russell of UCLA, Dawn’s chief scientist. “We don’t know if it has life, but if it does, and if we contaminate the surface, we might mess it up.”

Even as Dawn inches toward Ceres, meanwhile, NASA’s New Horizons probe is speeding at thousands of miles per hour toward its own close encounter with Pluto next July. By mid-May, New Horizons, too, will have taken images of its target that surpass the Hubble. And by early next summer, scientists will be happily drowning in images and data from not one but two dwarf planets—both of which will be revealing their secrets at last. 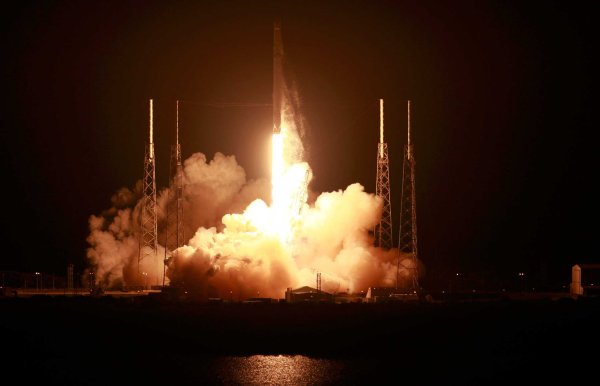 SpaceX, Boeing on Track to Visit ISS by 2017
Next Up: Editor's Pick