Sarah Palin and Donald Trump Are Not Running for President

Anyone can say they are running for President. Just ask Sarah Palin and Donald Trump.

“I have that fire in my belly,” Palin told Fox News. “That’s sort of my problem.” Trump was not far behind. “I can tell you this,” he told a crowd of conservative activists. “If I run and if I win, this country will be respected again.”

Both reality television stars spoke those words in 2011, in what proved to be low-cost feints designed to drum up national attention and raise their profiles before the last presidential campaign. Now they are at it again, with what appears to be a nearly identical playbook. In Iowa over the weekend, both described the same unquantifiable assertion of mental effort—”seriously considering”—to characterize their relationship to becoming a candidate in the 2016 presidential election.

There is no evidence that either is any more serious about an actual campaign this time—no fundraising, no staff hires, no grassroots organizing in early states. But both have the same incentives to make the nation, and the political press corps, think differently. And the political press corps, struggling at the moment to interest a nation exhausted with politics in another 20-month campaign, has an incentive to write about Palin and Trump, who truth be told are simply more fun than actual presidential candidates.

A large part of this delight springs from both non-candidates disdain for the political scribblers they court. Trump is well known for personally attacking reporters who doubt his sincerity with school-yard epithets like “loser.” And Palin has increasingly reordered her political worldview around the concept of a “lamestream” media that seeks to undermine the nation, and the decent, God-fearing people who occupy it.

On Saturday, Palin held up an old copy of TIME magazine that carried a cover line “Can Anybody Stop Hillary?,” before interpreting this deliberation on the Democratic nomination fight as an effort to undermine national pride. “The press asks, ‘Can anyone stop Hillary?’ ” she said. “This is to forego a conclusion, right, is to scare us off and convince us that a pantsuit can crush patriots?”

Between the two of them, however, Trump has a far more storied history of propping up and then pulling the football away from political watchers anticipating his candidacy. “I know what needs to be done to make America great again,” Trump said at the Iowa Freedom Summit on Saturday, in a speech that also promoted a new Trump-branded hotel being built near the White House. Those words borrowed verbatim from speeches he gave before the 2012 campaign. Indeed, the most remarkable thing about Trump is how consistent his messaging has been since he first started flirting with running for President in the 1980s. In 1987, Trump took out full-page ads in several newspapers criticizing the political establishment for its handling of gulf oil states and Japan, stoking speculation that he might join the fray. In 2000, he made moves to win the Reform Party ticket with the same talking points.

If his message has been repetitive, Trump’s policy solutions have varied wildly. In a book that preceded his 2000 non-campaign, he embraced the ides of single-payer healthcare and a one-time 14.25% net worth tax on all Americans worth more than $10 million, two ideas that would horrify most of the people cheering for him in Iowa. (The tax would have exempted net-worth held in primary residences, effectively making Trump’s real estate empire for the wealthy into a new, massive tax shelter.) He has since said he no longer supported either plan.

The timing of Trump’s 2011 campaign tease raised his national profile just as he was finalizing negotiations with NBC News on a new contract for the Celebrity Apprentice. (“I have a big decision to make,” he would say then, of the choice between seeking the Oval Office and evaluating the half-naked selfies of Geraldo Rivera.) Palin launched a multi-state bus tour—she even had the bus wrapped with her mug and signature—raising her profile as a pundit in advance of the campaign. She now sells online subscriptions to her own video network, giving her financial incentive for her publicity even more direct than a book tour.

Just how far Palin and Trump choose go this time down the campaign trail is not possible to predict, though their odds of winning the Republican nomination can be safely handicapped as far more aspirational than practical. Perhaps they might go all the way to a debate stage, if only to prove the skepticism of political reporters wrong. After all, they both have so little to lose, and so much to gain. 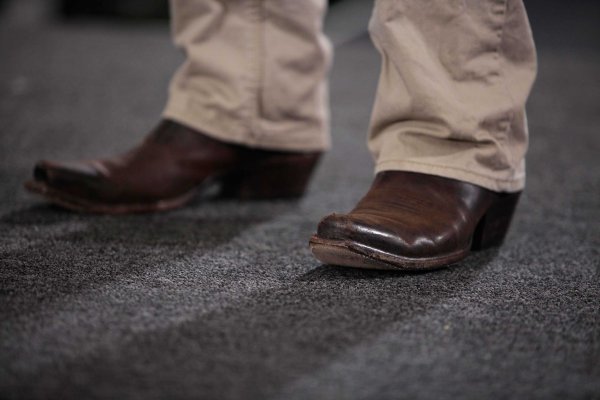 Why Republicans Run in Cowboy Boots
Next Up: Editor's Pick