Sam Smith’s “Stay with Me” was one of the biggest hits of 2014. So big that Tom Petty heard the tune and noticed something: it was substantially similar to his 1989 classic “I Won’t Back Down”.

Petty’s lawyers approached Smith’s team; Smith then agreed to give Petty and singer-composer Jeff Lynne (best known for his work in ELO) a 12.5% songwriting credit for influencing his song. According to a source who spoke to The Sun, “After it was pointed out to Sam’s camp, they didn’t try to fight it and amicably dished out royalties. It wasn’t a deliberate thing, musicians are just inspired by other artists and Sam and his team were quick to hold up their hand when it was officially flagged.”

Smith’s rep told Rolling Stone that “the likeness was a complete coincidence” and that though they were “not previously familiar with the 1989 Petty/Lynne song, the writers of ‘Stay With Me’ listened to ‘I Won’t Back Down’ and acknowledged the similarity” and “all involved came to an immediate and amicable agreement.”

According to The Sun, Smith and Petty actually settled out of court back in October, but details only emerged this weekend. The song’s credit on ASCAP has been amended to now include Petty and Lynne, along with Smith, William Phillips, and James Napier as the chief songwriters. Considering that “Stay with Me” has already sold six million copies, Petty and Lynne should expect a sizable sum from the deal— although, as Rolling Stone points out, it’s unclear whether Petty and Lynne were retroactively compensated or if they’ll only be entitled to future earnings for the songwriting credit.

Smith’s situation is not unusual. Songwriters are often “inspired” by other people’s music, frequently unconsciously — such as the famous example of the melody of George Harrison’s “My Sweet Lord,” which a court found was subconsciously copied from The Chiffons’ “He’s So Fine”. Artists ranging from Rihanna to Green Day and The Doors have all been accused of borrowing from other artists. (See 11 Suspiciously Sound-Alike Songs, here.) Petty himself has been accused by fans of borrowing lyrics from The Replacements after the band opened for him on tour.

However, it’s rare for an artist to admit to borrowing an idea like Smith seems to have done. To wit, the “Blurred Lines” copyright trial that pits Pharrell and Robin Thicke against Marvin Gaye’s family is set to begin next month, while Led Zeppelin is battling it out in court over similarities between “Stairway to Heaven” and Spirit’s “Taurus.”

Despite settling with Petty, Smith’s legal troubles haven’t come to an end. The singer is still embroiled in a lawsuit with Disclosure, who have been accused of stealing lyrics to some of their hit songs, including “Latch”.

Neither Smith’s nor Petty’s responded to a request for comment at time of publication.

Listen to the tracks below and see if you can spot the similarities:

Tom Petty and the Heartbreakers – “I Won’t Back Down”: 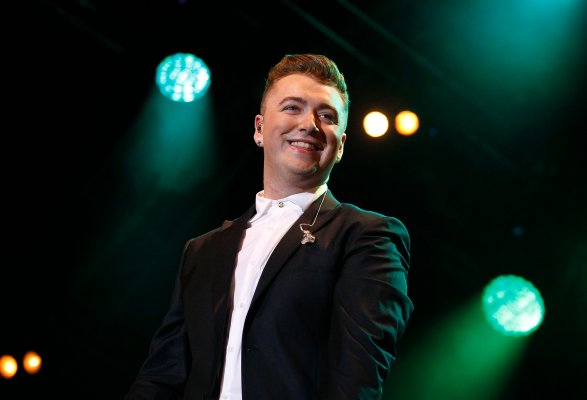 Treat Yourself to a Private Concert of Sam Smith Singing Beyoncé in the Shower
Next Up: Editor's Pick