A long awaited blizzard of potentially historic proportions began inundating the American northeast on Monday night — turning cities across the region into virtual ghost towns as residents hunkered down indoors.

As the first storm bands moved across the East Coast, snow fell at a rate of 2 to 4 inches an hour at times, according to CNN. Meanwhile, winds exceeding 70 mph lashed the New England coastline.

Cities from Pennsylvania to Maine prepared for snowfalls in excess of two feet. Airlines canceled thousands of flights, public-transportation systems wound down, governors declared states of emergency, and officials said they would institute far-reaching travel bans to keep people off the roads.

New York Governor Andrew Cuomo said subways and buses in New York City would stop running at 11 p.m. and warned that the situation would be “exponentially worse” by Tuesday morning. New York City Mayor Bill de Blasio ordered drivers to be off the roads by 11 p.m.

“This will most likely be one of the largest blizzards in the history of New York City,” de Blasio said.

Boston was bracing for the worst, expecting as much as three feet of snow, compared with about two feet in New York and more than a foot in Philadelphia. By early Monday evening more than 5,000 flights had been canceled in preparation for the storm, including all flights out of Boston Logan Airport starting as early as 7 p.m. Monday.

“This is a top-five historic storm, and we should treat it as such,” Massachusetts Governor Charlie Baker said. “This is clearly going to be a really big deal.”

The governors of Connecticut, Massachusetts, New Jersey and New York each declared states of emergency. Travel restrictions in each state were set to begin Monday evening, when the heaviest snowfall was expected to start.

MORE: Here’s Who Decides if Your Flight Takes Off This Week

The National Weather Service described the storm as “crippling and potentially historic,” and warned of “life-threatening conditions” on roadways. Officials from New York to Boston warned residents to remain indoors if possible.

In New York City, thousands of city workers scrambled to prepare 6,000 miles of roads to operate during the storm. The Metropolitan Transportation Authority said that travel would be “hazardous” on Monday and Tuesday, and commuter-rail lines were expected to halt service overnight. Cuomo asked city residents to expedite their schedules to avoid evening delays.

All Broadway theater performances scheduled for Monday were canceled, according to an afternoon statement from Charlotte St. Martin, the executive director of the Broadway League.

In Massachusetts, Baker warned of power outages and a frozen transportation system in his state, where forecasters predicted winds of up to 75 m.p.h.

“People across Massachusetts should presume that roads … will be very hard, if not impossible, to navigate, that power outages are a distinct possibility, and that most forms of public transportation may not be available,” he said. 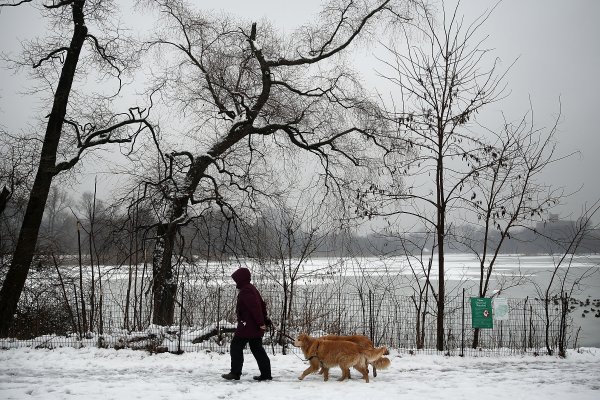 Blizzard to Bury Northeast
Next Up: Editor's Pick