Soldiers march in formation down the ceremonial boulevard Rajpath during the Republic Day parade in New Delhi on Jan. 26, 2015.
Prakash Singh—AFP/Getty Images
By Rishi Iyengar

Gloomy skies and a steady downpour were not enough to dampen New Delhi’s spirits on Monday, as thousands turned up to watch U.S. President Barack Obama, First Lady Michelle and a sizable American delegation witness a display of India’s military might, economic achievements and diversity at the country’s 66th Republic Day parade.

Obama became the first U.S. President ever to attend the annual event, an invite for which is considered one of the greatest honors India bestows on foreign dignitaries. The President rolled up to the viewing platform in his armored limousine, known as The Beast, eschewing the tradition of riding in the Indian president’s vehicle over security concerns. He then took his place between Indian Prime Minister Narendra Modi, with whom he announced a “breakthrough” on a civil nuclear deal Sunday evening, and Indian President Pranab Mukherjee (whose choice of headgear caused a bit of a flutter on social media).

While the U.S. has become India’s biggest military supplier in recent times, the South Asian nation’s armed forces have traditionally been equipped with Soviet hardware, a fact Obama was reminded of as Russian-made T-90 and T-72 tanks rolled down the main stretch, along with a mobile launcher for the BrahMos missile jointly developed by India and Russia.

The parade-ending flyovers by the Indian Air Force did have American P-8 Poseidon naval planes, and although these too were flanked by Russian MIG-29 and SU-30 fighter jets, officials on both sides expressed hope and confidence in the 10-year bilateral defense agreement that Obama and Modi renewed on Sunday.

“None of these things should be considered small in terms of just what it means for working together as two defense industrial bases and what we can share with each other,” Phillip Reiner, Obama’s top South Asia advisor, told the New York Times.

Between the displays of military might came a series of marches — including multiple all-female contingents and even a camel troop — followed by floats and dance performances representing various Indian states, as well as government initiatives like Modi’s “Make in India” and “Swacch Bharat” (Clean India) campaigns.

Finally, there were the motorcycles of the Border Security Force. Known as “Janbaz,” or Dare Devils, they showcased feats of amazing balance, focus and agility — all while tapping on laptops and dressed as peacocks and lotuses.

Judging by Obama’s reaction, one of his most animated during the course of the parade, they got the White House seal of approval. 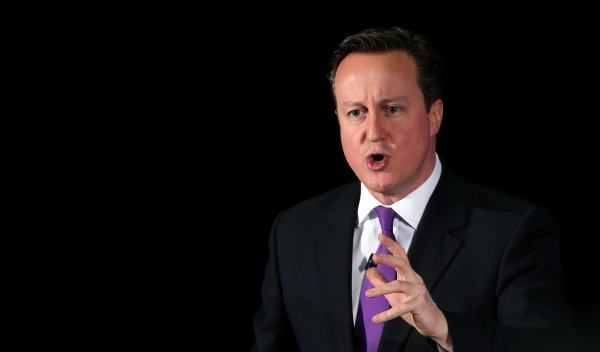 Prank Caller Gets Through to British Prime Minister
Next Up: Editor's Pick