New Jersey Governor Chris Christie brought a clear message to skeptical Iowa conservatives Saturday: We may not always agree, but you can work with me.

Christie spoke toward the end of a daylong 2016 presidential cattle call hosted by Iowa Representative Steve King, highlighting his fights with unions in his home state and his pro-life stance on abortion. Christie’s participation in the event turned heads, given King’s hard-line position on immigration and the audience’s more conservative bent. Jeb Bush and Mitt Romney both skipped the event on account of scheduling issues, and proved to be frequent targets on stage from other would-be candidates and activists.

Christie has spent years trying to reach across the aisle in preparation for a presidential run but has been dogged by questions whether he could win over the party’s base.

King used his introduction to boost Christie’s conservative credentials. “He vetoed the gay-marriage bill in New jersey,” he said. “He is pro-life.” Christie has since declared gay marriage a “settled” issue in his state after the state supreme court declined to stop same-sex unions in 2013.

Speaking calmly and slowly, Christie was self-effacing about “the blunt New Jersey stuff,” using it to introduce himself to Iowa voters with the story of his childhood.

He argued that if the party is looking for purity, “we will never win another national election. Ever.”

Reading off prepared remarks, Christie’s speech was an amalgamation of his notable addresses of the past several years, presenting the clearest preview of a full-fledged presidential stump speech.

“The next century does not have to be a Chinese century,” he said, calling for stronger American leadership overseas. “The world can’t do without a second American century.” His opposition to abortion was juxtaposed with his efforts in improving his state’s drug treatment programs to be “pro-life” at all stages of life.

He highlighted his electoral success in his blue home state, noting he won Hispanic voters and made inroads with black voters in his last election.

“We need a coalition that covers all parts of the country, all ethnicities, a coalition that is comprised at its core of our proud, yet underserved and underrepresented working class in this nation,” he said, in an implicit critique of former Republican nominee Mitt Romney’s 2012 campaign. He even alluded to growing income inequality, adding, “The rich are doing fine, that’s great. We don’t demonize the wealthy like so many folks in the Democratic Party, but nor should we cater to the wealthy at the expense of our middle-income workers and the working poor who are the backbone of every American community.”

Christie’s reception paled in comparison to Senator Ted Cruz, whose faith-themed address was red meat for the audience. But Christie accomplished what he sought out: demonstrating he is unafraid to appear before social conservatives and proving that he could even earn a standing ovation. In a crowded field where he will hope to have the support of the party’s establishment, that may be enough to go the distance. 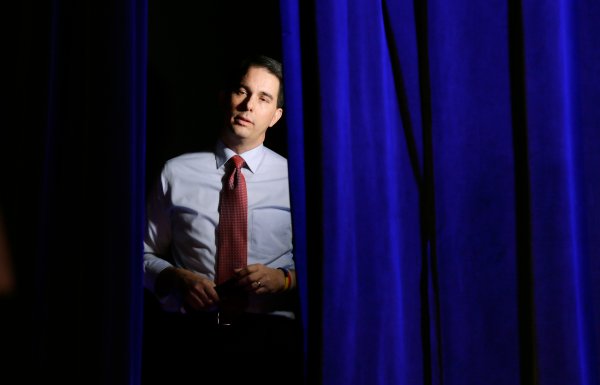 Walker Shows His Dark-Horse Strategy in Iowa
Next Up: Editor's Pick