HAVANA — The visit of the most senior U.S. official to Cuba in 38 years gave every appearance of doing what it aimed to, drawing the nominal enemies into a distinctly Caribbean embrace, complete with broad smiles, warm body language and actual language commodious enough that everyone could fit together for a group photo.

It was a simple dance, but required coordinated footwork, which both parties appeared to have practiced in private. The good feeling on display appeared to be partly genuine and partly a concerted effort to maintain the momentum that surged up suddenly on Dec. 19, the day President Obama and Cuban President Raul Castro simultaneously announced their intention to end a half century of what one U.S. diplomat termed “diplomatic estrangement” and, finally, re-establish formal ties. As formal talks proceed toward making the changes that the Cubans and Obama are free to make on their own—such as re-opening embassies in one another’s capitals, a primary topic in Havana on Thursday—officials of both governments privately acknowledge a secondary, over-arching intention. That would be to aim to sustain if not further swell the wave of public enthusiasm, leaving the U.S. Congress scant alternative but to repeal the 1960 Cuba Embargo Act that barred almost all exports to the emerging communist state.

Which made for some peculiar sights at the colorless Havana convention center where the delegations spent most of Wednesday and Thursday. Scores if not hundreds of journalists had gathered in the Hotel Palco waiting for something that has never happened in any previous U.S.-Cuba talks: a press briefing. Longtime Cuba watchers were gobsmacked by the spectacle of a room crowded with video cameras and reporters’ laptops. On the sidelines, senior Cuban officials smiled sheepishly. This was after all the land of the Central Committee communiqué, not to say diktats. “Usually,” said one senior official, “we don’t have a culture of informing the press.”

And yet, they proved pretty good at it—better than the Americans, on this day at least. Havana put forward youthful Josefina Vidal, head of the U.S. Division in the Foreign Ministry, and though she was never less than correct, she was also warm and apparently at ease. She spoke first in Spanish, then in English. The English was more direct: “It was a first meeting,” she said at one point, cutting what could have been four paragraphs into one. “This is a process. So we just made a list of things we have to do, when.”

By contrast, the top U.S. diplomat stood stock-still before the cameras, answered questions in detail, but betrayed not the merest hint she was happy to be here. Assistant Secretary of State for Western Hemispheric Affairs Roberta Jacobson appeared to recognize her most dangerous audience was the anti-Castro Lobby that for five decades had blocked the kind of rapprochement of which she has been made the face. It was as if she had the sense that the merest smile line would create traction for naysayers watching from Capitol Hill, calling it evidence democracy had been undermined.

The Cubans acknowledged the peculiarity of their side appearing more transparent than the Americans, but also signaled they understood why. The official offered an explanation on the relative powers of the U.S. system of government so often lost on Americans: “The power in the U.S. is not with the president,” the senior official observed. “It’s with a class. Don’t be fooled.”

And so, let the momentum go forward, from Havana to Miami and up the seaboard to Washington. After the Dec. 17 joint stunner, both governments moved with unusual dispatch—exchanging prisoners, papers, and statements of good will. President Obama took only a few days to re-write regulations that now allow Americans to fly to Havana without Washington’s permission—no great rush evident quite yet, but demand is clearly there—and opened previously closed gateways to electronics and other goods. “That’s what he’s allowed to do,” the senior Cuban official observed. Another executive action, Cuba’s place on the State Department’s list of states sponsoring terrorism, is already under review.

At the same time, in a sop to the Miami lobby, the American delegation conspicuously made good on Obama’s vow to continue to harp on Havana’s human rights record. On Friday morning, Jacobson had seven Cuban dissidents to breakfast at the splendid tropic compound that will once again be the ambassador’s residence if Washington and Havana re-establish formal diplomatic ties—the move perhaps most easily accomplished, despite the nations’ complex history. Prominent in the sculpted garden of the dining room was a broad wooden American Eagle said to be salvaged from the USS Maine, the destruction of which became the casus belli for the Spanish-American War.

The attention to human rights clearly irks the Cubans, who blame their government’s paranoia on a long and colorful history of U.S. intelligence operations aimed at bringing it down. But like both sides, they appear prepared to file the dispute under “profound disagreements” that can be addressed from embassies at least as well as Interests Sections, the cumbersome arrangement through which Cuban and American diplomats operate now in each other’s capitals, beneath the protection of the Swiss. No timetables were offered, but the next round, perhaps in DC, may address technical matters.

For the moment, the focus remains on keeping things clicking along toward a kind of “normality.” At a news conference at the residence on Friday, after the breakfast with dissidents, Jacobson thawed a good deal answering a question on the Embargo Act, projecting sympathy if not empathy for anyone trying to square Obama’s executive changes with persistent existence of that legislation.

But the Cubans have patience. “”It’s a good sign,” said one other senior official, smiling wryly. “We have nothing to lose.” 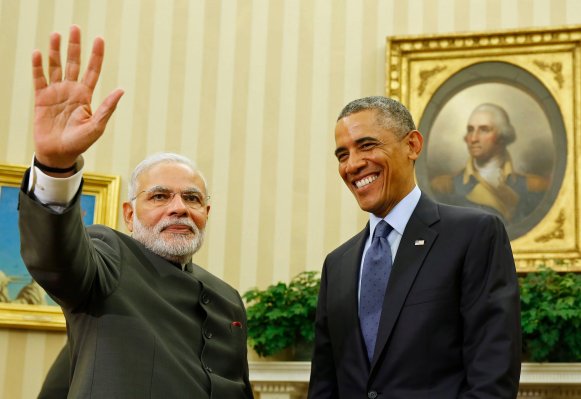 5 Things You Need to Know About Obama's India Visit
Next Up: Editor's Pick