AustraliaWatch a Koala Recover After Being Injured in the Australian Bushfires

Mississippi'We Can Do Better.' Mississippi Governor Orders Closure of State Prison's Ward After String of Deaths

COMPARECARDS
SPONSORED
viralYour Old Scary Memories Live to Haunt You Another Day All Thanks to the 'Me vs. My Childhood Fear' Meme

These Are the Cutest Pictures Ever Published by LIFE

The days preceding LIFE’s December 22, 1952, issue made for a slow news week. The editors could have chosen a photograph of U.S. steel mills or a harrowing image of violence in French Morocco for the cover, but—this being Christmas week—they went with the cutest photograph they could possibly find.

On the cover, three-year-old Cynthia West stands beside three-foot-tall Chauncey, a miniature horse imported from England by animal trainer Willis Parker. Parker’s Lilliput Ranch in California supplied animals for movies and television, and the four 90-pound horses he had transported from Sussex were sure to be a hit not only among producers, but also among neighborhood children like Cynthia.

As LIFE reported, “In California, where everything is usually bigger than ordinary, an animal trainer named Willis Parker decided to reverse the usual situation and establish a ranch where all the animals would be smaller than average.” Once he built corrals for the mini horses, Parker planned to get “miniature deer from East Africa, tiny dogs from Mexico and small ducks from England to provide the horses with suitable company.”

Miniature horses have historically served a purpose beyond cuteness: their small stature made them a good fit for coal mines in 19th century England and America after child labor was outlawed. The horses came to be prized as show animals and pets during the 20th century. While some work as service animals for people with disabilities, they have a few disadvantages. Unlike, say, dogs, the mini horses are livestock animals that fare better in outdoor stables.

Cedric, Chauncey and Ronnie had little Cynthia begging her mother to buy her a mini horse for Christmas. Parker’s animals, alas, were not for sale, dashing yet another girl’s dreams of owning her very own (if very tiny) pony. 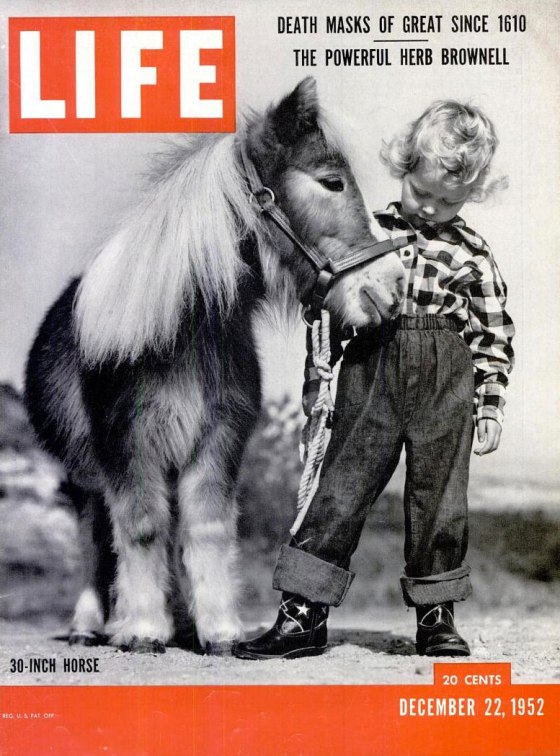