From the set of Selma.
James Nachtwey—Paramount Pictures
Ideas
By John McWhorter

There is a great deal of Black Power on view in Selma. There is little of it in the response to its Oscar nominations. Historians date the beginning of the Great Migration to 1915. That was some serious Black Power. Might we observe the centennial by getting re-acquainted with the proactive spirit that drove it?

It isn’t, for example, that Selma got no nominations: It was nominated for Best Picture. But because no actors in the film were nominated, nor was its director Ava DuVernay, racism is ever with us? But for the past 16 years, a person of color has always been nominated for an acting award. Plus, just last year, 12 Years a Slave, produced and directed by a black man, won Best Picture. In recent years, the Academy has granted Oscars to Denzel Washington, Jamie Foxx, Forest Whitaker, Halle Berry, Lou Gossett, Cuba Gooding, Morgan Freeman, Whoopi Goldberg, Jennifer Hudson, Mo’Nique, Octavia Spencer and Lupita Nyong’o. Try explaining to a child how that body of voters qualifies as “racist.”

If progress has been really happening with the Academy and race, then by sheer logic, the year had to come when acknowledging black achievement became so ordinary and accepted that even a black film ended up being sidelined by matters of glitz and chance. That is, one day black films would start occasionally getting ordinary – and thus imperfect – treatment: think Forrest Gump beating out Pulp Fiction. “Occasionally” had to start with a first time: this seems to have been it.

Clint Eastwood’s American Sniper has a screwy glamor about it for assorted reasons. Some say Selma requires “acknowledgment,” but with 12 Years a Slave so recent, perhaps there was a sense that acknowledgment was less urgent so soon afterward? One may argue, but “racism”? Then also, the Oscar voters were sent the Selma screening copies late.

In 1915, the NAACP was protesting the savagery depicted in Birth of a Nation. A hundred years later, one black film isn’t being feted sufficiently by a notoriously shallow, silly awards ceremony, while still being warmly and urgently celebrated as a signature piece of art in media organs nationwide, and Al Sharpton convenes an “emergency meeting?”

I’m sorry, but this is not what people 50 years ago meant by keeping up the Struggle. The Struggle would mean raising a fuss if we saw a new pattern over time. To cry racism immediately over Selma is not Black Power, it’s Black Tantrum.

And that tantrum is a variation on a theme. For example, the NAACP filed a Civil Rights complaint with the U.S. Department of Education in 2012, which continued getting news coverage through last year. New York City bases admission to its most competitive three public schools on a test. Seeing that only 33 out of 3281 of these schools’ students were black in the 2013-4 school year, the NAACP has declared the tests “racist.”

So, Civil Rights, 21st century-style: If black kids don’t do well on a test, the solution is not to see how we can teach them to do better on it, as can be done. Rather, the higher wisdom is to call for the authorities to get rid of it, make it easier, make it optional, or at least make it count for much less.

But just imagine the whites who founded the NAACP in 1909 sagely declaring that black schoolchildren shall not be expected to pass tests. They would be gleefully held up as grand old racists today. How is this new vision of black intelligence any different? Try to pass the test or try to get rid of it? Black Power or Black Cower? People are watching, and no one respects weakness.

If someone says black people don’t work hard, Black Power does not assert that to even broach the issue is morally unforgivable: one presents counterevidence. Kanye West says we fight the Confederate flag by wearing one ourselves and saying “It’s my flag. What are you gonna do about it?” He’s right for a change: Black Power. Certainly some whites will say some shady little things about our President this year with racial undertones. But what’s more important, some movie executive supposing that Obama likes Kevin Hart (heavens what a slur!), or that as Obama said in his State of the Union, he won two elections? That — Black In Power, as it were — is more important than anything any right-wing talking head can come up with.

I think Dr. King would be perplexed that so often today, via a kind of ideological mission creep, black people have been taught to think of assertions of weakness as strength. He would be even more perplexed to see people who point this out labelled “conservative.” Black Power plows ahead, not backwards. 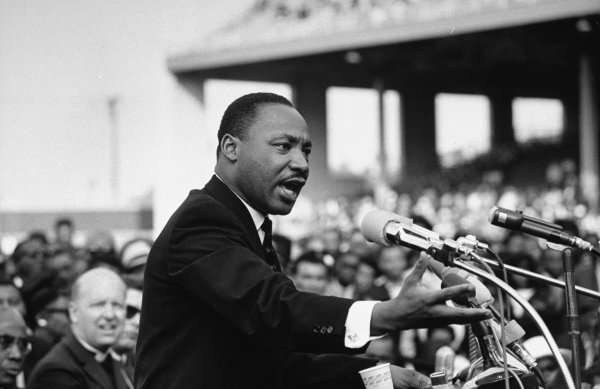 Why I Have Mixed Feelings About Martin Luther King Day
Next Up: Editor's Pick