Artists are different from the rest of us: they make their pain public. Most people conceal their grievances under an official smile, fearful that the airing of any animosities will force confrontations and result in emotional defeat. But aspiring artists don’t care what their parents or peers think. They channel their resentments into a semiautobiographical first novel…

…Or, in Xavier Dolan’s case, a first film. Made when he was 19, with Dolan in the lead role, and detailing the betrayal he felt when his mother got exasperated by his antics and sent him off to a boarding school, the movie bore the ultimate Oedipal revenge title: I Killed My Mother. It fairly burst with teen trauma, and with the unassimilated visual influences of such auteurs of romantic angst as Rainer Werner Fassbinder and Wong Kar-wai. Premiering at Cannes in 2009, the film immediately established Dolan as the enfant terrible of French Canadian cinema. Tomorrow, the world.

Make that today. At a still-precocious 25, the former Montreal child star takes a more mature but endlessly provocative and exhilarating look at the same relationship in Mommy. At last year’s Cannes it shared the Jury Prize with another daring film — the 3-D Goodbye to Language by the 83-year-old Jean-Luc Godard — and finally opens this weekend in U.S. theaters.

Mommy is intimate, emotionally choleric, sensational and a bit loo long (at 2hr.20min.). But its excesses are at the heart of its appeal. Beginning with a car crash and accelerating from there, Mommy administers primal therapy to its viewers and perhaps to Dolan himself.10

As in I Killed My Mother, the embattled mom is played by Anne Dorval. Suzanne Clément, a sympathetic teacher in the earlier film, takes a similar part here. And the role of Dolan’s charming, troubled teen alter ego is brilliantly assumed by Antoine Olivier Piton. This time, though, the viewpoint is reversed. Never condemning the son for his explosions, Dolan portrays the mother as a boundless fountain of tough love. She is Mommy dearest, without the twisted Joan Crawford irony. “Back in the days of I Killed My Mother,” Dolan proclaimed at Cannes, “I felt like I wanted to punish my mom. [But] through Mommy, I’m now seeking her revenge. Don’t ask.”

Widowed for three years, Diane “Die” Després (Dorval) cleans houses and occasionally translates children’s books. Her 15-year-old son Steve (Piton), afflicted with ADHD and given to violent outbursts, has started a fire in the school he’s been assigned to, causing the burning of another young inmate. Now Diane is to be caregiver and teacher to the blond, good-looking Steve. Their verbal battles, waged at maximum volume in a raw Quebec patois, would singe any viewer’s ears. But at heart there is love: in Steve’s buying Diane a necklace with the word MOMMY, and in Diane’s indefatigable championing of her son.

They get unexpected help from their neighbor Kyla (Clément), a high-school teacher on leave for depression, who agrees to tutor the boy. She and Diane get along like loving sisters, especially when they open the box wine and dissolve helplessly into giggles. But Steve, who has harbors improbable ambitions of going to the Juilliard School, hates the idea of sitting still for an education, testing his teacher with rude taunts. When he rips off Kyla’s necklace, she wrestles him to the floor and, her nose to his, fiercely lays down the law. His response is that of a frightened child or puppy: he wets himself.

Steve keeps bubbling with an adolescent sexual tension that threatens to boil over into Oedipal transgression. But in a film whose only two females are maternal figures, the prime, primal theme is the love everyone needs, not the sex everyone wants. “I’m afraid you’ll stop loving me,” Steve tells Diane. She replies with a mother’s melancholy truth: “What’s gonna happen is I’m gonna be loving you more and more, and you’ll be loving me less and less. That’s just the natural way of life.” Set in “a fictional Canadian future,” Mommy is a film about right now and always, about any family’s bonds and how the members fight to strengthen or break them.

Dolan and cinematographer André Turpin chose an unusual screen ratio. Instead of wide screen they went for narrow screen, like a vertical iPhone shot, perfect for capturing the length of a body or the anguish on a face, and to dramatize operatic feelings in a narrow field. In only two sequences does the image expand to the full screen, when Steve or Diane imagines life without social or spatial confines — until the sides of the image start closing, like prison walls around a convict’s dreams.

The Motion Picture Academy committee that chooses the Foreign Language Film shortlist excluded Mommy from its semi-final group of nine. But that is Oscar’s problem, not Dolan’s. Prizes are irrelevant to a film that should hit audiences in their collective gut. Stripping himself of his stylistic borrowings from other directors, Dolan has found his own urgent voice and visual style. Mommy doesn’t aim for classical grandeur. Instead, it bursts through the screen with the rough vitality of real people, in an explosion of suffocating power and surprising warmth. 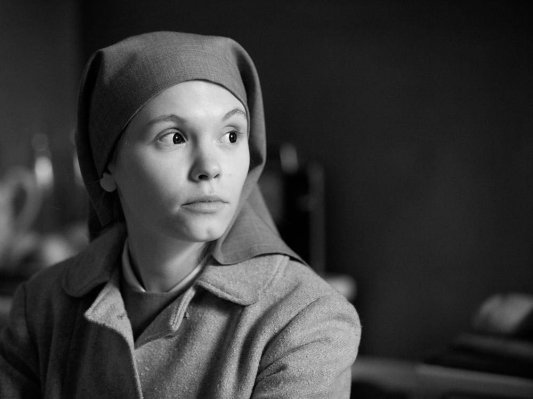 How an 80-Minute Polish Film in Black and White Became a Breakout Hit
Next Up: Editor's Pick