Tom Brady on Deflategate: 'I Didn't Alter the Balls in Any Way'

“I didn’t alter the balls in any way,” he said in a press conference on Thursday.

Brady added that he has a “process” he goes through before games where he chooses which balls he wants to use in the game. After choosing the balls, “I don’t want anyone touching them,” he said.

“I would never have someone do something that was outside the rules,” Brady added.

After the Patriots defeated the Colts, New England was accused of playing with balls that were inflated below league requirements. Subsequent investigations found that 11 of the Patriots’ 12 footballs were, in fact, under-inflated by two pounds of air (psi), based on league regulations, sparking reaction all across the NFL. It was later revealed that the 12th football was also under-inflated, but by less than two psi.

It was reported on Wednesday that the 12 footballs were properly inspected and approved by referee Walt Anderson prior to kickoff.

On Thursday, Patriots coach Bill Belichick said he was shocked to hear about the Deflategate controversy and had no explanation for the under-inflated footballs.

On Monday morning, Brady said he had no idea what the controversy was about, and that the under-inflated footballs were the “last of [his] worries.”

The Patriots will play the Seattle Seahawks in Super Bowl XLIX on Sunday, Feb. 1. at University of Phoenix Stadium in Glendale, Ariz. 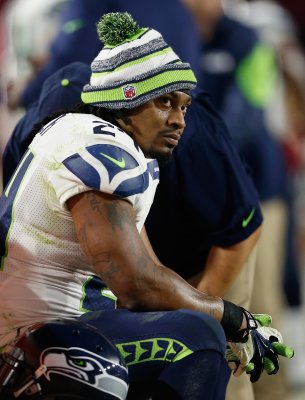 Seahawks Running Back Marshawn Lynch Fined $20K for Gesture
Next Up: Editor's Pick