Yemen's President Resigns as Capital Remains in Hands of Rebels

Yemen's President Abdel Rabbo Mansour Hadi stands during a reception ceremony during the holy fasting month of Ramadan at the Republican Palace in the Yemeni capital, Sana‘a, on July 7, 2014
Khaled Abdullah—Reuters
By Noah Rayman

The Associated Press and Reuters each reported President Abdel Rabbo Mansour Hadi’s resignation, citing unnamed Yemeni officials. Shi‘ite rebels known as the Houthis had held the city since September while allowing Hadi to remain in his post, but the collapse of negotiations this week prompted violent clashes and led to the seizure of the presidential palace by the Houthis, and Thursday’s reported resignation.

The Yemeni Cabinet also resigned on Thursday as the government’s standoff with the Houthis showed no sign of letting up, despite indications on Wednesday of a deal to accelerate power-sharing reforms. The Houthis now appear to be pulling the strings in Sana‘a.

The turmoil in the capital threatens to further divide the impoverished country, where al-Qaeda in the Arabian Peninsula (AQAP), one of the terrorist network’s most powerful affiliates that claimed responsibility for the Charlie Hebdo attack in Paris earlier this month, has a foothold in the south.

Hadi was among the U.S.’s most important regional allies in the fight against al-Qaeda, and his ouster threatens to upend U.S strategy there. The Houthis, members of a Shi‘ite minority in northern Yemen, oppose the Sunni extremists, but are also unlikely to seek an alliance with the U.S. They have been critical of Hadi’s dependence on U.S. support, and their motto reads in part, “Death to Israel, Death to America.”

Meanwhile, the rebels’ growing influence in Sana‘a threatens to marginalize Sunnis in the deeply fractured country and boost support for al-Qaeda. “The Houthis victory also ironically benefits AQAP by polarizing Yemen, the poorest country in the Arab world, between Shia and Sunni, with AQAP emerging as the protector of Sunni rights,” Bruce Riedel, a senior fellow at the Brookings Institution, wrote in a blog post earlier this week. 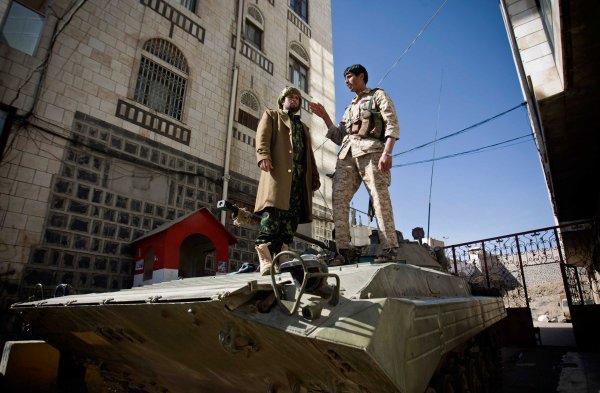