Senate Minority Leader Harry Reid (D-AZ) speaks during a pen and pad session with reporters at the US Capitol on Jan. 22, 2015 in Washington D.C.
Mark Wilson—Getty Images
By Alex Rogers

Senate Democratic Leader Harry Reid held his first press briefing at the Capitol on Thursday since spending several weeks nursing broken ribs and shattered bones above his right eye. He said that he hopes to come back “full-time” a week from Monday, when he is undergoing eye surgery, and appeared in good spirits.

“I broke four ribs, but that—so minor,” he said. “They’re so meaningless it’s hard to believe.”

Reid fully outlined how he was injured in his new Nevada home on New Year’s Day. “I was doing exercises that I’ve been doing for many years with those large rubber bands and one of them broke and spun me around and I crashed into these cabinets,” he said. “And injured my eye. It didn’t knock me out but it sure hurt. I was taken to the hospital and came back here after a couple of days.”

He declined to answer a question about whether or not he was considering a lawsuit (“Let’s say if I were I wouldn’t be broadcasting it here”) and said the recovery is going well. He is walking for up to an hour now and has been listening to books on tape to rest his good eye. He occasionally takes Tylenol and hasn’t been receiving treatment for his concussion. He also said he appreciated a call from Israel Prime Minister Benjamin Netanyahu, who will address a joint-session of Congress in March. Reid even opined about the ball-deflation controversy surrounding Sunday’s AFC championship game between the New England Patriots and the Indianapolis Colts.

“As far as I know, I can’t believe that the National Football League, worth the billions of dollars they make, couldn’t at least determine how much air should be in a football,” he said. “I don’t know why it should be left up to the teams.”

Reid said he still plans on running for reelection in 2016. 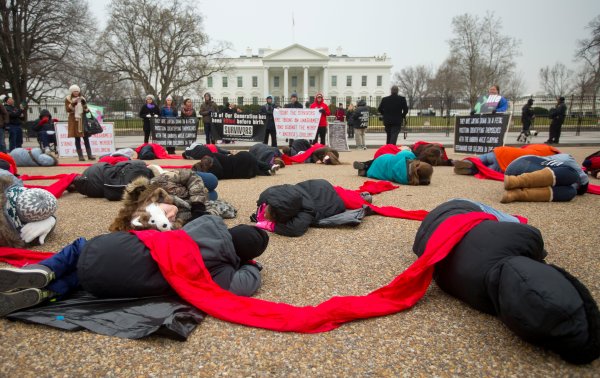