Microsoft got plenty of attention Wednesday for its eye-catching HoloLens, a headset that projects 3-D content into the world around you. But it also unveiled another innovation at its Windows 10 press event that serves a much more pressing purpose: Fixing terrible business meetings.

Microsoft’s new Surface Hub is a massive, Windows 10-powered tablet that takes the whiteboards, speakerphones and video-conferencing solutions that slow down your meetings and packs them into an 84-inch touchscreen 4K display, or for a tighter squeeze, a 55-inch 1080p display. It’s wall-mountable, but Microsoft also sells various Hub-friendly stands.

Because the Surface Hub simulates so many familiar conferencing tools, it’s a breeze to use. The whiteboard app detects the minutest movements of the stylus across the screen, and notes can be saved to the cloud. Presentation materials can be wirelessly shared to the Hub from any participant’s Windows- or Android-powered device, eliminating the time-suck of physically connecting a laptop to a projector.

Then there’s the ultimate bane of the business meeting: The dial-in callers who pile into a single conference line and announce their presence with a mysterious ding. The Surface Hub replaces all that with Skype videoconferencing, with participants appearing in a tidy stack on either side of the screen while dual cameras ensure callers have a clear view of the conference room.

Microsoft is pitching the Surface Hub as a corporate time-saver, claiming it can whittle down the time it takes to set up a meeting from 12 minutes to a few seconds. But aside from the time savings, the really intriguing application of the Surface Hub is how it changes the way users interact with a presentation. It’s surprising how the simple act of marking up a slide or manipulating graphics can bring a story to life. I lost two minutes tinkering with a meaningless chart of coffee sales because I couldn’t resist dragging and dropping new views of the data into the center of the screen. Even more intriguing was 3-D models of engine parts, which could be rotated with a twist of the hand, giving engineers an opportunity to accelerate conversations about design tweaks.

The Surface Hub might look familiar to you: It was the brainchild of digital touch screen guru Jeff Han, who developed the Election Day touch screens that first cropped up on CNN, giving political analysts a new way of fiddling through voting data in red states and blue states.

Han says no shortage of potential business users contacted him after the election looking for similar tech for their conference rooms. But the massive touch screens were forbiddingly expensive, with costs running upwards of $80,000. Microsoft bought Han’s company, Perceptive Pixels, back in 2012, and got to work bringing down the screens’ price into the realm of an “enterprise” budget.

Still, Microsoft hasn’t said how much the Surface Hub will cost — or when exactly it’ll go on sale. For now, Microsoft will only say it’ll hit store shelves “later this year.” 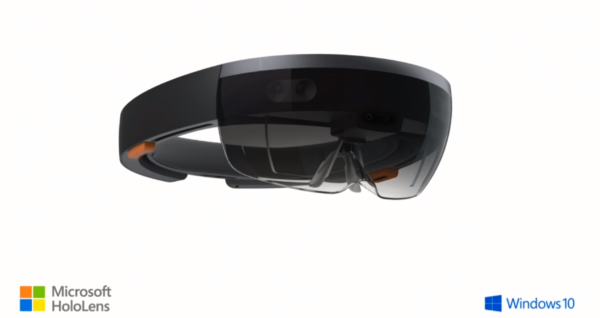 Microsoft Just Unveiled a Futuristic Headset That Beams 'Holograms' Into Your Room
Next Up: Editor's Pick