The Boy Next Door Star Ryan Guzman: You're Supposed to Laugh at My Movie

In The Boy Next Door, Jennifer Lopez plays a teacher who, while estranged from her husband, falls into a brief affair with a student at her school. She lives to regret it: that student, Noah Sandborn (played by Ryan Guzman) pursues her violently and seeks to sabotage both her professional and personal lives. It’s heavy stuff — but Guzman wants to make sure you’re laughing.

The actor described to TIME the manner by which a screenplay by a former assistant U.S. attorney became a movie in which a high school student cracks life jokes and in which side characters are developed into full-fledged eccentrics. “There are so many lines in this film that are stupid for the sake of being stupid,” Guzman said, “to show some levity in the film itself.”

After all, the material is serious; though the movie is scrupulous about making clear Lopez’s character isn’t breaking laws (her student is 19), both her character and Guzman’s make terrible decisions at different moments. Guzman claims he studied serial killers in order to inform a character who, at the movie’s beginning, appears charming and innocent, only to become one of the most memorable B-movie villains in recent years. TIME spoke to Guzman as he prepared for The Boy Next Door‘s Jan. 23 release.

TIME: In this movie, you play a student more concerned with studies as a means to an end — specifically, your teacher. What kind of high school student were you?

Ryan Guzman: I’m going to be very candid. I was lackadaisical. I was one of those jocks. High school was one of those times I came into my own, and girls paid me attention. I paid more attention to girls than school, which obviously is not a good thing to do. I was a baseball player, and between that and girls, I had my priorities straight.

But in this film, Noah Sandborn is extremely intelligent. He knows so much, so if he doesn’t know it, he’ll figure out how to get to it. He figures himself out, he’s very interested in the classics and learning more. He uses that to get into Claire’s life.

Did you base the film off of any other performances, or anything from reality?

It was a mix of both. I started by watching Fear, and basing the first part of Noah off of Mark Wahlberg. That was the base. But I decided to make it my own, and not use too much of that. I did a lot of research. I researched serial killers, and the psyche of 19-year-old boys. It was a melting pot of things for Noah Sandborn.

Do you think fans from your other projects, like the teen soap Pretty Little Liars, will be scared by your performance in this movie? Do you worry about a lasting impact on your career — that you’ll bring back memories of psychotic behavior?

I hope they say that. I hope they get really scared. It means I did my job as an actor. That’s why I rely on these interviews for people to know who I really am. It’s all part of the job, me tapping into some character. Luckily for me, I have films coming out after this. In one, I play a funny guy, and then I play a nice, good guy. They won’t be scared for too long.

There are a lot of tonal shifts in The Boy Next Door; your character changes so much from beginning to end, to put it mildly. Was it difficult to nail both the charm and the menace that comes later?

It’s always kind of difficult to go back and forth. You never want to play this character with one tone the whole time. That’s not how people with problems in their lives deal with things. They have a mask — that’s what I’ve come to learn from my research. People with psychotic thoughts put up a front to people around them to seem inviting and welcoming. When the people they welcome into their lives get to know them, that’s when you see the true beast. It’s like a ping-pong match in their minds, and when you go too far with them, they go at the other person with all their might. That was the premise of Noah Sandborn — in his mind, he’s justified in everything he did.

Did the character stay with you off-set?

It kind of was difficult. On set, when they called “Cut,” I went back into being me, and having a good time. It was when I went home, by myself, because I wanted to put everything into [it] — I couldn’t stop thinking of ways to develop this character. Without me realizing it, it changed the way I perceived things. But because that character is so far from who I am, it wasn’t hard to get back to being me.

So it was easy getting along with Jennifer Lopez even though, in character, you menaced her so much?

As soon as [director] Rob Cohen called “Cut,” I was back to being stupid and idiotic and making everybody laugh. We had great chemistry. We never had any problems.

Are there preconceptions when it comes to working with someone so famous?

There were quite a few things. You hear all these rumors that someone as big as her could be a diva — these nasty things that get embedded in your head. They cut off any chance to get to know the person. I pushed those things back and got to know her, and she is the sweetest, kindest, most loving person.

It’s a risky role for her, too. Do you think the movie manages to make her character — a high school teacher who sleeps with a student — sympathetic?

Everybody makes mistakes, some bigger than others. I’m not promoting that people sleep with their students. But her character can be very relatable. Whether you take that aspect or not, you can see she’s a woman down on her luck. She’s got a failed marriage, her husband cheated on her, her life is falling apart. She’s just looking for some avenue of happiness. She finds herself extremely weak when Noah Sandborn seduces her and takes away her inhibitions and makes her do something she later regrets. Everybody has been in that position where life is too hard, too tough. And you make a choice that wasn’t the greatest, but later in life, you realize you won’t do that again.

Fatal Attraction, Fear, this is kind of… Most people are used to the woman being the protagonist in these sort of films. We sort of switched it and told what I think is more relatable, with young men sleeping with their teachers so often nowadays in the news, which is kind of crazy. There are so many different films that could help out [influencing] this film. But we wanted to separate ourselves and create something that was going to be memorable and pure entertainment in a thrilling fashion.

When I saw the film, the audience was openly laughing in moments; for a movie that required research, it’s also at times comical. Was that purposeful?

There are so many lines in this film that are stupid for the sake of being stupid, to show some levity in the film itself. If you take something too seriously… Because our whole point is to scare you. Rob Cohen did an amazing job of finding that balance, throwing in these quick one-liners to spur at least a smile. We want you to laugh. 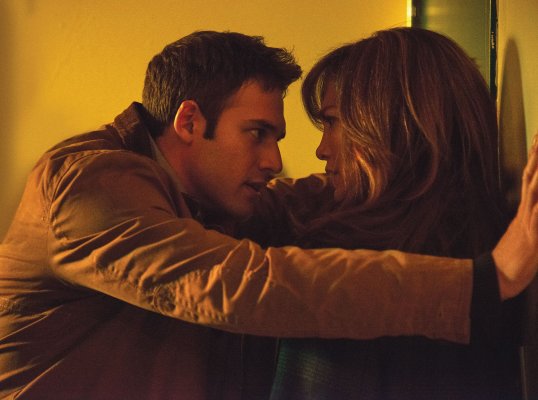 The Boy Next Door Is the Bad Movie Hollywood Needs Right Now
Next Up: Editor's Pick