Patriots Coach Says He Was 'Shocked' By 'Deflategate'

New England Patriots head coach Bill Belichick said Thursday that he was shocked to hear about the Deflategate controversy and had no explanation for the under-inflated footballs.

Belichick said he had no knowledge of the footballs being under-inflated before the game. He also said the team practices with footballs that are difficult to handle.

“I think we all know that quarterbacks, kickers, specialists have certain preferences on the footballs,” Belichick said. “They know a lot more than I do. They’re a lot more sensitive to it than I am. I hear them comment on it from time to time, but I can tell you and they will tell you that there’s never any sympathy whatsoever from me on that subject. Zero. Tom’s personal preferences on his footballs are something that he can talk about in much better detail and information than I could possibly provide.”

Belichick said the team will put more air in footballs in the future to avoid having a ball drop below the minimum air pressure of 12.5 pounds per square inch. He also said the Patriots have cooperated fully with the league’s investigation.

The Colts started questioning the footballs after linebacker D’Qwell Jackson intercepted Tom Brady in the second quarter and told the team the ball seemed flat. The Colts then informed officials about the problem, eventually leading to the league’s investigation.

Several players on the Baltimore Ravens also reportedly believed balls were not properly inflated for their divisional playoff game against the Patriots.

Patriots quarterback Tom Brady dismissed the controversy as the “last of my worries.”

The Patriots play the Seattle Seahawks in Super Bowl XLIX on Feb. 1. 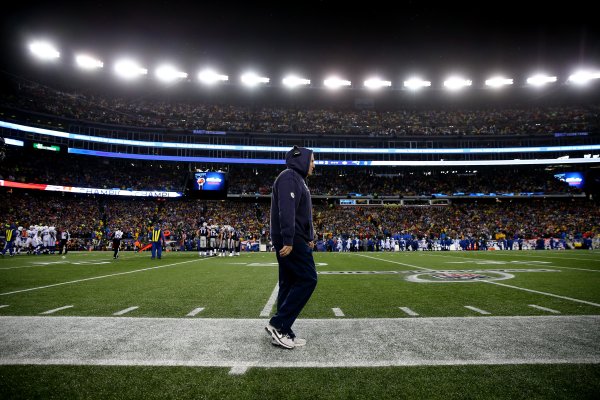 Pressure Builds on Patriots Amid 'Deflategate' Scandal
Next Up: Editor's Pick