I’m not an introspective guy. When people invite me to lunch, assign me work or read my column at the doctor’s office, I assume it’s because they love me unconditionally. But during my junior year at Stanford, I was bedeviled by insecurity. My girlfriend dumped me. My parents broke up. And the night they called to tell me, a girl pity-made-out with me, during which I leaned over my loft bed to put Peter Gabriel’s Passion in my five-CD changer, fell to the floor and sliced my foot open on the net of the arcade football-tossing game I had stuffed into my dorm room to try to make friends.

So in 1992, when my friend Martha Brockenbrough, the editor of our school paper, used the Family Educational Rights and Privacy Act to force the admissions office to show students the comments it had jotted on our applications, I, in my ego-weakened state, signed up, desperate to find out what people liked about me. Afterward I wrote a column about the horrors I read, and shortly thereafter Stanford began a policy of shredding all applications. But now that applications are filled out online, the school once again has all the records stored, digitally. So once again, Stanford students are using the law to gain access to the notes on their applications. If journalism is the first draft of history and history is doomed to repeat itself, then I am doomed to write the exact same column I wrote in my junior year of college.

I called the current student who forced Stanford to do this, in order to stop him or her. He or she started a funny email-only campus newsletter in September called the Fountain Hopper, which, he or she said, requires total anonymity on his or her part. Not because he or she is worried about getting in trouble with the administration, but because he or she is nervous about a satirical newsletter being the top Google result for the rest of his or her life.

To persuade him or her to reconsider, I told him or her the story of my own torture. Back in 1992, I walked into the admissions office, most likely unshowered, eating pizza and holding a book I’ve still never read. I was led to a room with 11 other misguided souls and given 30 minutes with a folder that I was told I was never meant to see. For people clever enough to select the smartest kids in the country, the admissions office knew very little about reverse psychology.

The first thing I noticed was the word swim circled in red. I was told that swim was Stanford’s term for the pile for applicants whom the admissions committee disagreed about, left in the middle of the water awaiting their fate. The comments included “He could drive you crazy.” “Not appropriate.” “Hormonal overdrive.” And “Not especially funny.” The most encouragement I got for my swim, which was apparently across the English Channel, were two smiley faces. This was before emoticons were popular, so they were hand-drawn and, therefore, if it’s possible, even more patronizing.

I asked to see what I had written in my essay to cause this reaction. In response to the admittedly creepy prompt “Is there anything else we should know about you?” I wrote a “Top 10 Other Things You Should Know About Joel Stein,” which included, “Babes will be coming in and out of the room so often it’ll seem like the bus depot across the street from Barbizon.” Way worse, an essay I wrote included the line “I was using humour as a crutch; trying to hide some of my insecurities behind a barrage of jokes instead of facing my fears.” If they wouldn’t do it, I’d have to drown myself. It’s bad enough to speak with a fake British accent. It’s unacceptable to spell with one.

My story, however, didn’t convince the young man or woman leading current students to their downfall. Frustrated at the folly of overeducated youth, I took solace in the fact that at least I am no longer 20 and desperately seeking strangers’ approval. Besides, now that I’ve had a successful writing career, I’m sure Stanford is thrilled it accepted me. Pretty sure. But it would be even better to find out.

So I tracked down the former admissions dean, Jean Fetter, while she was in Paris with her husband Steven Chu, the former Secretary of Energy and Nobel Prize–winning physicist, who was there as a keynote speaker at the opening ceremony of UNESCO’s International Year of Light and was the one I actually bothered since his email was easier to find. Dean Jean wrote me right back, confirming my assumption that she too has been thinking about this for 25 years. “If you read your file you know I admitted you with foresight: ‘This young man will make us all laugh while dispensing wisdom,'” she wrote. “So yes I’d do it again, although I’m thankful not to be responsible for selecting 5% of 42,000 applicants of 2014 and can’t guarantee how you would fare in those circumstances.” Seriously, you never want to find out what people really think of you.

I hope Stanford will shred its digital files and let students return to having no idea what their strengths and weaknesses are. Otherwise, someone else is going to find out they’re not funny and waste their career desperately, annoyingly, inappropriately trying to prove otherwise. 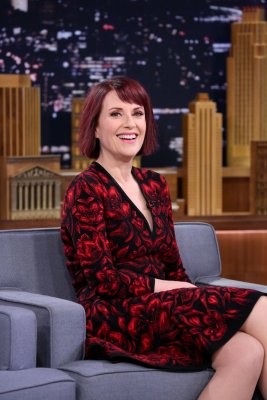 Megan Mullally's 15 Ways to Digitally Detox
Next Up: Editor's Pick