On Dec. 8, 47-year-old Utah Republican Jason Chaffetz and his wife Julie were invited to one of the White House’s annual holiday parties. Lamb and eggnog were served, carols were sung, and dozens of pictures were taken with a smiling President and First Lady.

That night, Chaffetz says, he buttonholed President Obama’s chief of staff, Denis McDonough. He had a message to deliver, a warning packaged as a tip from the new friendly face of the White House’s top congressional nemesis, the House Committee on Oversight and Government Reform. “If I’m a House Republican from Utah and I know more about the Secret Service than you do, that’s a problem,” he says he told McDonough. “You’ve got a problem.”

Less than three months earlier, a fence jumper with a knife had run past the Secret Service into the very building where the two men were speaking. In the aftermath of that incursion, Chaffetz expressed outrage about a separate, previously undisclosed incident in which agents had allowed a contractor with a gun and an arrest record to ride in an elevator with Obama. At a public hearing, Chaffetz forced the Secret Service’s then director, Julia Pierson, to admit that she had not briefed the President after the elevator breach. She resigned the next day.

McDonough, who declined through a spokesperson to comment on the encounter, may have taken Chaffetz seriously after all. In early January, the Obama Administration continued its overhaul of the agency’s leadership, dismissing four senior Secret Service administrators, including the head of presidential protection.

That shake-up was the first clear win for congressional oversight since the GOP took control of the House in 2010. And it was an even clearer win for Chaffetz, who was promoted to chairman in December over more senior competition.

Republicans say they benefit from Chaffetz’s style. He is the watchdog you want to pet, never losing his smile even as he accuses Obama aides of the most grievous tyrannies. “You can get a lot more done when you are a happy conservative,” says Kevin McCarthy, the third-ranking Republican in the House. “He’s very refreshing.”

Most anyone who had a bad year in the right-wing press–Homeland Security Secretary Jeh Johnson, say, or Obamacare adviser Jonathan Gruber–had to face a public grilling by Chaffetz. He was one of Congress’s loudest voices when it came to investigating the attack on the U.S. consulate in Benghazi, Libya (he suggested it could lead to Obama’s impeachment) and has called for an end to the TSA’s use of full-body scanners at airports.

Now he says he plans to continue the committee’s investigations into IRS political profiling and the Bureau of Alcohol, Tobacco, Firearms and Explosives’ Operation Fast and Furious “gun walking” scandal. He’ll also hold hearings on embassy security, one of his pet causes.

Old stories, yes, but with a new spin. Chaffetz is expected to fill the new legislative session with big-deal ruckuses, using them to explain, ahead of the 2016 election, just how bad Big Government can be. The question for Republicans is whether the new guy will be able to get results.

Chaffetz says he is ready to go. “The secret to good communications lies in authenticity,” he says about his approach to the job. “You see those car commercials with Matthew McConaughey? I’ve always loved the guy and hope someday to meet him. Now I’m going to buy a Lincoln.”

The Underdog of Oversight

The House Oversight Committee has essentially unlimited investigative jurisdiction, and it has hosted notable recent hearings on everything from steroids in baseball to faulty gas pedals in Toyotas. The committee generally pushes for more federal transparency and less bureaucracy.

But when the government is divided, the committee’s investigations tend to scour the Executive Branch. For example, Clinton-era chairman Dan Burton, a Republican, filed more than 1,000 subpoenas against the White House. In this modern moment of gridlock and grandstanding, there may be no better gig in Congress.

Chaffetz has subpoena power at his disposal, allowing him to command appearances and government documents. He also has a $5.4 million payroll and scores of whistle-blowers who he says hail from all corners of the federal government.

And he’s starting with a fresh reputation. Chaffetz’s predecessor as chairman, Representative Darrell Issa, often tripped over himself. In 2012, he memorably refused to admit law student Sandra Fluke to a hearing on religious liberty and contraception. The panel pressed on without a female witness.

Issa was undone, ultimately, by the danger that faces any prosecutor: If you shake enough witnesses with enough force, someone will crack. But shake too hard while failing to deliver and you become a villain, a caricature that Democrats gladly sketched. Former White House aide David Plouffe once mocked Issa on Twitter as “Mr. Grand Theft Auto,” alluding to a 35-year-old indictment against Issa in Ohio that was never prosecuted.

Anthony Weiner, the former Democratic Representative from New York who resigned after a sexting scandal in 2011, knew Chaffetz well while they were in Congress together. He expects him to avoid the trap that caught his predecessor. “You know the drawing of evolution?” Weiner says. “Issa’s the caveman all the way on the left, hunched over. Chaffetz is all the way on the right, walking upright, just like you and me.”

In Chaffetz’s six years in Congress, he has won the respect of his Democratic peers. While Issa once cut the microphone of the committee’s ranking Democrat, Elijah Cummings of Maryland, Chaffetz and Cummings paid friendly visits to each other’s districts in August, bonding over, among other things, the impact of cancer on their respective families. “Although we have disagreements, I have always found him to be nondisagreeable,” Cummings told TIME after the trip.

Since taking over, Chaffetz has made a show of disavowing Issa’s legacy, replacing the committee-room portraits of his predecessors, including Issa, with photos of Utah, postal workers and the Lincoln Memorial. When Issa was asked where his portrait would now hang, he replied, “Well, I know the Administration would like to hang me. So perhaps you could check with Obama.” Wall decorations aside, Obama Administration officials scoff at the idea that Chaffetz will be different from Issa.

Chaffetz–pronounced chafe-its, although he gets “Chavez” a lot–was born outside San Jose, Calif., in 1967. His mother Peggy ran a photography business. His father John was a businessman and a Zelig of the California sports scene. Dodgers legend Sandy Koufax is Chaffetz’s godfather.

In high school, Chaffetz traded playing soccer for kicking footballs. He was good enough to earn a scholarship to Brigham Young University, then the defending national champion, in Provo, Utah.

“I had heard of Donny and Marie, and Gary Gilmore,” Chaffetz says. “But otherwise Utah was a foreign country.” He wound up loving it, and was baptized as a Mormon after college. His first taste of politics came in college from an unlikely source: Democrat Michael Dukakis, whose 1988 presidential campaign he co-chaired in Utah. (It was more about family than ideology: the Massachusetts governor had married John Chaffetz’s first wife and adopted Jason’s half brother.) Of all 50 states, Dukakis did worst in Utah, but the proximity to power had piqued Chaffetz’s interest . After working in corporate communications for Nu Skin, the skin-care-product marketer, and elsewhere in the private sector, he landed a gig as Jon Huntsman’s campaign manager in his successful gubernatorial campaign.

Four years later, Chaffetz became a candidate for Congress, pitching himself to Utah Republicans as a Tea Partyer before there was such a thing. He pushed English as the national language and opposed amnesty for illegal immigrants. His grassroots effort unseated a six-term Republican incumbent in Utah’s Third Congressional District during the state convention and primary, making him a sure general-election bet in what is often the nation’s reddest state.

It takes 7½ hours, Chaffetz says, to drive from one end of his district to the other, so he’s often found behind the wheel of his Ford F-150 truck. His district is the country’s youngest, and Utah has the nation’s highest birthrate, by far, and the fourth lowest unemployment rate. Like him, many of Chaffetz’s constituents are Mormon. He says the religion’s reputation for clean living has been an asset to his career. His only vice, he says, is fast food, in particular the burger joint Five Guys. “Every time I eat with the guy, I wonder how he’ll make it to the end of his term,” says Trey Gowdy, the South Carolina Republican whom Chaffetz considers his best friend in Congress.

Tech companies have taken advantage of the cheap land and educated workforce around Provo. It’s what Chaffetz wishes the rest of the country looked like. As we drive together on a nippy December afternoon a few days after the White House Christmas party, he points out the just-opened offices and shopping centers amid the still vacant grassy lots. It’s like driving through a postcard: jobs are plentiful, business is booming, and everyone is young, happy and well educated.

And there are porcupines. When he’s at home, Chaffetz likes to shoot wildlife–with a Canon Rebel T1i and a long lens. The hunt for a good photograph, he says, challenges him more than hunting to kill. The animal needs to give the photographer the right look in the right light.

Chaffetz has never been able to photograph the spiny, mustard-colored rodent, though. And this safari through a Park City real estate development seems to be no different. “I want to get the porcupine,” he says. But we have been driving, necks craned, for more than an hour and have seen no such thing. Deer and elk, sure. Sunset is closing in. Will he find one? Chaffetz’s 14-year-old daughter Kate, his most trusted photo assistant, seems skeptical.

But two minutes after his proclamation, Chaffetz spots a bushy clump nestled in the branches of a bare tree: a porcupine. He approaches the tree slowly by walking around it in a circle, reducing the radius with each step. He is not happy, though, with what he is getting. The snaps have no drama; the motionless porcupine might as well be dead. He gets closer and closer. Still, he doesn’t like what he sees.

So he crouches underneath, with maybe three feet between his familiar mug and the animal’s many needles. “I can see its face,” he says. “It’s breathing.” Chaffetz positions his camera in front of his face and aims it upward, turning his 55-mm lens on the standoffish critter. If things break his way, he’ll have a print to be proud of. And if they don’t, the man who will soon zoom in on the White House will end up in the hospital, gauzed and chastened.

–WITH REPORTING BY ALEX ROGERS/HERSHEY, PA. 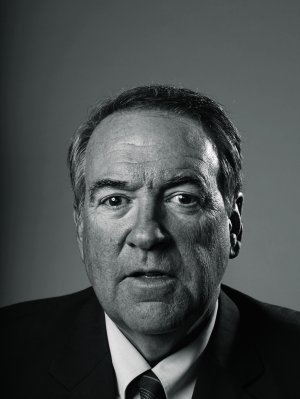 Mike Huckabee’s Encore in Iowa
Next Up: Editor's Pick