Skulls are stacked on top of each other at a Killing Fields memorial in Batey district in Kampong Cham province, 125 km (78 miles) east of Phnom Penh on March 28, 2009
Chor Sokunthea—Reuters
By Charlie Campbell

In the 1970s, Khmer Rouge guards would drink wine infused with human gallbladders, according to a survivor of Cambodia’s infamous Killing Fields.

Former detainee Meas Sokha told the Extraordinary Chambers in the Courts of Cambodia Khmer Rouge (ECCC) — a special tribunal created to investigate the atrocities of the Khmer Rouge regime — that guards at a prison in Takeo province would dry out the gallbladders of inmates and steep them in wine, reports the Cambodia Daily.

“Whenever there were killings, the guards would drink wine with a gallbladder. I could see gallbladders drying in the sun and I knew these were from human beings,” said Meas Sokha, who was imprisoned for three years in 1976. “There were so many [gallbladders] dried by the fence, it was put in wine for drinking and to make people brave.”

Sokha also told the U.N.-backed ECCC that he witnessed between 20 and 100 killings in a single day.

In some East Asian medical traditions, the use of animal bile in drinks — usually snake or bear bile — is thought to promote virility.

From 1975 until 1979, Cambodia experienced one of the most savage genocides of the 20th century, during which around 1.7 million people — a quarter of the national population — perished as the Khmer Rouge, the nation’s communist party led by the French-educated Pol Pot, pursued its agrarian utopia.

The court is currently investigating genocide charges against Khieu Samphan, 83, the regime’s head of state, and Nuon Chea, 88. Both were sentenced to life in prison for crimes against humanity in August. 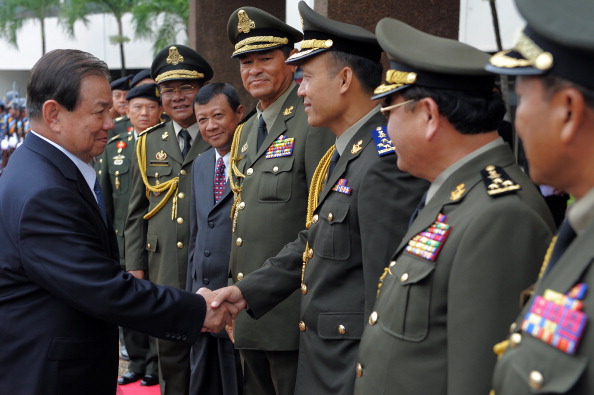